Indonesia's invitation to invest in exploration and development opportunities

Through this offering, the country aims to further explore identified prospects, monetize previous discoveries, develop fields with an already-approved plan of development (POD), and achieve target production of 1 MMbo/d and 12 Bcfg/d by 2030.

The opportunities and options on offer are:

Assets to be offered

A total of two DevOps will be made available. DevOp 1 is situated onshore in Central Sumatra. The block area was previously covered under the Kisaran PSC and contained the Parit Minyak field, which was under development plan, however it was later cancelled because of uneconomical market price conditions at the time. DevOp 2 is in the Tarakan Basin previously covered under the Bengara I PSC. The block contains the South Sebuku field, which received POD approval in 2013. Nearby, there are planned facilities such as an LNG plant on Mandul Island and a methanol plant in the Bunyu area.

There are four DROs to be offered: DRO 1, DRO 2, DRO 3, all located onshore, from Central to South Sumatra, and DRO 4 in northern Kalimantan. Of all the four AOIs, one is in eastern Kalimantan, while the remaining three are in southern Sulawesi.

DRO 1 is situated in Central Sumatra, in an area where existing infrastructure and markets are available. Gas produced can be connected to existing facilities in Seng-Segat field for consumption in the Riau Province. There are a total of 10 prospects/leads identified in the area, namely Langite, West Lirik, Rono, East Rono and Kuala-Kuala Tinggi (gas prospects), Southeast Napuh and East Napuh (oil prospects), Sei Lala Lead (gas), Kelesa Lead 1 and Kelesa Lead 2.

DRO 2 is located onshore in South Sumatra, neighboring with PetroChina's Jabung block and Pertamina's assets. Potential development could be a tie-in gas pipeline to the producing fields in the Jabung block. Identified prospects in this area are Tiung Extension, Manismata, Northeast Berkah, Southeast Berkah, Kemala, Rafa and North Tuba Obi, with total recoverable resources of over 400 MMboe.

DRO 3 is close to the proximity of the Sumatra-Java pipeline facility. One potential commercial discovery (AK-1, gas) and four non-commercial discoveries (Ruas-1, Kerah-1, Sekunyir-1, Imus-1) were drilled previously. One prospect and 11 leads have been identified in the area. Main reservoir targets in the area are Talang Akar and the Batu Raja formation, although the latter reservoir is known to contain high CO₂.

DRO 4 contains the Aster (oil and gas) and Tulip (gas) discoveries. More appraisal wells were drilled in the two structures to confirm the multi-layer reservoir potential in the deepwater zone. Potential development scenario for oil case is utilizing an FSO or pipeline to Bunyu island oil facility for processing. For gas case, production could be channelled via pipeline to a petrochemical factory on Bunyu Island (~ 90 MMcfg/d needed for 20 years). Prospects identified in the area are Melati, Aster East, Borago, Gardenia, and Kana Complex.

AOI K-01 is situated north of Balikpapan city and west of Mutiara field. Three potential prospects identified in the area are Lala, Fiki and Dayana with total potential recoverable resources of 1,195 MMboe (P50). Potential play targets in the area are Early Miocene to Oligocene clastics with structural closure trap, analog to the nearby Mutiara, Samboja and Sanga-Sanga fields.

AOI B-02 is located on the western side of the Bone Gulf open area, bounded on the eastern side by the southern arm of Sulawesi. Seismic data available in the area has a density of 5 to 6 km between lines with some acquired between 1990 and 2000s. Identified prospects are in the offshore area: Ssi-2.4.F.d (Maniang carbonate, 44 sq km), Ssi-6.4.C.d (delta, 210 sq km) and Ssi-3.4.F.d (190 sq km). Infrastructure and smelting industry are available within the area.

AOI B-03 is located in the eastern side of the Bone Gulf open area, bordering in the west with Sengkang PSC, operated by Energy Equity and partner Energi Mega Persada. Seismic data available in the area has a density of 2 km between lines with some acquired between 1990 and 2000s. Key identified prospects are in the offshore area: Ssi-2.4.F.d (Maniang carbonate, 44 sq km), Ssi-6.4.C.d (delta, 210 sq km) and Ssi-3.4.F.d (Kabena carbonate, 190 sq km). There are also a total of 41 leads identified in the block area. Infrastructure and smelting industry are available within the area. 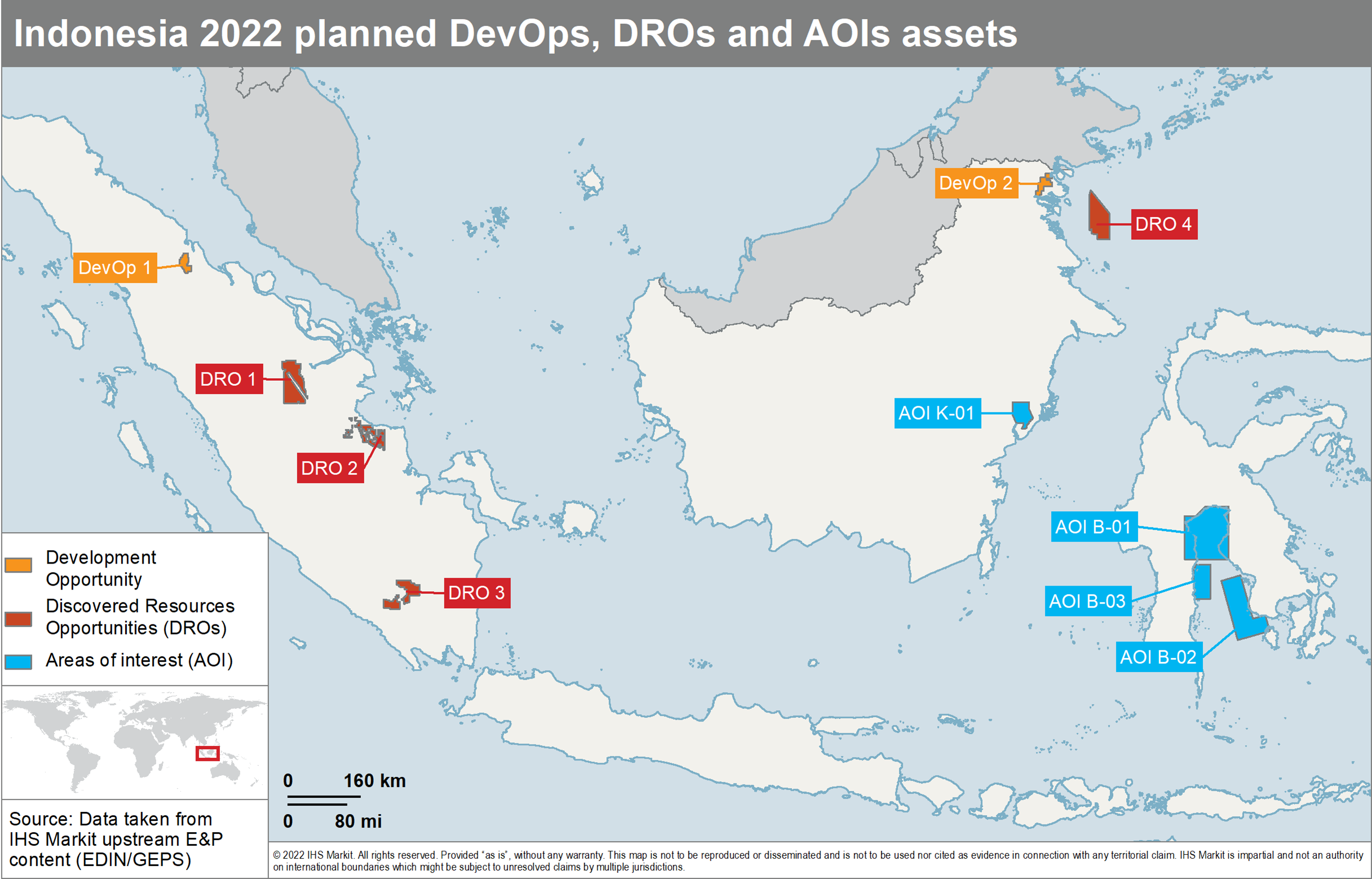 Further information on opportunities and ongoing E&P activity in Indonesia and worldwide is available via our Upstream Intelligence solutions.