The manufacturing downturn in Indonesia deepened in October, sending a warning signal of a further growth slowdown at the start of the fourth quarter. Both factory production and new order inflows decreased at the fastest rates since late-2015, and the survey also brought signs that demand conditions are set to weaken further in coming month.

The headline IHS Markit Indonesia manufacturing PMI fell to 47.7 in October, down from 49.1 in September, to indicate the sharpest deterioration in the health of the sector for nearly four years. The latest reading points to a fourth straight month of manufacturing decline, which represents the longest downturn since early-2016.

The headline PMI is consistent with the annual rate of GDP running below 5% in October, suggesting that growth risks are tilting to the downside for the rest of the closing quarter of 2019. 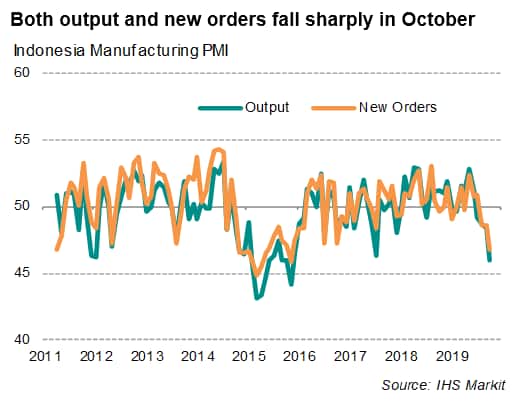 Adding to the near-term gloom were firms' policies towards hiring and purchasing activity. Job cuts were recorded at a rate not seen for two years, with the latest employment decline the fourth month in a row. Input purchases were meanwhile reduced at one of the steepest rates since the PMI series began in early 2011.

Companies were also cautious towards inventory building. The level of input stocks was broadly stagnant in October, not least thanks to reduced purchasing activity. Panellists generally mentioned having sufficient stocks to meet current demand. An area of concern is the build-up of unsold stock, which was mainly attributed to weakening demand. This portends further downward pressure on production in coming months as manufacturers seek to clear excess stocks.

Efforts to move stocks via discounting were evident in the October survey, with average selling prices reduced for a second consecutive month and at the steepest rate in the survey history.

The latest PMI data remain in dovish territory as far as signals for monetary policy are concerned, supporting Bank Indonesia's recent decision to deliver a fourth consecutive rate cut in October. Further weakness in manufacturing activity signalled by the PMI's future expectations index will add to pressure for more monetary easing, considering that the central bank has yet to fully unwind the combined 150 basis-point hike unleashed in 2018 to shore up the falling rupiah.

The government could also unveil counter-cyclical fiscal measures to counter slowing growth momentum, following comments made by Luky Alfirman, Director-General for Finance, on expectations of a wider fiscal deficit (2.0-2.2% of GDP) this year. 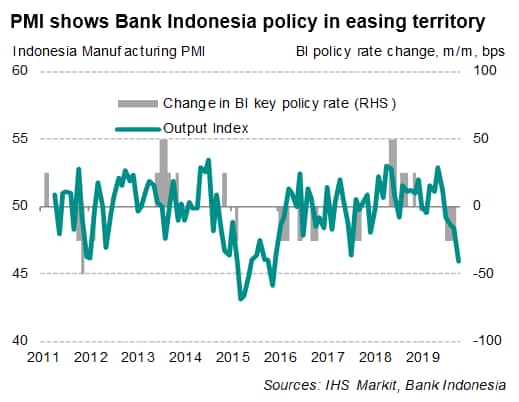