The latest PMI survey data indicated that the Indonesian manufacturing sector grew at a slower rate in October. The survey also brought signs of softening demand from not just external sources but also domestic, which bodes ill for business activity in coming months. Inflation pressures meanwhile intensified, largely driven by a weak rupiah. 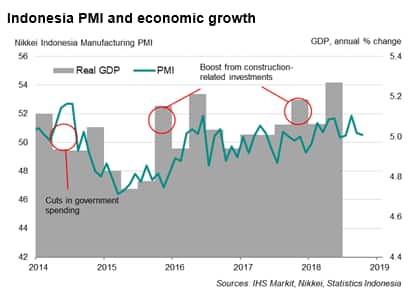 The seasonally adjusted Nikkei Indonesia Manufacturing PMI™ fell slightly to 50.5 in October, down from 50.7 in September, signalling only a very slight improvement in the health of the factory sector. The latest reading was below the average seen over the first nine months of 2018.

Factory output rose modestly, but manufacturing orders fell (albeit only marginally) for the first time since January, with new export orders declining further. 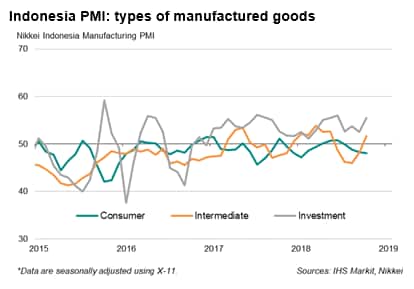 Analysis of output by types of manufactured goods indicated that a decline in the production of consumer goods was compensated by growth in output of intermediate goods (comprising supplies of inputs to other companies) and capital goods (such as plant and machinery).

However, October saw the first monthly decline in new orders since January, calling into question if Indonesia's manufacturing sector would end the year on a disappointing note. Export sales meanwhile fell further, continuing the decline for nearly a year.

Price pressures meanwhile rose to a three-year high in October. Input cost inflation surged to the highest since early 2014 (a period of dramatic rupiah depreciation after the Fed announced plans to wind down its bond purchases). The rupiah has so far weakened 12% against the US dollar since the start of the year, albeit having shown signs of stability in recent weeks. Besides a weak exchange rate, higher global commodity prices also added to manufacturers' cost burdens. 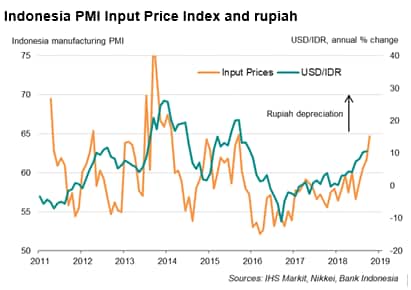 The pause in Bank Indonesia's monetary policy tightening during the October meeting is not seen as a signal that the central bank is turning away from its hawkish stance. Policymakers remain concerned that the rupiah remains vulnerable to financial market volatility ahead of a widely expected Fed hike in December and ongoing concerns about emerging markets. However, though the situation has become one of balancing risks: while the PMI price gauges largely supported the case for rate hikes, the survey also suggests that softening demand conditions may limit the extent to which the central bank can tighten policy before higher rates start to hurt business activity. 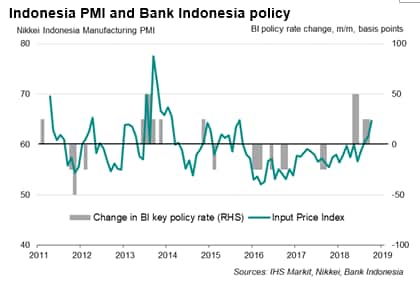