Indonesia's manufacturing sector lost some momentum in June, according to the latest PMI data, with signs of weakening growth midway through the year. However, there are signs that the slowdown could be short-lived, according to the PMI survey's sub-indices. 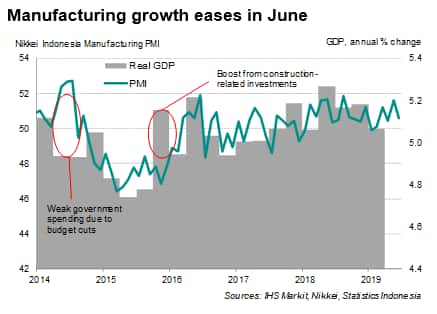 The Indonesia Manufacturing PMI™, compiled by IHS Markit, fell to 50.6 in June, down from a nine-month high of 51.6 in May, indicating only a mild improvement in manufacturing conditions. The headline PMI, a composite indicator derived from various survey sub-indices, provides a quick snapshot of the health of the manufacturing economy, though also acts as a useful indicator of growth in the overall economy.

At current levels, the PMI is indicative of GDP growing at an annual rate of approximately 5.1%, but delving into the survey reveals further signs of softening growth in the sector. Total order book growth slowed to only a marginal pace in June, largely reflecting stagnating export sales. Indonesian goods producers reacted to moderating demand by raising production at a slower rate.

Companies also exercised greater caution towards capacity investments and inventory management due to the reduced sales inflows. Producers slowed their input purchases and raised inventories only marginally, while the latest rise in factory employment was the weakest for a year. Anecdotal evidence suggested that the non-replacement of contract employees was a common reason for reduced headcounts. 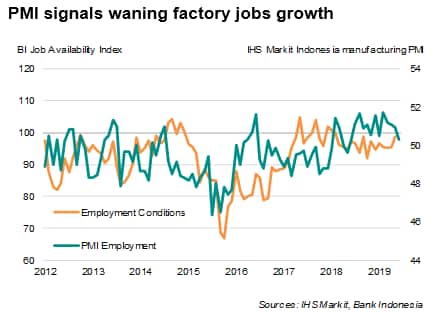 In line with the manufacturing slowdown, input costs rose at a decreased rate in June, though partly also due to a stronger exchange rate. Consequently, average selling prices for Indonesian manufactured goods showed only a mild increase. 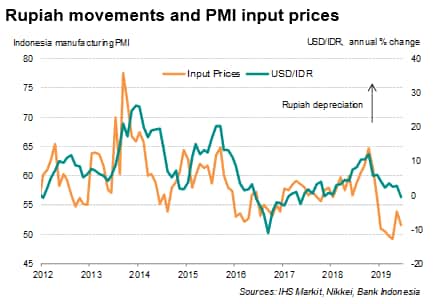 While the PMI's sub-indices highlight the risk of growth slowing further in coming months, the survey also brought some assurances that the slowdown in manufacturing activity is unlikely to accelerate dramatically. First, the level of outstanding workloads rose for a second month running in June, suggesting that firms are able to work through their backlogs to maintain current output levels in the short-term. Second, business optimism about the future has also remained buoyant. Barring a significant deterioration in demand conditions, the Indonesian manufacturing industry should expect fairly steady growth ahead.

For more information about the PMI surveys and the IHS Markit PMI for Indonesia, please contact economics@ihsmarkit.com.