Indonesia’s manufacturing economy picked up pace at the beginning of the second quarter, building on the positive start to the year. However, the stronger upturn was not accompanied by further job creation, and optimism about the outlook continued to slip.

The Nikkei Indonesia PMI™ rose from 50.7 in March to 51.6 in April, signalling a third consecutive monthly improvement in the health of the manufacturing sector. The latest reading was the highest since June 2016.

Following a positive start to the year, April data suggest the second quarter could be even stronger than the first quarter. The current data are broadly consistent with annual GDP growth of just above 5%. 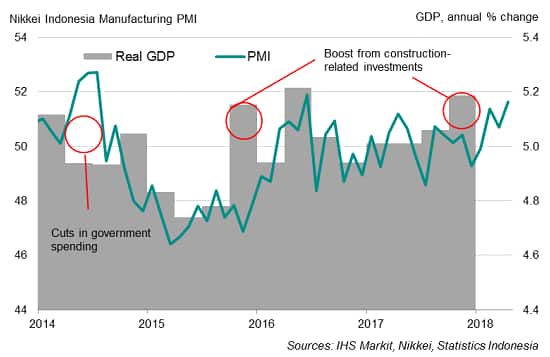 Production growth accelerated to show the largest increase in output for over three-and-a-half years amid signs of strengthening demand for Indonesian manufactured goods. Order book growth picked up, rising by the greatest extent for nearly two years. Manufacturers also scaled up purchasing activity to build-up their inventories of inputs.

However, the overall picture is not all rosy. Other survey indicators flagged concerns about future growth. April’s survey data showed stagnant employment despite greater demand. In part, a persistent lack of capacity pressure within the manufacturing sector meant that firms were able to tap existing labour resources to meet higher production requirements.

Another area of concern is falling export sales. New export orders declined for a fifth straight month in April, with the rate of contraction the steepest for over a year.

Manufacturers were also less optimistic regarding the 12-month outlook for output. The PMI’s gauge of future expectations fell to the lowest for over five years. 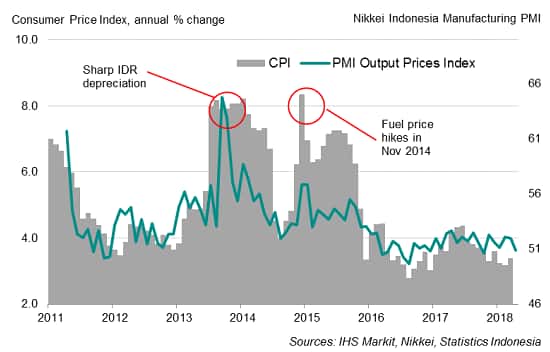 Indonesian manufacturers continued to face strong cost pressures, primarily because of a weak exchange rate. The Indonesian rupiah has depreciated 1.7% against the dollar since the end of 2017, which has led to higher prices for imports. While April saw a dip in the growth of input costs, the rate of inflation remained elevated. Subsequently, factories raised their selling prices again, albeit at the weakest pace for six months. 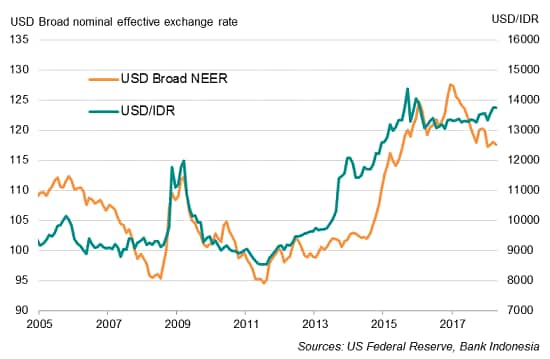 The recent central bank intervention to stabilise the rupiah has raised expectations that Bank Indonesia may consider hiking its policy rate to maintain currency stability. The rising interest rate differential between the US and Indonesia also added to the pressure.

Central bank rhetoric at its recent monetary policy meeting also took on a hawkish tone, with Governor Martowardojo highlighting a number of global developments that could trigger capital outflows from Indonesia’s bond and stock markets. The current policy rate is 4.25%. 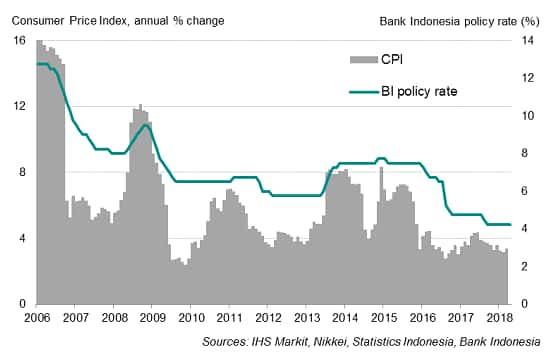