Several thousand workers on 20 January 2020 protested outside parliament in Jakarta against the government's proposed "omnibus" Job Creation bill that consolidates and liberalises Indonesia's labour regulations. Similar protests took place in other major Indonesian cities such as Medan and Surabaya.

The protests were organised by a number of unions including the Indonesia Workers' Union Confederation (Konfederasi Serikat Pekerja Indonesia: KSPI), the country's biggest and most militant labour confederation. Parliament typically takes around two years to pass a bill, but President Joko "Jokowi" Widodo intends to pass the Job Creation bill, which he regards as an important part of a broader policy to attract greater foreign direct investment, within 100 days after its submission to parliament.

Unions have not been involved in formulating the bill, and no official draft has been made available publicly. However, statements from President Jokowi indicate that the government intends to revise the formula to calculate the annual minimum wage and the regulation around hiring and firing to make it less costly for companies. 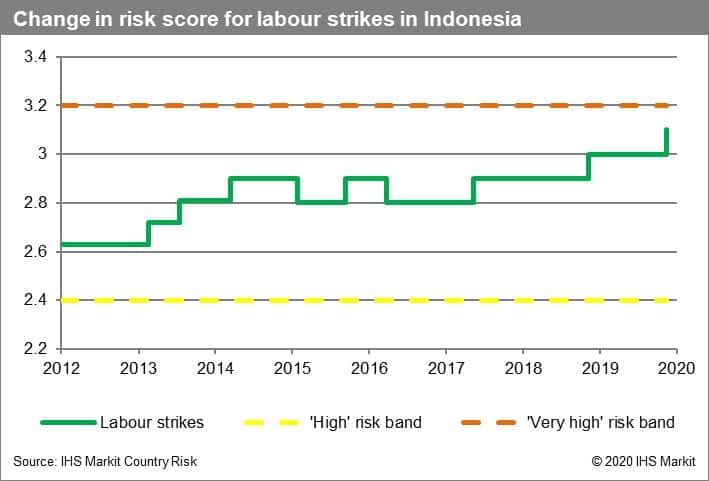 The KSPI and other unions are likely to stage large-scale protests periodically to coincide with the different stages of the parliamentary debate. Despite the government's 74% parliamentary majority, procedural issues mean that the bill is likely to be passed at the end of the year at the earliest. Protests are likely to focus initially on parliament and regional assembly buildings. Labour protests are usually peaceful, but there is a high likelihood of fighting if demonstrators attempt to forcibly enter government buildings, with the police using water cannons, tear gas, and rubber bullets to disperse protesters.

However, government refusal to meet unions' demands will increase the likelihood of protests expanding into major industrial zones and evolving into strikes, particularly in the greater Jakarta area, where the KSPI can mobilise hundreds of thousands of workers. Such strikes typically last no more than 48 hours and would probably involve blockades near manufacturing companies in industrial parks. However, precedent suggests that major property damage is unlikely.

Comments by ministers that the government would welcome inputs by major unions into the draft bill would indicate the government's willingness to compromise and thereby reduce the risk of further protests.

Anton Alifandi, an analyst with our county risk team at IHS markit discusses this topic in more detail. Listen to Podcast