The Ujwal Discom Assurance Yojana (UDAY) scheme, announced in November 2015, targeting financial turnaround of the debt-ridden state-owned distribution companies (DISCOMs), completed its term in March 2019. The intent of the reform was to reduce the existing debt burden of the DISCOMs and bring operational and financial discipline, which would have helped DISCOMs to achieve breakeven within a three-year period. Although DISCOMs enjoyed the benefit of debt reduction during the period, the sector continues to face structural issues impacting the wellbeing of DISCOMs.

At the end of the scheme, state-level achievements remained fragmented with respect to operational parameters and no substantial financial turnaround was observed. The fiscal condition of the states and their growing outstanding liabilities raise concern about the future availability of such bailout packages to DISCOMs, and these concerns will remain unless stricter actions are taken to improve their operations and address the fundamental issues.

The precarious financial health of DISCOMs poses a significant risk to demand growth and new investments. IHS Markit assessed the state-level success of the reform with respect to monitored financial and operational parameters; further ranking the performance of states based on their target achievements. 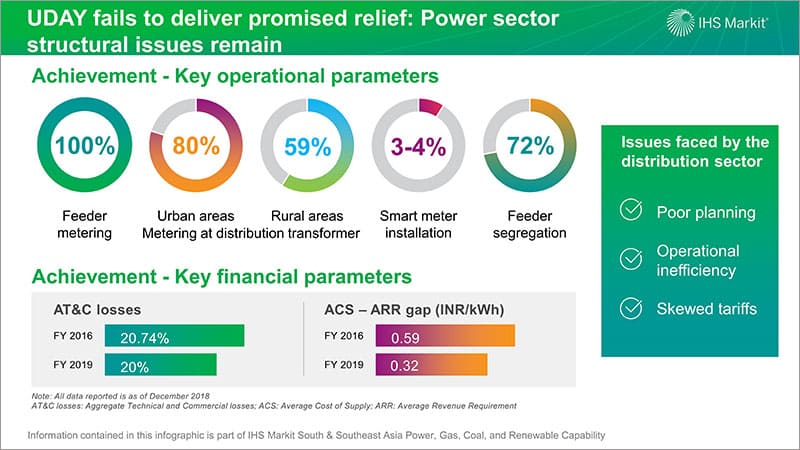 The current financial stress in the distribution and thereby generation segment is not likely to fade away early, and it is expected to constrain market growth until meaningful reforms are initiated. The key for early recovery remains the timely implementation of these reforms and strong adherence by market participants. Until that happens, India's power sector will continue to face the structural challenges and players along the value chain are unlikely to be given relief.

Learn more about our coverage of the Indian natural gas market through our South Asia Power, Gas, Coal, and Renewables service.

Deeksha Wason is the Senior Analyst with expertise in South Asia power market at IHS Markit and is based out of Gurgaon, India office.