Total crude oil discharged so far in April has averaged 4.87 million b/d, according to preliminary data from IHS Markit Commodities at Sea. This compares with 4.69 million b/d in March and 4.32 million b/d in February. Taking account crude currently in transit, arrivals into India in April are expected to average 4.73 million b/d, which would be a 24% increase year-on-year.

Data shows that imports from Iraq will likely total 1.34 million b/d in April, the highest level since data started being recorded in October 2016. Imports from Saudi Arabia, the UAE and Kuwait are also set to surpass volumes seen in March.

India heavily relies on imports of energy commodities with its crude import dependency at 86% in March, up from 83% a year earlier and it remains to be seen if the new wave of coronavirus cases will impact crude buying significantly.

India's new Covid-19 cases on April 20 were reported at over 295,000, bringing the total active cases to more than two million, according to the health ministry. There were 2,023 deaths, bringing the tally to 182,553.

Domestic fuel demand in the short-term is expected to contract as people avoid travel and stay home due to curfews and closures of shops, malls and markets. Prime Minister Narendra Modi on April 20 however urged states to use lockdowns only as the last resort in dealing with the rising cases - focusing instead on micro containment zones - in a bid to protect the economy.

In the last few weeks, Indian refiners have remained active in the market. Indian Oil Corp, the largest state-owned refiner with nearly 1.6 million b/d of capacity, bought five million barrels of June-loading West African crude via tender. Earlier it had bought eight million barrels of WAF grades for June-July delivery. The crudes included Bonny Light, Akpo and Forcados from Nigeria as well as Oguendjo from Gabon.

India's refinery runs slipped 1% on year in March to 4.96 million b/d - marginally up from February, according to PPAC. IOC has said it is currently operating at near full capacity and will maintain throughput rates at its refineries across the country. Additionally, there are so far no signs that private refiners Reliance and Nayara Energy have adjusted their operations.

Smaller state-owned refiners with more regional coverage however are likely cutting runs as more areas face restrictions. India's oil products demand contracted in 2020, but refinery runs were largely maintained, as they put products into storage or kept exports high. Companies will need to adjust operations if the situation does not improve by the end of April. 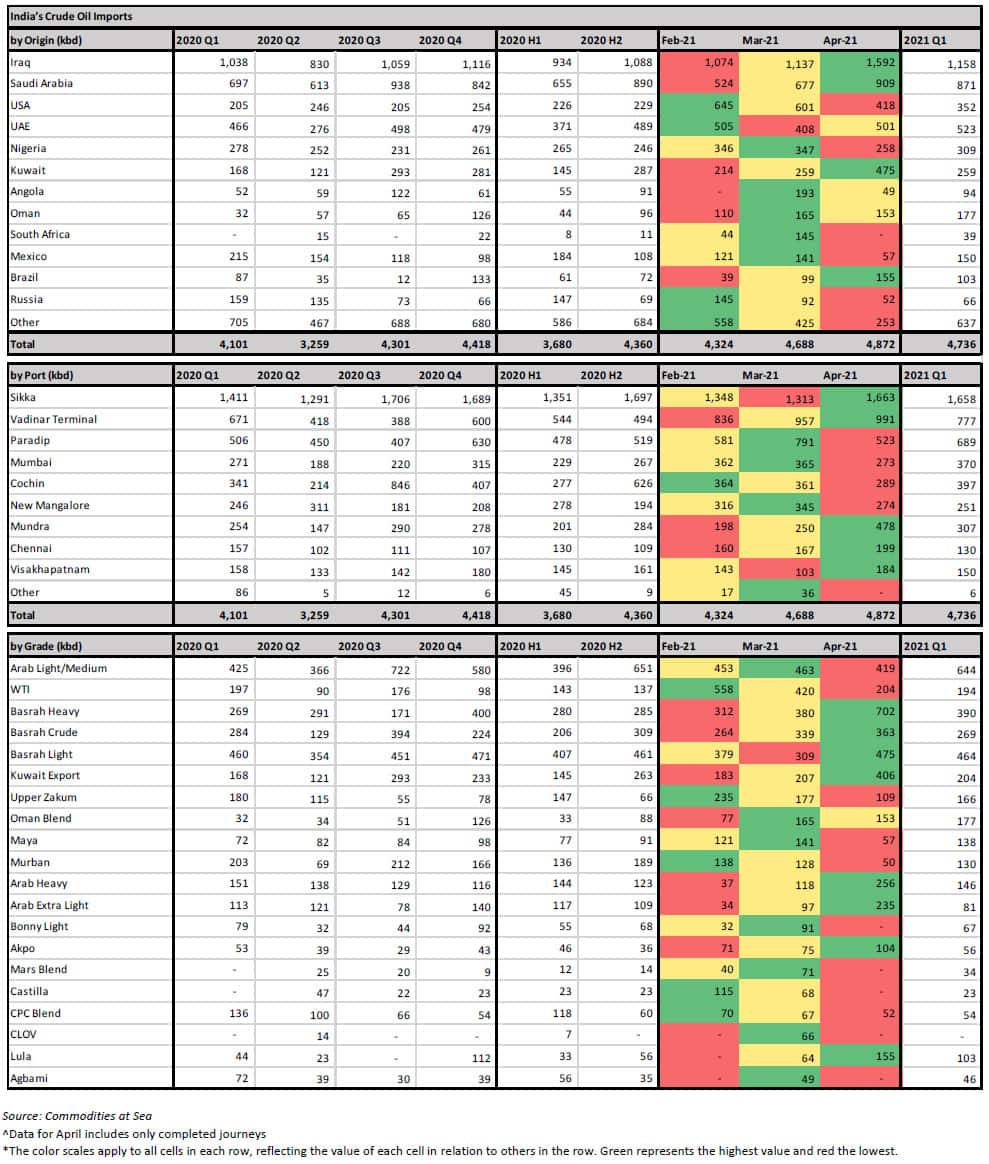