With the reappointment of the previous government during 2019 general elections, the target of a 15% gas share in the energy mix remains a top priority. Government-identified midstream infrastructure, which is transmission and distribution, continues to be a major hurdle in unlocking India's gas demand potential. In the last couple of years, there has been lot of impetus on downstream gas business development—specifically to expand gas demand across domestic households, commercial, industrial, and transport sectors covered under the city gas distribution (CGD) sector.

The CGD sector's share of gas demand reached 16.5% in 2018. Since 2011, the sector has grown by a 7.1% compound annual growth rate (CAGR). While CGD for transport and households has priority for domestic gas allocation, LNG is still heavily used and accounts for approximately 44% of total gas supply to the sector in 2018. LNG has been, and will continue to be, competitive in the CGD segment as it is often cheaper than alternative fuels such as diesel and gasoline.

In 2018, the Petroleum and Natural Gas Regulatory Board (PNGRB) launched its 9th bidding round for the development of further city gas networks across India. This round included 80 geographical areas (GAs) awarded to 19 commercial entities. In addition, during the first quarter of 2019, PNGRB concluded the 10th bidding round and awarded an additional 50 GAs across the country.

IHS Markit expects that long-distance pipeline construction will further enhance the scope of city gas developments, as more areas would get connected to gas supply. The recently authorized GAs will take a minimum of five years to become fully operational; till then, the CGD network would witness a ramp-up of natural gas demand. We expect that the CGD sector will continue to grow at a CAGR of 8.6% and its share in the gas demand is projected to reach 20% by 2025. 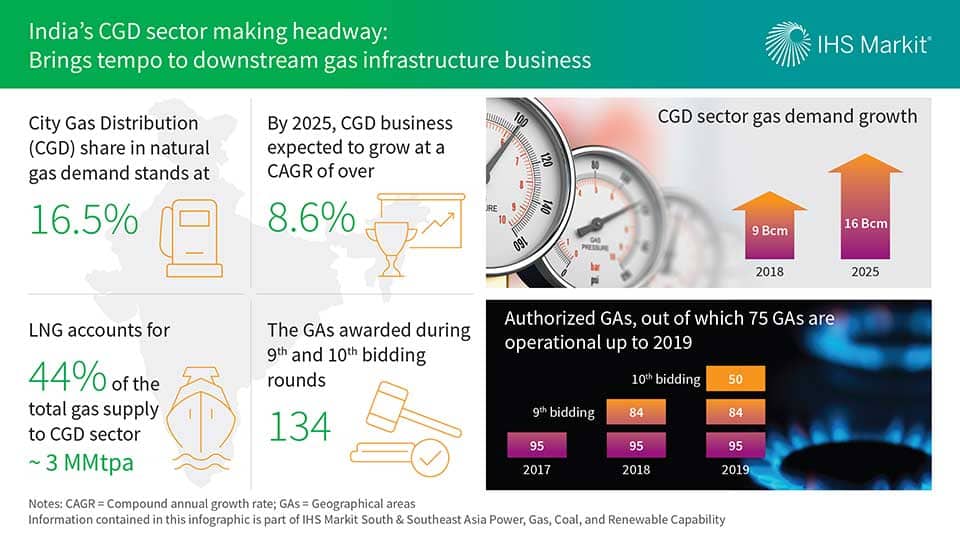 Learn more about our coverage of the Indian natural gas market through our South Asia Power, Gas, Coal, and Renewables service.

Vidur Singhal is the Senior Analyst with expertise in South Asian natural gas and LNG at IHS Markit and is based out of Gurgaon, India office.