The Indian Government has closed its third bidding round under the Discovered Small Fields Policy (DSF-III) on 31 May 2022. Submissions of bids were ongoing on the DSF e-bidding portal since 20 April 2022. The Directorate General of Hydrocarbons (DGH), the upstream regulatory arm of the Indian Government, launched DSF-III on 10 June 2021 and had extended the DSF-III timelines on several occasions.

DSF-III had offered 32 contract areas, comprising 75 fields/discoveries, with a combined total area of more than 13,000 sq km, in nine sedimentary basins. The fields which were on offer include a few of the nomination fields of National Oil Company, Oil and Natural Gas Corporation Limited, and some of the relinquished/unmonetised discoveries. This was an exciting round with much potential on offer as the 32 offered contract areas have a total resource potential of around 230 million tonnes of oil equivalent (MMtoe) / 1.7 Bboe. The following is a commercial analysis overview on the seven key contract areas which were offered under DSF-III.

The downloadable map (Figure 1) below illustrates the location of the DSF-III contract areas, in relation to India's oil and gas basins by the percentage of total production in 2021. The graph (Figure 2) summarises the contract areas which were offered in each basin. For more details on the DSF-III bidding round , please refer to DGH / IHS Markit GEPS 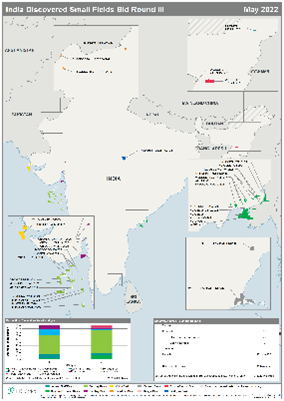 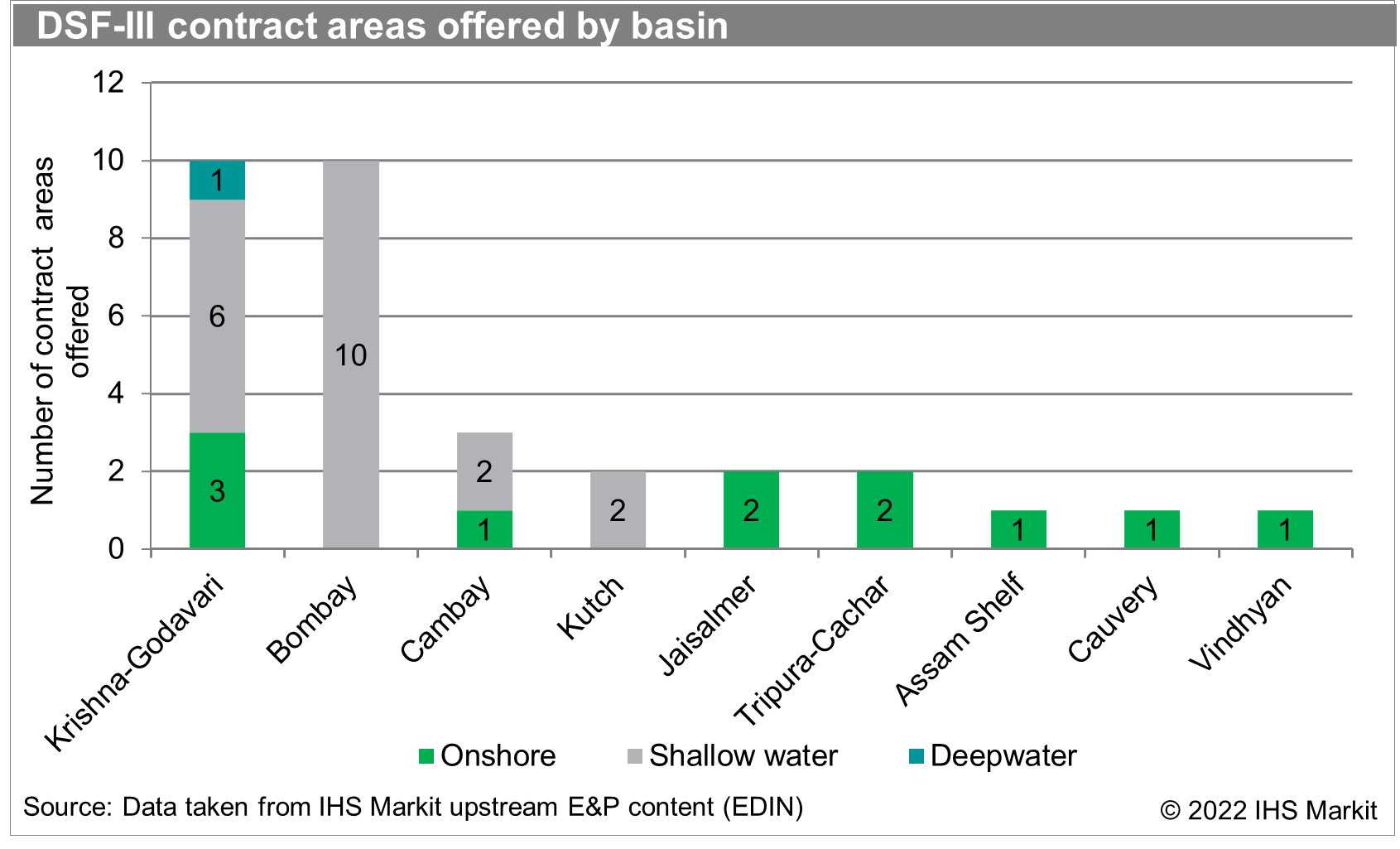 Figure 2: Overview of contract areas by basin, as offered in India's DSF-III bid round

Table 1: Overview of seven key contract areas offered under the DSF-III bid round

Based on the Discounted Cash Flow (DCF) model, valuations of the seven contract areas have been derived. DCF analysis has been performed on these key contract areas to determine the indicative economic parameters for efficiency. Figure 3 illustrates the DCF model and figure 4 represents the efficiency of seven key contact areas. 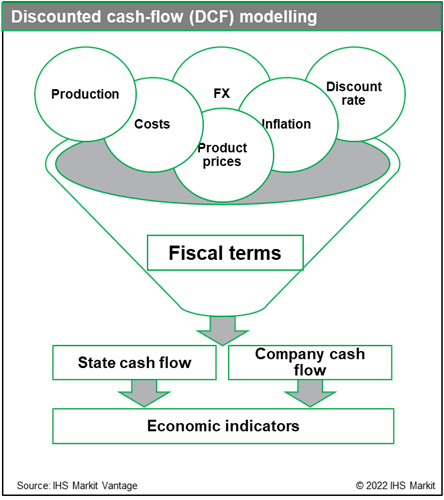 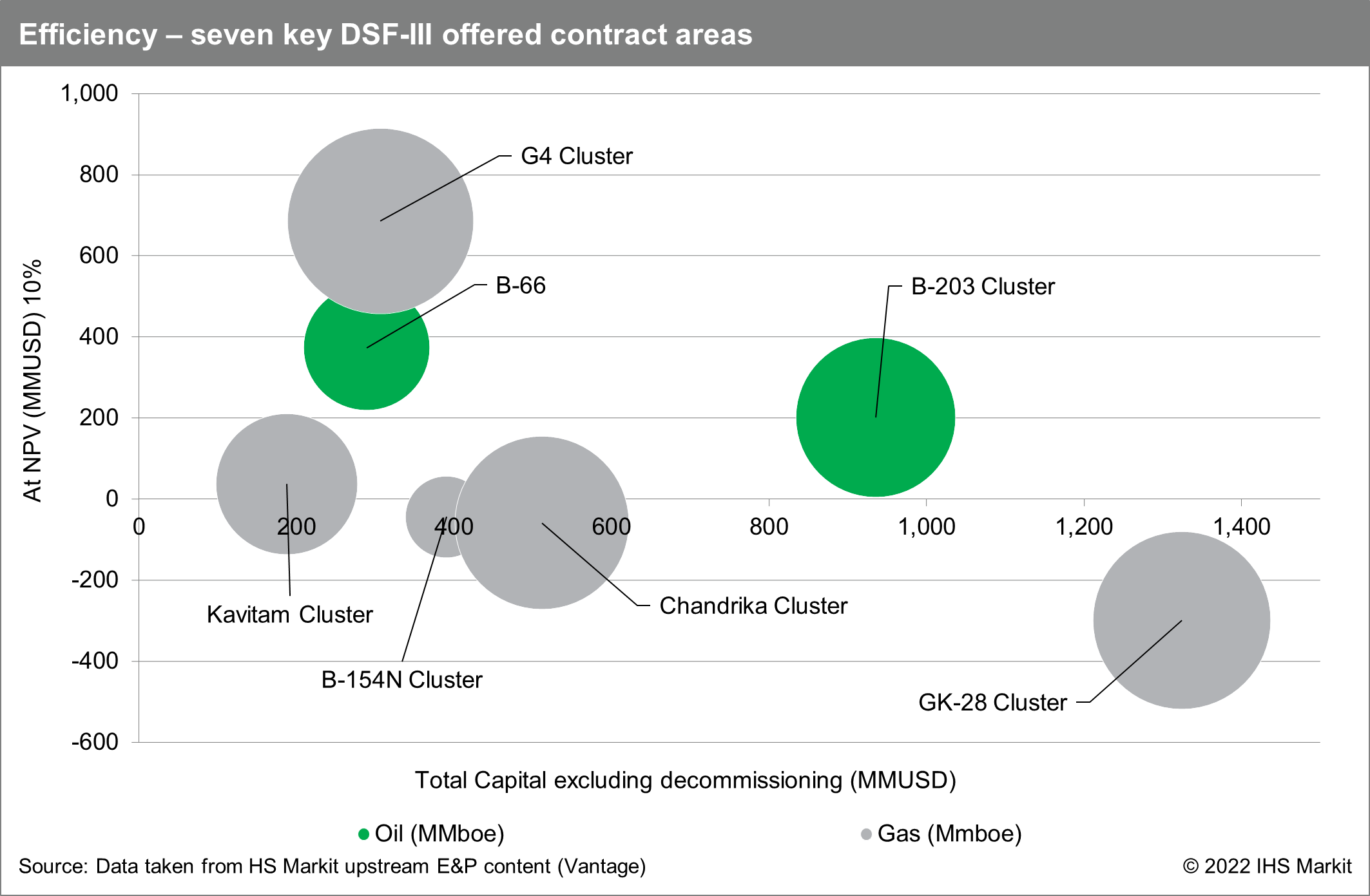 Note: The valuations are in nominal USD, with a 10% discount rate, and are provided as of 1 January 2022. For the product prices, the Indian Government's Administered Pricing Mechanism is used as a basis for gas price in real terms with the oil price at $95/bbl. The forward-looking price is kept constant in real terms.

The Indian Government announced the DSF Policy in 2015 to bring marginal fields / unmonetised discoveries / relinquished discoveries into production on a priority basis. The DSF policy is a significant aspect of India's broader energy strategy of becoming a gas-based economy by 2030 and achieving energy independence by 2047 under the Government's "Atmanirbhar Bharat" campaign as part of India's energy map.

Further information on upstream E&P activity and opportunities in India and worldwide is available via our Upstream Intelligence solutions.