India expected to fall short of its short-term renewable target

Three years ago, India's government announced a 175 GW national renewable target to be achieved by 2022. This target reflected a strong commitment from the Indian government toward renewable energy and resulted in an increase in the annual renewable additions from under 6 GW in 2015 to 13 GW in 2017. In June 2018, India's Ministry of New and Renewable Energy announced the achievement of 70 GW of cumulative renewable capacity in the country, including 34 GW of onshore wind and 22 GW of solar photovoltaics (PV).

Driven by the targets and the significant cost reductions for solar and wind achieved through competitive auctions, India has witnessed a boom in renewable installations. However, India's renewable target remains largely aspirational: the country would need to double the 2017 record additions during each of the next five years to achieve the ambitious target.

In addition to the national renewable target, India announced a relatively conservative intended nationally determined contribution (INDC) target as part of the 2016 Paris Agreement. The INDC target requires India to reach 40% of its installed capacity from non-fossil fuel sources by 2030, or roughly 8 GW of annual renewable additions. This moderate international target suggests the government's acknowledgment of the various challenges that the deployment of renewables in the country will face, including land availability, regulatory reforms, and grid and storage infrastructure required for large-scale integration of renewables. 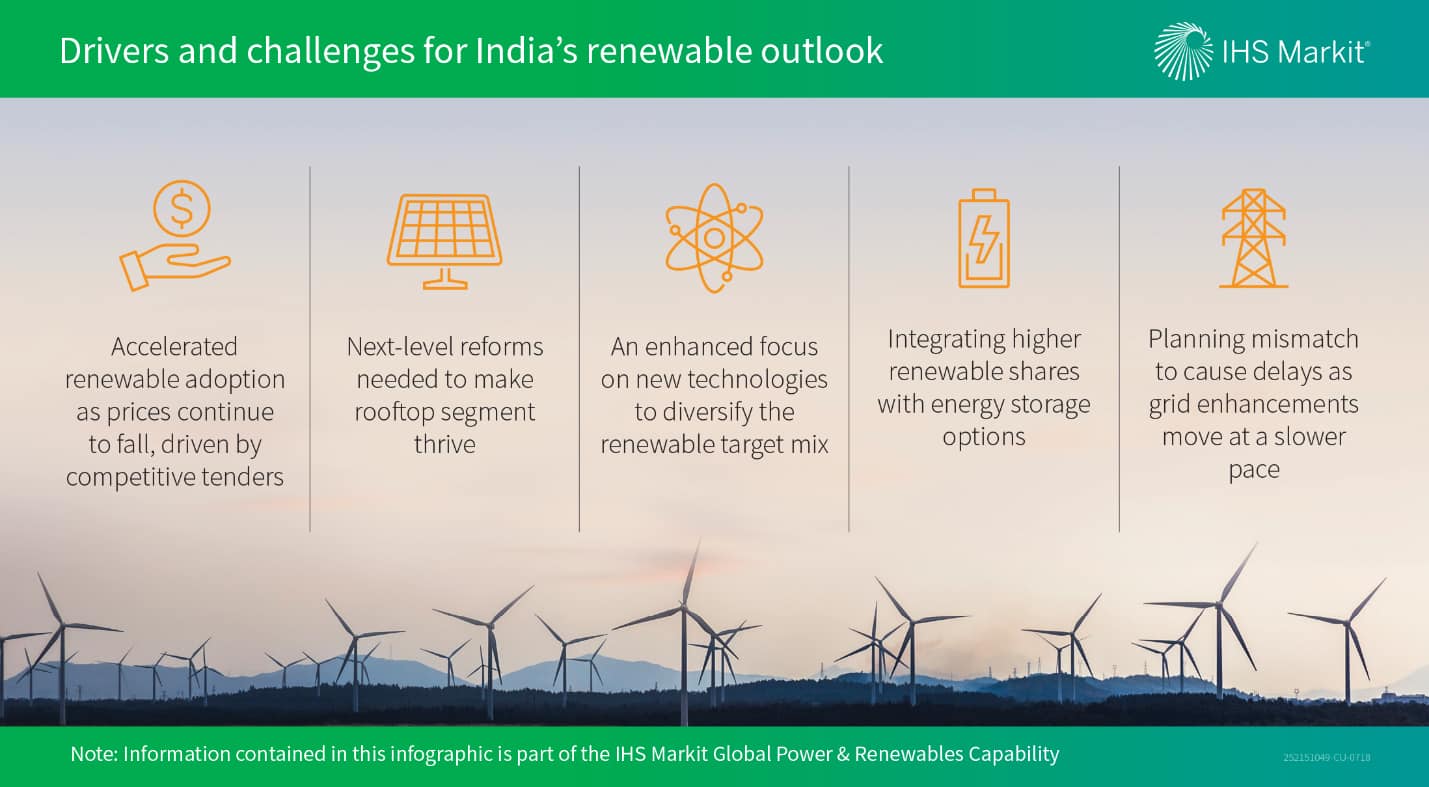 In the midterm, IHS Markit expects India's average annual renewable additions to reach 15 GW in the next five years. This would result in the country falling short of the national target by 20% but significantly exceeding its INDC commitment. Most of this shortfall would be attributable to a substantial underachievement of the unrealistic rooftop solar PV target and a minor shortfall in utility-scale solar PV targets. Nonetheless, the renewable sector in India is slated for strong growth, especially for utility-scale solar PV and onshore wind.

During the long term, IHS Markit foresees India's renewable sector growing at a 6-7% annual rate during 2018-50. This growth will be driven by sustained cost reductions, effective deployment of rooftop solar, technology diversification, and renewable integration and system stability. However, the future growth of renewables in India will hinge on the country's ability to maintain focus on green growth by timely resolving administrative, institutional, and infrastructure barriers through reliable contracts, distribution sector reforms, and grid strengthening.

Learn more about our coverage of the India power and renewables market.