In the wake of the political earthquake created by Brexit, the European Commission (EC) must be eagerly awaiting the formation of the next Spanish government after fresh elections on 26 June and months of uncertainty. The EC gathered in May to decide on next steps to resolve the Iberian Peninsula's deficit situation. It decided to delay until July the decision to issue Spain and Portugal a fine for not fulfilling their 2015 deficit targets as it was not the right time economically or politically. This was also driven by not wanting to influence the general elections in Spain, included in the corrective arm of the EC's Stability and Growth Pact since April 2009.

The EC did take the opportunity in May to urge deeper Spanish reforms in the coming years to attain deficit objectives, having granted the country until 2017 to reduce its deficit to below 3%. Most of the EC's criticism was directed towards limited action at the central or autonomous community (CCAA) government level in controlling hospital drug spending. The EC highlighted that even excluding hepatitis C drugs (funded since 2015), overall hospital medicine expenditure witnessed strong growth in 2015, based on data from the Spanish branded industry association Farmaindustria.

The latest cumulative data from the Spanish Ministry of Finance up to March 2016 (see Figure 1) show hospital drug expenditure was highest in Cataluña, Andalucía, Madrid and Valencia, independent of the inclusion of the hepatitis C drugs. Respective year-on-year percentage changes in expenditure show that amongst these CCAAs, only Madrid and Valencia increased spending. 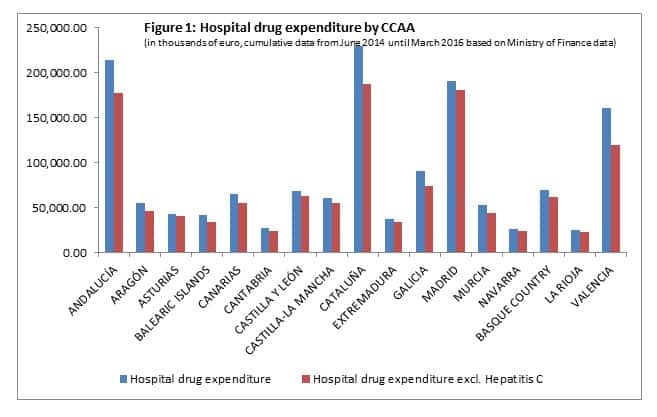 At the crux of the matter is that hospital drug spending plays a key part in the fact that CCAAs, the real budget holders in Spain, are not sticking to initial overall health budgets that have in fact increased or stayed flat in 2016 compared to last year (see Figure 2). The Spanish Reform Plan for 2016 included the creation of a mechanism to limit growth in health and pharmaceutical spending, which was intended to be adopted by the CCAAs in a voluntary fashion to stimulate cost-containment. But the EC was sceptical in May about the success of this mechanism due to unawareness of how many CCAAs had adhered to it.

On a positive note, according to Farmaindustria, 2015 is likely to have ended with the lowest levels of debt observed in the Spanish public hospital drug market since 2006, although this information needed final confirmation when unveiled in February 2016.This debt payment was achieved via central governmental financing mechanisms set for CCAAs. Clearance of arrears is an issue also affecting the neighbouring Portuguese public hospital market, with the EC identifying in May that underbudgeting due to lack of accurate planning is a major short-term challenge. This is a problem that has historically plagued the hospital arena in the Iberian Peninsula.

The latest general election results confirmed the conservative People's Party (PP) victory but fell short of an overall majority. Compared to December 2015, the left-leaning Socialist Workers' Party (PSOE) came second and obtained worse results, while the third-place republican left-wing United We Can Party (Unidos-Podemos) had a similar outcome and the centrist Citizens (Ciudadanos) suffered the most and came fourth. Only a hypothetical PP-PSOE pact would secure an absolute majority. A quick look at the campaign pledges shows that all believe in financing system reform, with implications for the disparity currently observed in CCAA healthcare budgets per capita (see Figure 3): 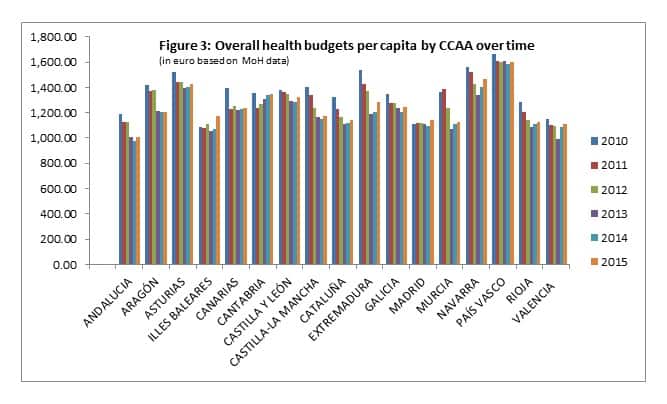 Once more, the Spanish health sector is awaiting the formation of a coalition government that will help navigate a complex multi-party regional political landscape. Although a renewed deadlock is likely, the new government will have to make significant health budget adjustments in order to meet EC deficit objectives, as outlined in our report on comparative healthcare financing trends in Europe. The November 2015 protocol between the Ministries of Finance and Health with Farmaindustria should in theory help limit expenditure growth in 2016 on branded prescription drugs to the reference GDP growth rate. The Ministry of Finance reported in June that the vast majority of CCAAs have already conformed to pharmaceutical spending related measures linked to this protocol, however the success of its implementation will hinge on how the national political landscape evolves.