In the race to diversify and decarbonize, most NOCs remain on the starting blocks

During the last half-decade, global integrated oil companies (IOCs) have made a series of strategic announcements to reduce their carbon footprint in line with the energy transition. Reducing greenhouse gas emissions and investing in low-carbon activities are all part of the IOC toolkit as these traditional oil and gas producers—to differing degrees—attempt to reposition themselves with an eye toward a more sustainable, less carbon-intensive future.

National oil companies (NOCs) are also making strides toward the diversification and decarbonization of their operations. However, the transition for these companies is expected to transpire at a much slower pace. Within the NOC universe, IHS Markit has identified three groupings as it pertains to the energy transition: the convinced, the committed, and the concerned.

As social and environmental concerns about climate change continue to grow, pressure is building on NOCs to diversify their activities in the energy space and decarbonize their existing oil and gas operations. To measure the progress that NOCs have made in their diversification and decarbonization efforts, IHS Markit has developed several new metrics to quantify these actions, enabling us to compare and contrast 25 of the largest NOCs worldwide. 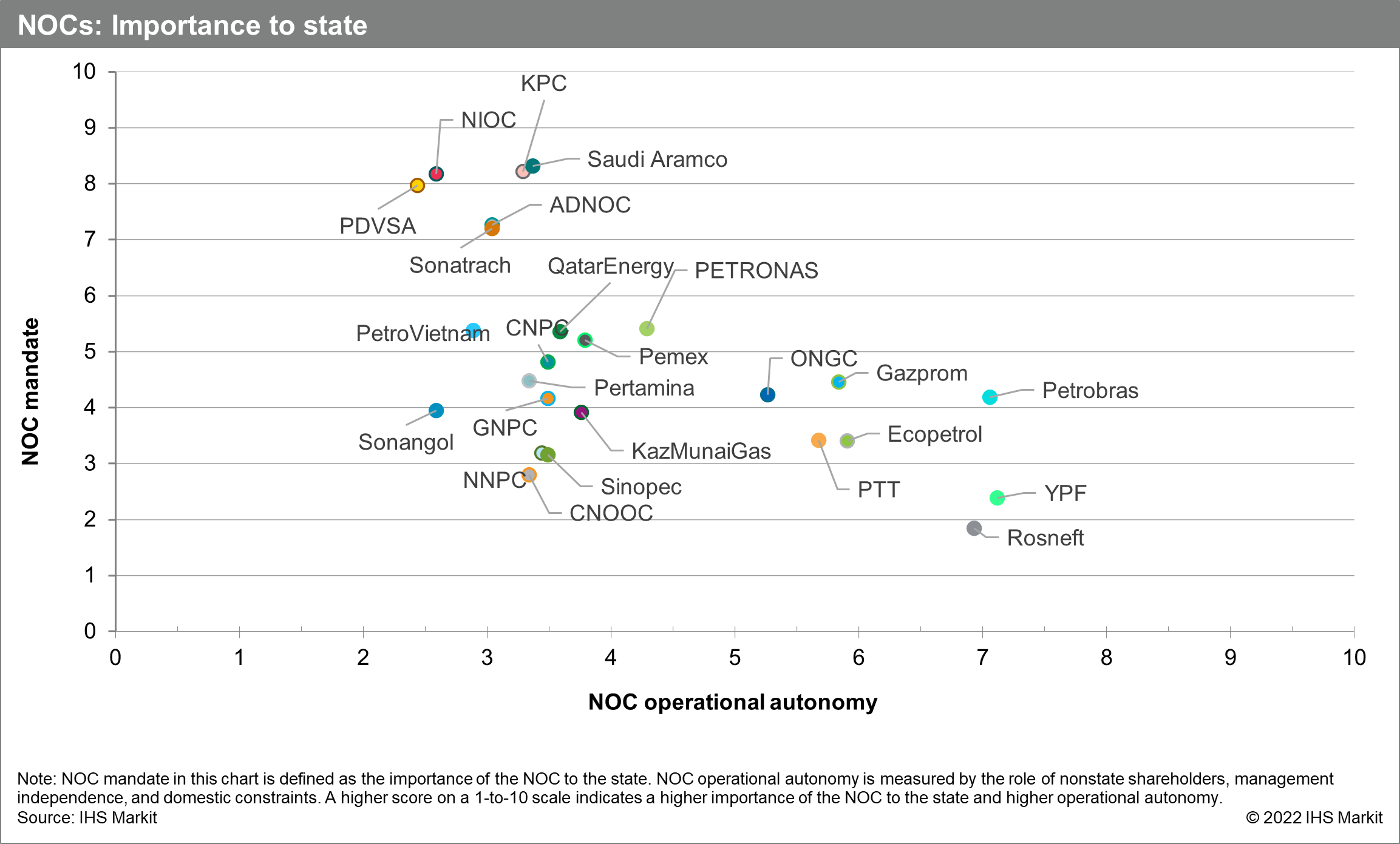 Diversify, decarbonize, and galvanize: the race is on but NOCs have just begun

Whether they are convinced, committed, or concerned, NOCs are being forced to adapt to the emerging energy transition. In the oil and gas sector, global IOCs are at the vanguard of the race to invest in low-carbon initiatives and decarbonization. On the other hand, most NOCs have not only just begun the race, and the problem is that most are still walking, not yet running. Nevertheless, NOCs have recognized the need to address climate change, reduce their carbon footprint, and diversify their operations. Looking at our metrics for operational diversification and decarbonization in a chart (see below), it is apparent that some NOCs are making more progress than others. Those companies in the upper right are further along in their efforts, with a greater commitment to decarbonize and diversify their portfolios, while those in the lower left have made fewer steps in this direction. As we can see, most NOCs are only now elaborating their strategies with respect to diversification and decarbonization. This could be attributed to two main reasons:

The big decarbonization and diversification question for NOCs is the source of pressure to change. Will the markets force them to pivot toward a national energy company? Or will it be the host government demanding the acceleration of the company's decarbonization efforts? At this stage of the energy transition race, most NOCs have begun responding to emerging pressures but very few are driving activity at scale that will help diversify, decarbonize, and transform them into national energy companies. 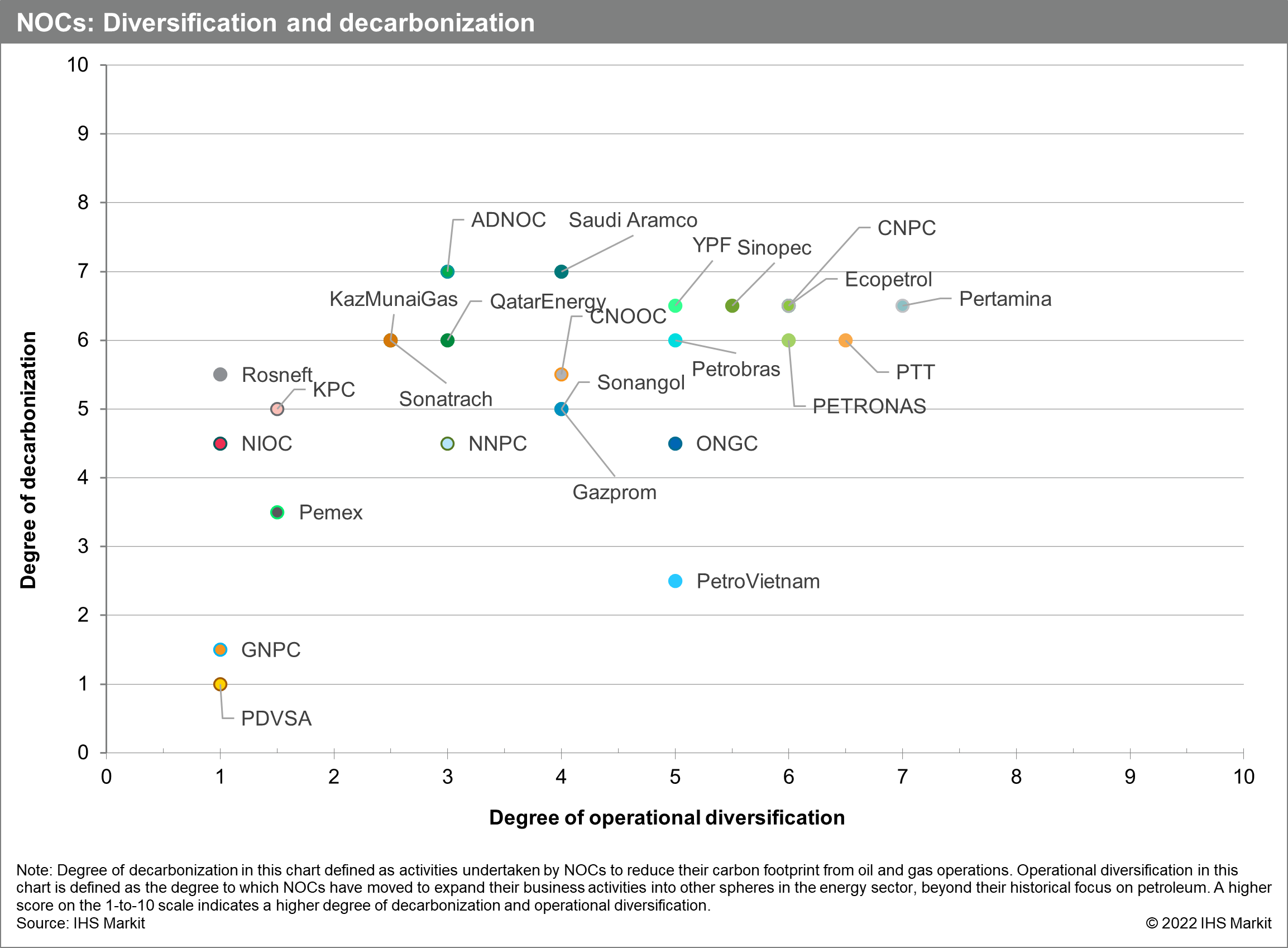 Material for this post is taken from the full report, entitled "NOC Insights—In the race to diversify and decarbonize, most NOCs remain on the starting blocks".

For an in-depth assessment of financial and operational capabilities across the 25 NOCs in our coverage, see the IHS Markit NOC Benchmarking Tool.

For an in-depth operational assessment of reserves, exploration, and strategic partners across the 25 NOCs in our coverage, see the IHS Markit NOC Operations Dashboard.