The FIAT 500 has come in for some criticism because dealers delivered only 17,945* units in 2011, far short of the annual goal of 50,000 announced earlier in the year by Chrysler and FIAT Chairman Sergio Marchionne. The 500's shortfall was exceptionally visible because it occurred amidst successful performances in 2011 by all other Chrysler Corporation makes. And, if one looks at the 500 in the context of the non-luxury subcompact car segment in which it competes, its results - 4% of the segment - are disappointing. (This share is for the March-December 2011 time period because the 500 was introduced in March.) 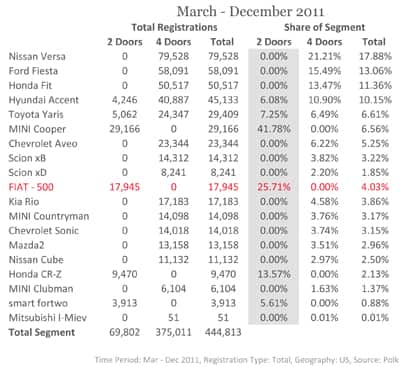 However, this is not really comparing apples to apples, since the 500 is only available as a two-door car and most other subcompacts have four doors. The 500's share of the two-door part of the subcompact segment is a much more respectable 25.7%, second in the segment after the MINI Cooper and ahead of the Accent and Yaris. It's fair to say that if every Chrysler Corporation model captured 27% of the segment in which it competed, there would be few complaints.

Nevertheless, the two-door portion of the subcompact segment is just 16% of the entire segment, so currently the 500 is getting a large piece of a small pie. During the second quarter of 2013 (estimated), FIAT will bring a four-door 500 to the U.S. market, and that will greatly increase the potential for this car. If the 500 can garner 27% of the entire segment, its annual volume (assuming the segment remains the same size) would climb to a much more respectable 120,100 units.

Get started
Fuel for Thought

Brazil’s electric vehicle (EV) charging infrastructure is being boosted with 30 different proposals from the Effici… https://t.co/kzDddOwfh3

CERAWeek Video of the Week Bill Ford shares insights and perspectives on the rapidly changing world of mobility.… https://t.co/2Y23BNU8kj

As US light vehicles sales topped 17 million in 2019 for the 5th consecutive year, Chris Hopson takes a look at the… https://t.co/YWcwD6o06a

Join us at #CERAWeek 2020 for a discussion on mobility-as-a-service and smart cities. https://t.co/1PqcgDhZ4V https://t.co/DaBBDhjK08