Impact of the Beirut explosion stretches far beyond the Lebanese capital

The latest release of the BLOM Lebanon PMI® pointed to a substantial contraction in output across the private sector midway through the third quarter. The deterioration followed the tragic explosion at the Port of Beirut on 4th August and came at a time when the country was already grappling with a severe liquidity crisis and the economic fallout from the coronavirus disease 2019 (COVID-19) pandemic. Although softer than at the height of the COVID-19 crisis, the rate of decline in activity accelerated to the fastest for three months, reversing the trend towards stabilisation seen in May, June and July.

However, it should be noted that even the steep downturn signalled likely understates the disruption caused by the explosion, as the response rate for the survey was lower than usual during August, with some businesses temporarily closed due to damage caused by the explosion. The latest results therefore do not include responses from many of those firms worst affected by the tragedy. 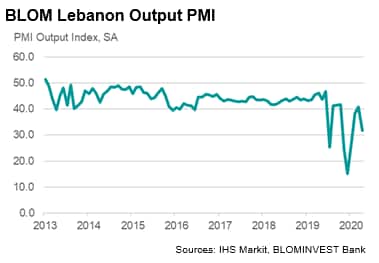 Impact spreads beyond the capital

To examine the wider impact of the Beirut explosion, we can compare PMI results from panellists operating both inside and outside the capital. Anecdotal evidence from the latest survey suggested that many businesses within Beirut faced disruption related to the explosion. Consequently, output at private sector firms within the city fell sharply, with the rate of contraction accelerating to the quickest since April, when activity was heavily restricted by measures designed to stem the spread of COVID-19.

However, PMI data also indicated a quicker rate of decline in output across other Lebanese regions during August. Combined data for all Lebanese regions excluding Beirut pointed to the sharpest contraction in business activity outside the capital since May. 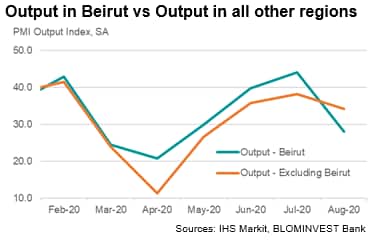 The trend in output was mirrored by new orders, with demand conditions deteriorating at a sharper pace both inside and outside Beirut. This suggests that damage from the explosion and the resulting business closures supressed demand throughout Lebanon, coherent with the integral role that the capital plays in the wider economy. 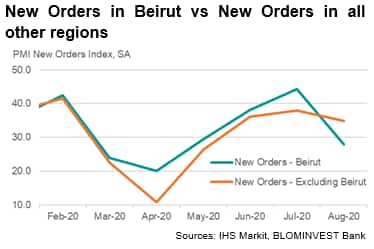 The widespread effect of the port explosion can also be seen clearly when looking at PMI export data for August. New orders from abroad fell at the quickest pace for three months and sharply overall. Although slightly faster within the capital city, rates of decline both inside and outside Beirut accelerated drastically from July. A possible explanation is that private sector firms were unable to fulfil orders amid reduced capacity at the country's largest port. 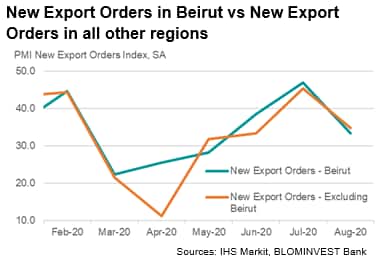 The damage inflicted on one of Lebanon's main locations for imports has driven fears over food security and rising prices. However, the latest PMI data showed little sign of any such problems. In fact, input prices increased at the softest rate for ten months, with no panellists mentioning higher food costs. Moreover, the slowdown in input price inflation was broad-based at the region level. 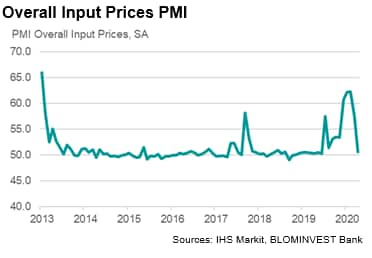 The conclusions drawn for these results should, however, be taken with some caution. Increased food prices may take time to filter through into business costs due to pre-arranged prices for inputs. The effects of any shortages on input prices will likely be captured by PMI data in the months ahead.

The BLOM Lebanon PMI® for September is scheduled for release on 5th October 2020.