The impact of region on FVA submissions

Funding valuation adjustment, or FVA, has long been the subject of heated debate within the industry. Intended to ensure banks account properly for the cost of funding unsecured derivatives transactions, it is one of the concepts covered by XVA. However, questions persist around how FVA should be applied and calculated. As part of the Totem XVA service, we collect a range of submissions from clients - including on FVA - which gives us unique insight into patterns and trends. Banks are interested in comparing submissions to their peers and so we have sought to review the significance of various factors and how they affect submissions. FVA is where we often see larger differences in pricing between participants and so our analysis is focused specifically on this concept.

In this analysis, the FVA submissions are reviewed in absolute terms. The term 'above the consensus' refers to a larger negative adjustment and 'below consensus' refers to a smaller negative adjustment, as compared to the consensus data. One of the significant variables in banks that submit to the XVA service is the region where they are based. The question therefore arises: does region have a significant impact on the adjustments that are submitted?

Our analysis shows that there does appear to be some relationship between region and USD adjustment. This relationship is similar across the different scenarios, so we have chosen the 10Y swap as the sample scenario against the IG Sovereign counterparty. 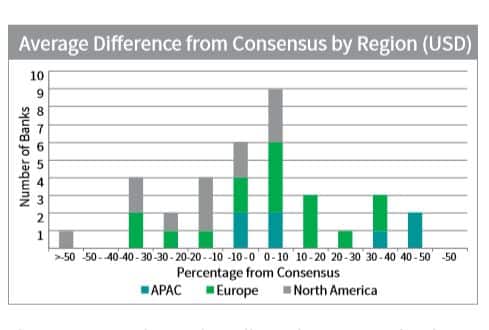 These findings indicate that region can play a factor in submissions, although European banks appear to have the least consistency. The picture is slightly different when looking at the 10Y EUR swap which shows a different spread. Although the European banks are still spread across the range, there are a number of banks from different regions submitting large adjustments. Both APAC and North American banks show a much wider distribution, varying from one of the smaller adjustments to one of the largest. 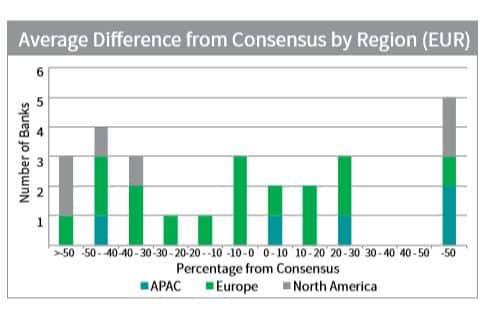 The data indicates that for a EUR swap, the bank's domicile is not a significant factor affecting its FVA, but there does appear to be greater influence of domicile when looking at FVA on USD trades. This is most apparent for North American and APAC banks. The dispersion in European banks - when compared to other regions - may be in part due to the differing local currencies. Not all European banks have EUR as their local currency and this may cause some dispersion in the results. A similar dispersion to the EUR trades was observed in the GBP trade, where domicile was not a significant factor.

Reviewing the internal relationship between currencies for banks based in three regions and using the USD FVA adjustments as the base, the average basis between GBP and USD trades is smallest and the basis between AUD and USD is the largest. This demonstrates that in all regions GBP FVA is, on average, closer to the USD FVA than either AUD or EUR to USD. The AUD basis is positive, signifying larger AUD FVA adjustments and the EUR basis is negative representing a smaller EUR adjustment. The GBP basis is not consistent across regions. 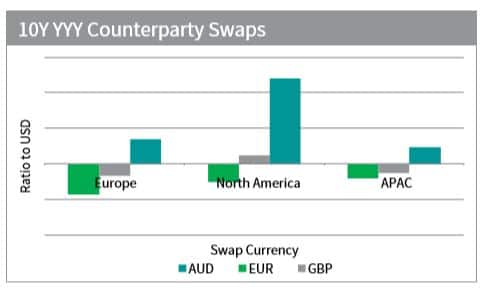 Of all of the factors we reviewed, region appears to have the most significant effect on FVA with the other factors (credit spread, rating and bank structure) having less impact. Data was reviewed over a number of months and a variety of scenarios analysed and no relationship was found between these three additional factors. Therefore, it is highly possible that if there is a relationship observed in these factors, then region may be affecting them.