Impact of growing headwinds in China on the specialty chemicals market

After 30 years of high-speed growth, the Chinese economy is due for correction. In China,real-term GDP grew at an average of 8.4% per year from 2007 to 2017. However, GDP growth is projected to slow to 6.6% in 2018, 6.3% in 2019, 6.0% in 2020, and 5.9% in 2021. The big problems include non-performing assets - including excessive production capacity and non-competitive companies - and significant environmental pollution. The manufacturing industry struggled for the last five years with excessive competition, mainly based on low-price strategies and expanding capacity. To restructure the supply side, the Chinese government implemented a deleveraging policy and optimized non-performing assets. These changes reduced excessive production capacity and caused some non-competitive companies to exit the market. In the short-term, however, these policies created an economic slowdown.

The other major factor affecting the Chinese economy is the acceleration of China's environmental protection campaign since early 2017. Tightening environmental protection added new business operating costs and led to factory closures in high-polluting sectors, which weighed on industrial production. The 2017 Annual Economic Work Conference further emphasized environmental protection as one of the major policy focuses of the government in the coming three years. These policies mainly affect small and private companies, causing some to close their factories. In contrast, large enterprises can afford to install equipment and upgrade technology to meet the standards, allowing them to survive and benefit.

Stricter environment regulations have negatively impacted industrial output since 2017. As indicated in Figure 1, industrial output growth remained weak as light-manufacturing output declined. Under these circumstances, the growth of the Chinese specialty chemicals market also has been slowing. In addition, recent trade friction between the United States and China reduced Chinese exports. 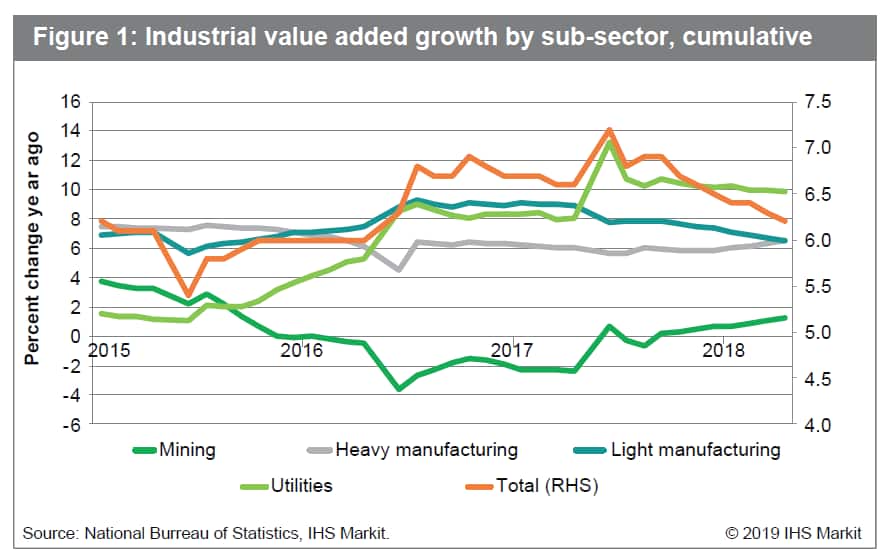 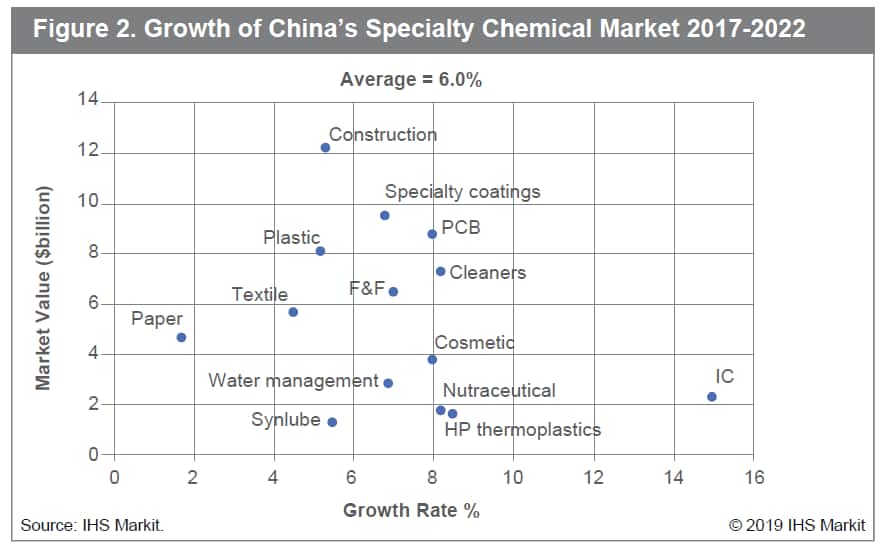 Specialty chemical growth rates in China vary widely depending on industry trends, ranging from 1.7% for specialty paper chemicals to 15% for integrated circuit (IC) processing chemicals. For example, specialty chemicals used for paper processing are decreasing mainly because of digitalization, creating stagnant industry growth. Many small to mid-sized paper processing mills have closed in response to strict environmental regulations, reducing specialty paper chemicals consumption. Another low growth specialty chemicals sector is that for textile industry. China's rapidly increasing labor costs are causing textile industry to move to Southeast Asia, which results in lower growth rate for the specialty chemicals. In contrast, strict environmental regulations have catalyzed the replacement of some non-environmental friendly or harmful chemicals, such as bleaching agents containing chloride [hydro-fluorocarbon used as blowing agents, and some types of brominated flame retardants].

Although the average growth rate for chemicals used in manufacturing has declined, some Chinese manufacturing markets are still growing. For example, specialty chemicals for personal services and goods, including cosmetics, nutraceuticals, and flavor and fragrances are growing at a faster pace because they have low elasticity relative to GDP. Another high-growth market is specialty chemicals for production of ICs. Because China heavily relies on imported ICs, its government implemented a policy to increase domestic manufacturing ICs from the current 20% to at least 50% within the next five years. Electronics chemicals growth is also stimulated by high-technology advances, including artificial intelligence and the Internet of Things. Consequently, China is investing in R&D for electronics and related manufacturing industries. Automotive computerization and the development of electric vehicles also positively affects the consumption of IC chemicals. In the coming years, we expect the market for IC and semiconductor processing chemicals to rise 15% and the market for printed circuit board and IC packaging materials chemicals to expand 8%. High-performance thermoplastics, which are mainly used in automotive and electronic products, also will grow quickly.

Another factor changing the specialty chemical market is the evolution of Chinese lifestyles and consumer attitudes. A focus on rapid growth has shifted to improved quality, and price-conscious consumers stress quality. Because these conditions make it difficult to achieve high growth rates based on volume, the government and investors are paying more attention to quality.

Many other Asian countries that export large volumes to China are affected by its economy. For example, Taiwan and South Korea send 30% to 40% of their total exports to China on value basis. Singapore and the Philippines export 20% to 30%. And Japan, Malaysia, Thailand, and Indonesia export 10% to 20%. Therefore, any slowdown in the Chinese economy will negatively impact these countries.

Other Asia excluding China accounts for 23% of the world's specialty chemical markets. IC chemicals represent the largest market segment, especially in North Asian countries. Taiwan, Japan, and South Korea are major producers of ICs, many of which are exported to China. These countries increased their IC exports to China as the Chinese electronic industry grew. However, IC imports are falling with the Chinese demand for electronics ICs. Chinese imports of ICs from Taiwan, South Korea and Japan have been decreasing since November 2018. In December 2018, Chinese imports of ICs decreased from Taiwan by 21%, South Korea by by14% , and Japan by 9%, compared with December 2017. This trend will continue for at least the first half of 2019.

The slowdown of the Chinese economy will affect the specialty chemical market not only in China, but also in Asian countries that trade large volumes with China. These countries should prepare for lower Chinese growth by stimulating domestic consumption of specialty chemicals. In addition, trade friction between the United States and China could worsen the Chinese economy, although the precise impact is still unknown.