Impact of COVID-19 on the Chinese and global economy

The outbreak of the novel coronavirus (COVID-19) is for the time being the most significant black swan of 2020 apart from the increased tensions between the US and Iran which could adversely affect not only the Chinese but the global economy as well.

On 31 December 2019, the World Health Organization (WHO) China Country Office was informed of cases of pneumonia unknown etiology detected in Wuhan City, Hubei Province of China. The Chinese authorities identified a new type of coronavirus, which was isolated on 7 January 2020. On 30 January 2020, WHO issued a Public Health Emergency of International Concern. As of 16 February 2020, WHO reported 51,857 confirmed cases worldwide affecting 25 countries with the epicenter in the south-eastern part of mainland China with 51,174 confirmed cases (with the highest number of cases in Hubei (38839), Guangdong (1316), Zhejiang (1167) and Henan (1231)). The number of deaths reported so far amounts to 1666 in China and 3 abroad. WHO asses the risk of the global pandemic as high and with reference to China as very high. At this stage, we do not fully understand how the 2019-nCoV spreads. This makes containment efforts difficult. WHO officials state clearly that at this stage one cannot predict the direction, duration, scope and scale of the epidemic. This creates an extra dose of uncertainty. Some experts expect the outbreak to last at least until May 2020.

SARS or severe acute respiratory syndrome was a viral respiratory disease of animal origin caused by the SARS coronavirus (SARS-CoV). Between November 2002 and July 2003, an outbreak of SARS in the southern China infected in total 8,098 people (mostly in China), resulting in 774 deaths reported in 17 countries (with a fatality rate of 9.6%), with the majority of cases in mainland China (5,327) and Hong Kong (1,755). No cases of SARS have been reported worldwide since 2004. The Chinese government was criticized for mishandling the outbreak and reacting too slowly (the first case was reported on November 16, 2002, and the WHO was informed only on February 14, 2003). In the case of SARS, it took more than half of the year to contain the spread of the virus.

Considering the lessons from SARS, the Chinese government reacted fast and immediately informed the international bodies (such as the WHO). The measures introduced by China to contain the outbreak at its sources are unprecedented - the quarantine has been levied originally on the city of Wuhan (the source of the outbreak) and later extended to the whole province of Hubei (affecting more than 60 million people). Ahead of the National People's Congress to begin on 5 March 2020 Chinese authorities introduced a two-week quarantine for travelers from other regions of China upon visiting Beijing.

The steps taken so far could have slowed down the spread of the disease to the rest of the world. According to the WHO, a widespread community transmission has not been observed outside of China which is encouraging. The outbreak could be more severe than SARS and could be potentially more disastrous for countries with less efficient health systems.

The impact of SARS on the Chinese economy

Looking from hindsight SARS had a limited impact on the Chinese economy over the long term. However, the short-term impact (quarterly) was detectable. China was the world's 6th largest economy in 2003 experiencing high growth rates over a prolonged period. The SARS outbreak caused China's real GDP growth to slow from 10.5% year over year in the first quarter of 2003 to 8.9% in the second quarter of 2003 and then it accelerated to 10.1% in Q3 and 10.5% in the last quarter of 2003. The overall cost of SARS for China is sometimes estimated as high as 0.5 to 1 percentage points (in the counterfactual scenario).

Expansion in Chinese exports, however, remained steady throughout 2003. The global economy was coming out of a downturn in 2001 to 2002 (real GDP growth rates were 1.74% in 2001, 2.05% in 2002 and 2.88% in 2003) and this fueled demand for Chinese goods allowing the economy to smoothly recover from the outbreak. On the other hand, the y/y growth rates in Chinese imports declined significantly from January to April 2003. Overall, the contribution of trade to Chinese growth, however, remained positive. 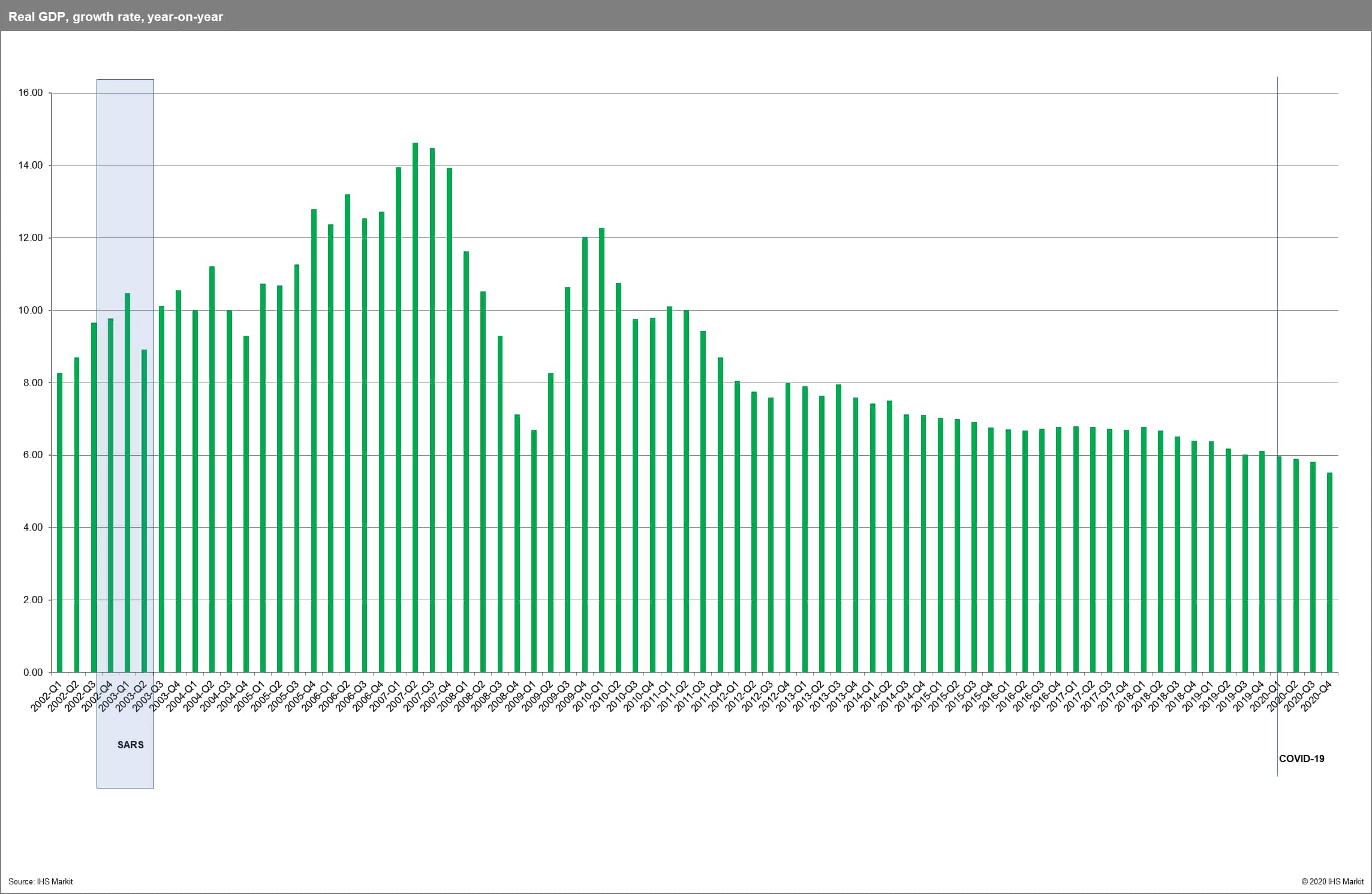 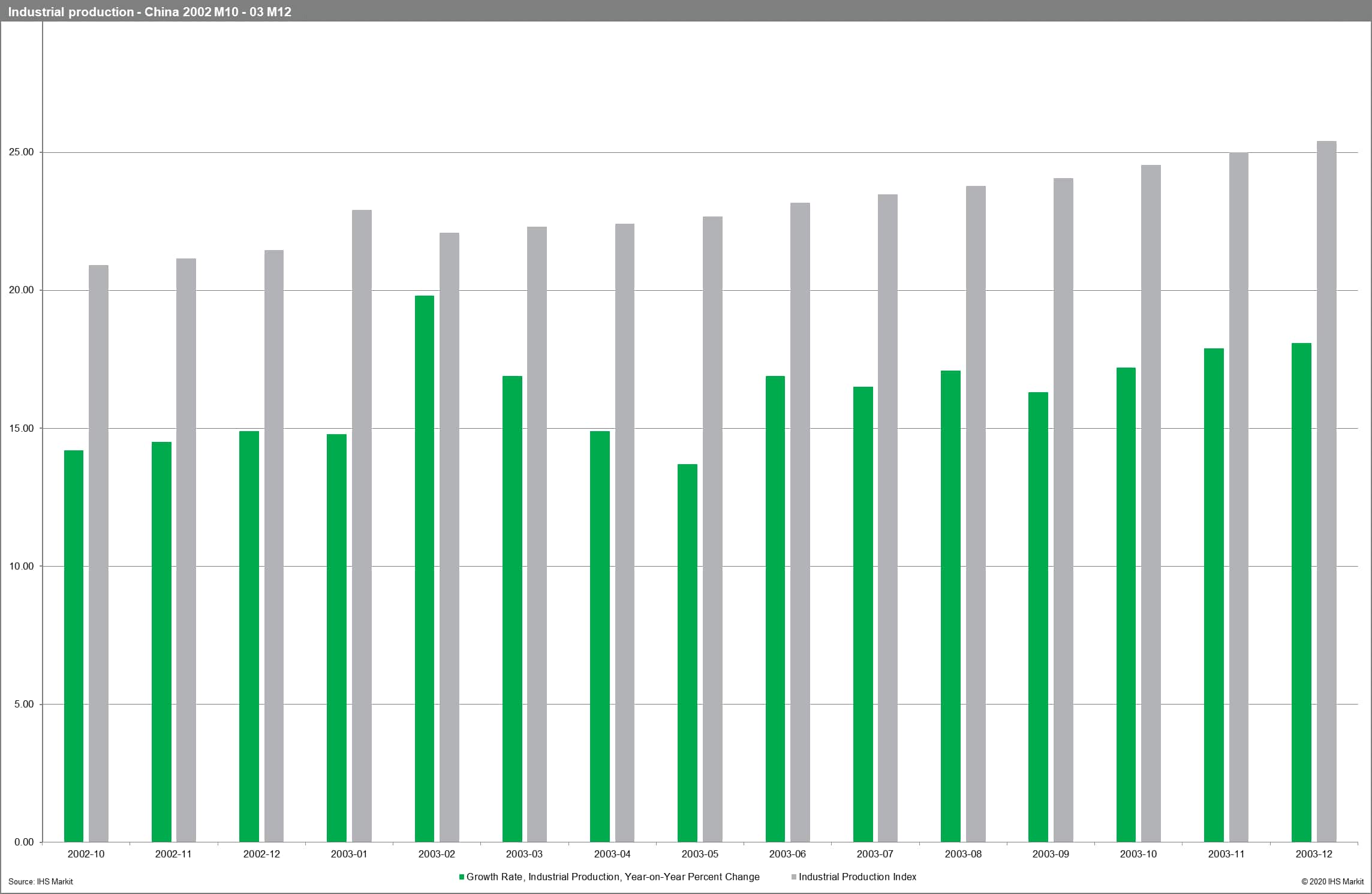 China in the global economy

In comparison to the time of the SARS pandemic, the role of China in the global economy has significantly increased. China is currently the second-largest economy of the world after the US. It is the second-largest importer of manufacturing goods (1.674 trillion USD in 2019) accounting for 9.1% of global imports and the largest exporter (2.524 trillion USD in 2019) responsible for 13.7% of global exports. It is a key country for industrial production and has a key significance for global value chains. China's role globally and in the South Asian region, in particular, is currently much greater than in 2003 and the region's economies are more interlinked.

In comparison to 2002-2003 period, the rates of growth are much more moderate with the real GDP growth rate y/y reported at 6.0% in the third quarter of 2019 and 5.8% forecasted for 2020 (this is still significantly above the world average or the growth rates for the advanced states). 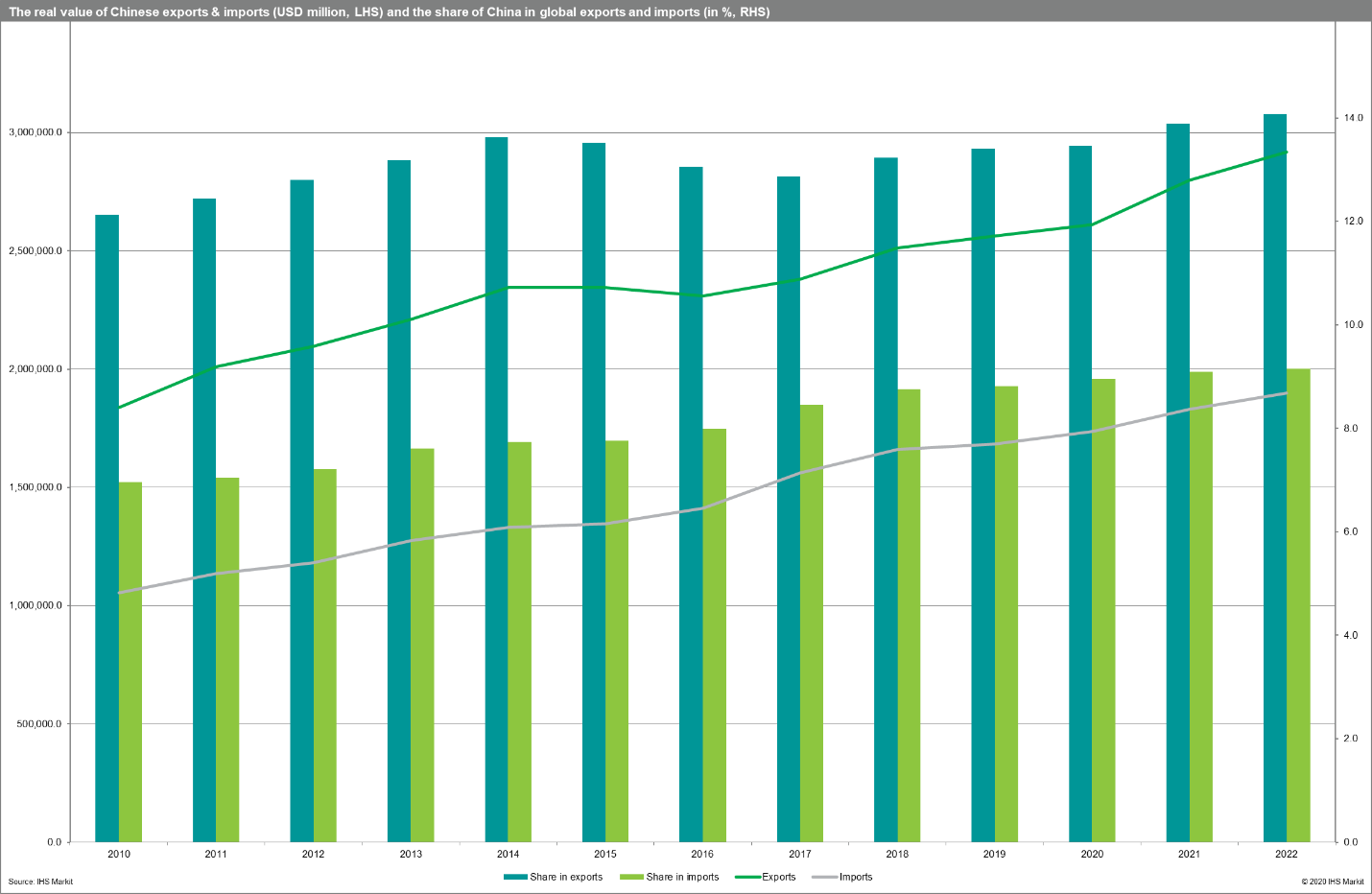 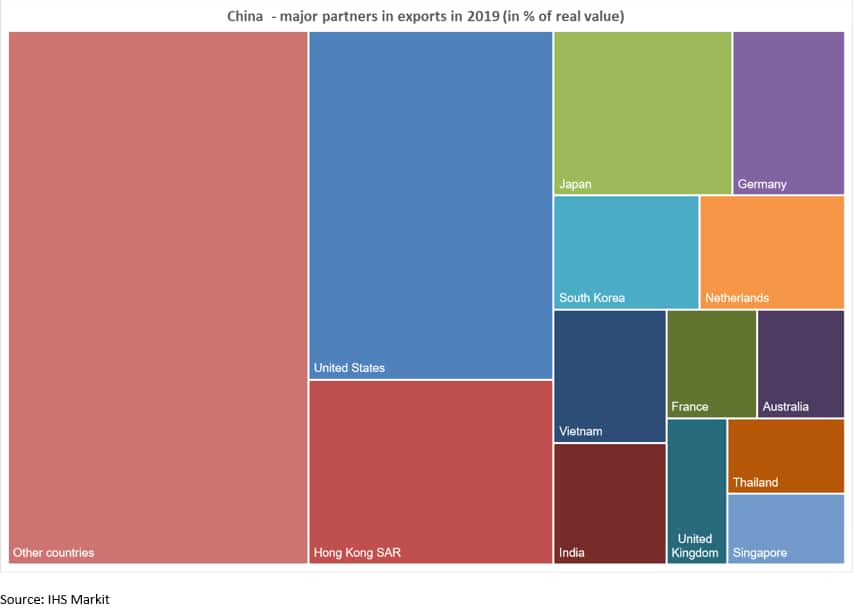 The share of China in global exports was the highest in the case of computers, office, communications, and professional equipment (34.1%), textiles, leather, and apparel (32.8%) as well as glass and non-metallic products (23.8%). The impact could be thus asymmetrically affecting various GVC to a different extent. For instance, despite the share of China of 5.2% in the global exports of transportation equipment and parts, the outages in the production of key parts already have adversely affected production in the automobile industry globally. Some services sectors could be significantly affected including tourism and transportation (e.g. airline sector).

As the outbreak is mostly concentrated in the Hubei province it is worth to look at the structure of the economy of the affected province.

Hubei province in central China is located at the junction of the Yangtze River Economic Belt from east to west and the Beijing-Guangzhou Railway Economic Belt from north to south. The province is bordered by Shaanxi, Henan, Anhui, Jiangxi, Hunan, and Chongqing Municipality.

The province plays a major role as the largest transportation hub of central China with a significant industrial base and is key to the Central Region Development strategy and the development of the Yangtze River Economic Belt. Hubei's GDP ranks 8th among all provinces in China. Major industries located in the Hubei province include a mixture of traditional and hi-tech sectors such as automobiles, food processing, electronics information, equipment manufacturing, textiles, petrochemical as well as iron & steel.

The impact of COVID-19

The strict restrictions introduced by the Chinese government to control the spread of COVID-19 have so far caused a significant reduction in economic activity in particular to Wuhan and Hubei province. It is worth to note that 26 of 31 Chinese regions have announced extended work stoppage for non-essential enterprises (New Year holidays have been extended; confinement was imposed on millions of residents and travel restrictions within China have been imposed).

The impact of the coronavirus will mostly hit China's first-quarter growth. It could extend the second quarter as well if the outbreak lasts longer (till May 2020 if the SARS scenario repeats itself). The overall impact is likely to lower the Chinese real GDP growth rate in 2020 to approx. 5.4% Various economic research teams have already cut their forecasts for 2020 by 0.2 to 0.8 percentage points.

The Chinese economy is likely to bounce back after the new outbreak is contained with a rise in the activity in the Q2/Q3 of 2020 due to policy measures described above and the expected increase in consumption spending (with a significant increase in retail sales).

The disturbance to industrial production could be more severe due to a drag caused by the prolonged production shutdowns. These create significant supply outages and disruptions to the internal and external logistics networks and trade flows. It is important to note that the current global manufacturing inventories are generally low. If the situation is prolonged, the adjustments to GVC will be necessary with some production shifting to countries not affected by the outbreak. The impact on global trade flows and shipments could thus be significant and last longer.

The unadjusted PMI index for Chinese manufacturing by IHS Markit readout for January 2020 is below the benchmark value of 50.0 points indicating a contraction. It is worth to note that is less severe than the readout last year. 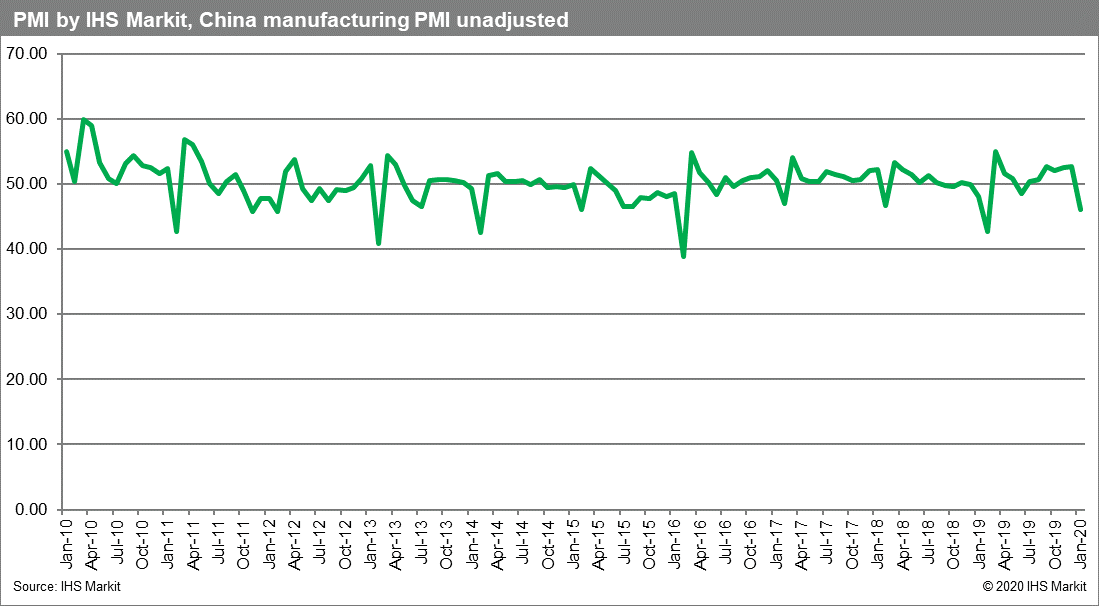 The most recent trade data are currently available for December 2019, so it is difficult to accurately predict the scale of the effect on Chinese exports and imports. The first estimates showing the scale of the actual downturn will become available only in March. The effect on the trade flows will become more evident only from March onwards (May on in the available data) due to the typical two-to-three-month lead time between purchase and delivery.

The recent webinar by the IHS Maritime& Trade team raised several important issues. The coronavirus couldn't come at a worse time for global shipping. The predicted impact is likely to be much larger than SARS. Given the scale of the economic shock, in the very short to medium-term, shipping demand globally is likely to be severely hit. The expected Chinese demand slowdown is already depressing freight rates, hitting market sentiments hard. Commodity shipping, dry bulk and oil tankers are likely to be worst impacted in the short-term. The impact on container lines could be significant as well. 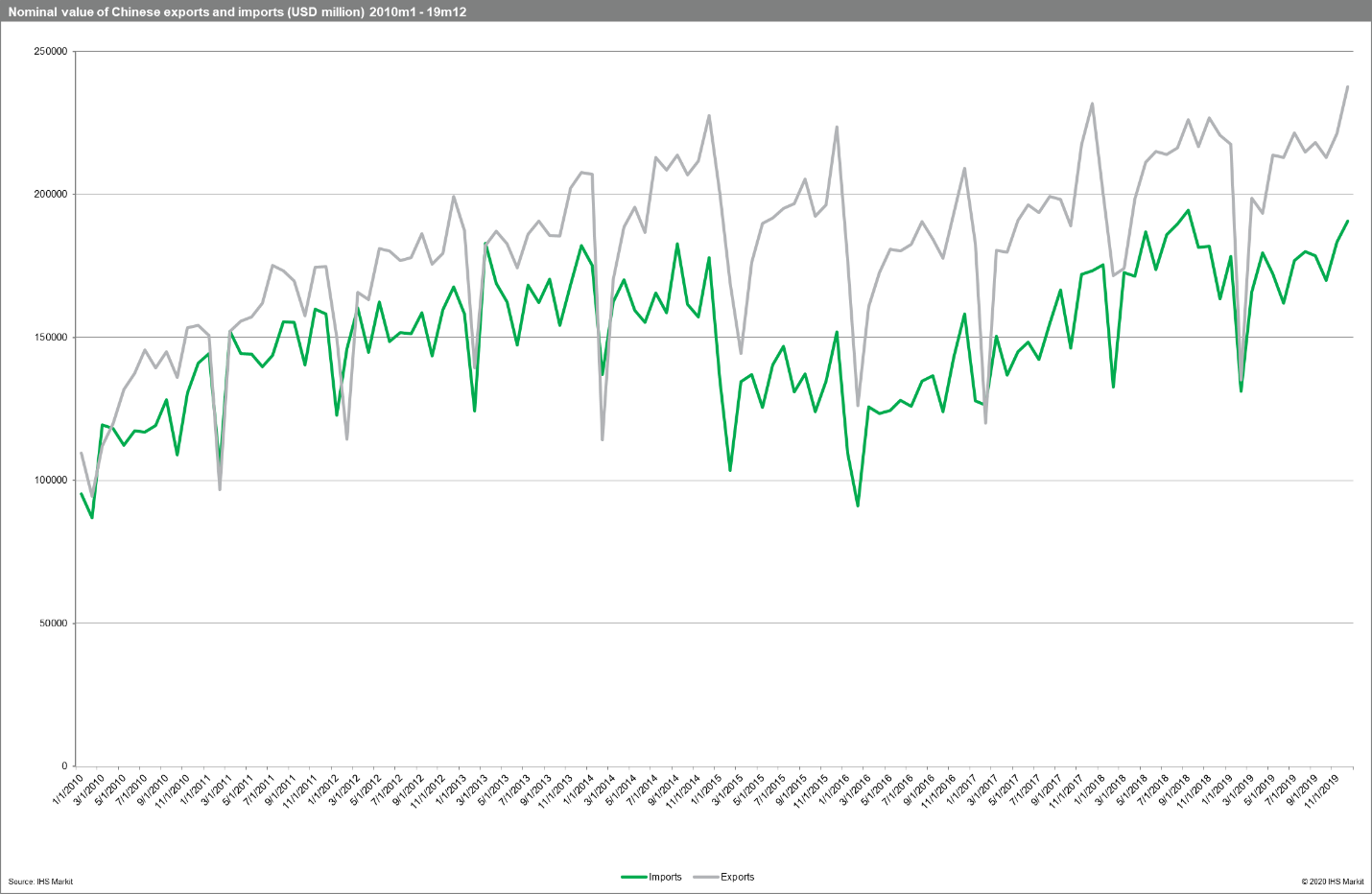 The economic impact of the outbreak will depend on its duration and severity. The effect for the global economy will obviously depend as well on its geographic scope. If it is contained to a large extent to China, it will impact the country the hardest. If it starts to spread outside, the impact could be significantly more severe affecting, in particular, the ASEAN countries (Hong Kong, Singapore, etc.) or Japan. The disturbances within global value and logistics chains could accumulate if the containment measures will have to be prolonged. The impact could be the largest on economies most linked to or dependent on China.

It is worth to note that several economies are already reporting the adverse impact of the outbreak. These include for instance Singapore (Singapore's Prime Minister Lee Hsien Loong is already referring to a potential recession) or Germany (Germany technically registered zero growth in late 2019, and the prospects for the expected turnaround in early 2020 disappear as China is one of the key export destinations and suppliers to German economy).

The market sentiment overall is bad and the increased global uncertainty due to the outbreak can adversely affect the prospects for a global recovery.

This column is based on data from GTA Forecasting and other resources from IHS Markit if not stated otherwise.