Brexit uncertainty has cast a dark cloud on the UK economy since the referendum in June 2016 when the United Kingdom chose to leave the European Union. Since then, there has been slow down in foreign investments and new manufacturing capacity. Consumer confidence has also taken a hit. Leaving the European Union with or without a deal has created a high degree of uncertainty for the textile industry also.

Currently as part of the European Union, the United Kingdom enjoys free movement of goods within the union. Being part of the EU, the UK is also a member of many duty-free and duty-preferential treatments with other countries for a variety of products which include textiles and its raw materials, such as polyester and nylon fibers (staple fibres and filament yarns). Currently, the importing of polyester and nylon fibers into the EU from a non-member country, with no free trade agreement or Generalized System of Preferences (GSP) benefits, incurs a 4% import duty. In the UK, the major demand of these products is met by imports. The following article discusses whether there has been any change in the supply pattern of these products to the UK from EU countries and non-EU countries in recent times. 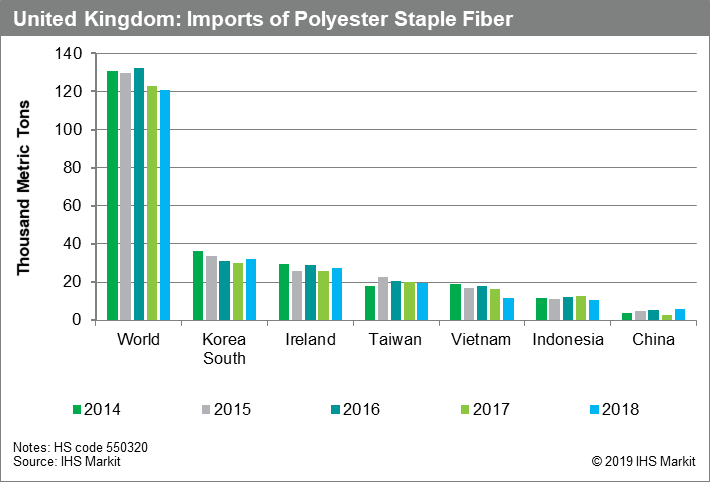 UK imports of polyester staple fiber (PSF) have reduced from 131 kta in 2014/2015 to 121 kt in 2018. The quantities reduced by 9% from 2016 to 2018. The top 5 PSF exporters to the United Kingdom in 2018 were South Korea, Ireland, Taiwan, Vietnam and Indonesia. These 5 countries met 80% of the UK's PSF demand. Imports have reduced from most of the exporting countries. The main reduction is observed in imports coming from Vietnam, with a 35% reduction from 2016 to 2018. There is about a 5% reduction in imports from Ireland and Taiwan in this time frame. 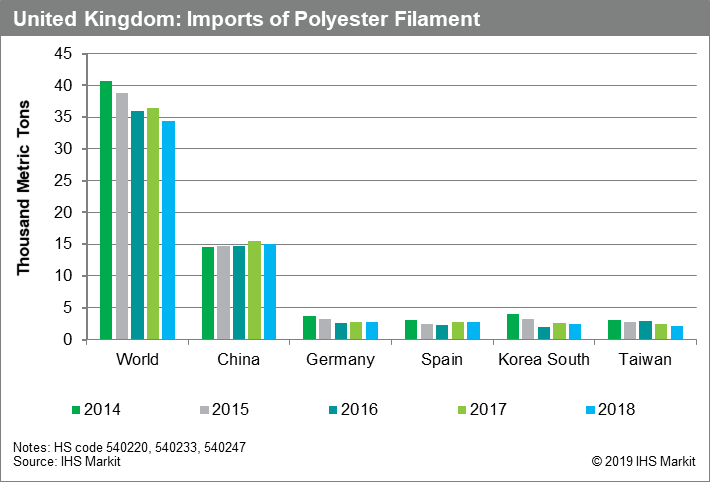 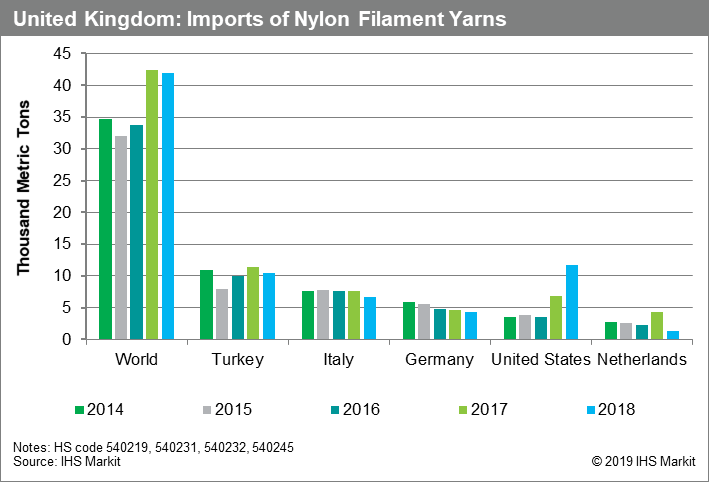 As of now, the custom tariffs in the UK for polyester and nylon fibers will remain unchanged until the announced Brexit date of 31st October 2019. There has already been some change in the import patterns as explained above. We feel that the product flow of these products between the UK and the EU countries will be impacted further if non-EU 3rd country duties come into place between the European Union and United Kingdom in the event of a no deal.

Similarly, many such analyses and the expected impact of current market factors are covered in our World Analyses for Polyester and Nylon Fibers. Such subscription will provide deep market insight into the major challenges these industries are facing.