US business activity edged closer to stagnation in June, according to flash PMI survey data from IHS Markit. Output across the manufacturing and services economies expanded at the slowest rate since February 2016, the rate of increase having slowed markedly from robust rates of expansion seen earlier in the year. The composite PMI output index fell from 50.9 in May to 50.6 in June

The June reading rounds off a second quarter in which the PMI survey data point to the pace of economic expansion slipping to 1.4%1. 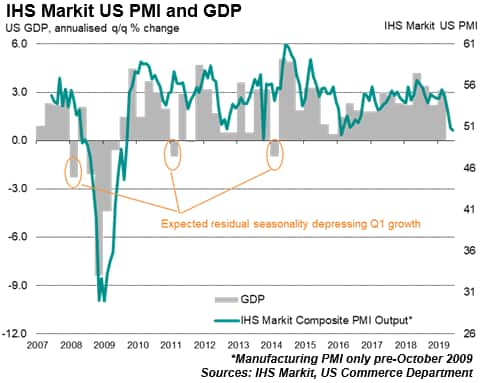 Manufacturing led the weakness in June. The headline IHS Markit Manufacturing PMI fell to 50.1, its lowest since September 2009 and only fractionally above the neutral 50.0 threshold. Historical comparisons of the survey's factory output index against the equivalent official gauge adds to the gloomy picture, running at a level consistent with production dropping at a quarterly rate of just under 1%. As such, the data indicate that the manufacturing downturn seen the first quarter likely intensified in the second quarter. 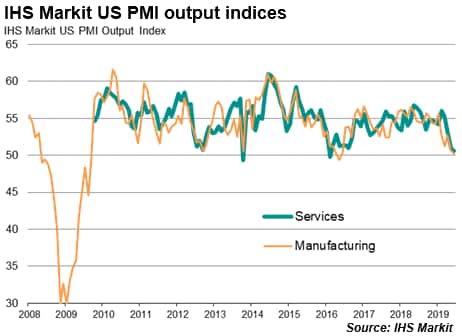 A key development in recent months has been a broadening-out of the slowdown, whereby the manufacturing-led downturn has shown signs of increasingly infecting the service sector. The strong services economy seen earlier in the year has since buckled to show barely any expansion in June, recording the second-weakest monthly growth since the global financial crisis.

Overall business optimism about the future has also become more subdued. The survey's gauge of sentiment about the year ahead slipped to a new series low (this series began in 2012 so has a shorter history than the main PMI indices). Companies' worries centred on tariffs, geopolitical risks and slower economic growth in the months ahead. 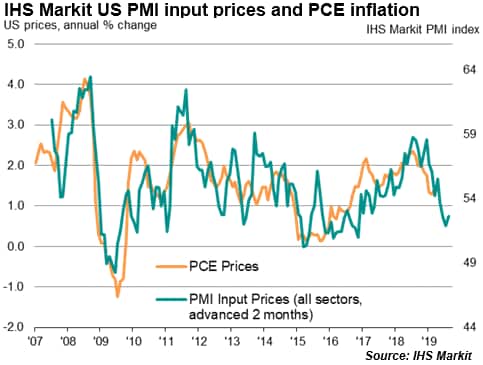 The June survey also brought signs that the labor market is weakening, albeit with jobs growth remaining relatively resilient. The latest rise in payrolls was the weakest recorded by the survey since April 2017. Anecdotal evidence suggested that heightened economic uncertainty had acted as a brake on staff hiring. The survey data for June indicate non-farm payroll growth of 140k, averaging 150k in the second quarter after a 200k signal for the first three months of the year.

Prices for goods and services meanwhile rose at a slightly increased rate in June, mainly due to tariffs. To illustrate, some two-thirds of all manufacturers attributed some or all of their raw material cost increases to tariffs during the month. However, the inflationary impact of tariffs was offset by a broader softening of demand, which reduced suppliers' pricing power.

The overall rate of input cost inflation in manufacturing eased to a two-year low, while average selling prices for goods and services showed one of the smallest rises seen since late-2016.

1 Based on a regression analysis using the composite PMI survey indices of output and new orders as explanatory variables of annualised GDP growth from 2009 to 2018. An adjusted r-square of 0.75 is achieved with GDP Q1 outliers removed as shown in chart.