The US PMI surveys tell a tale of two economies in February. While manufacturing struggled, with the survey consistent with a near-stalling of factory output and order books, the service sector remained encouragingly resilient, enjoying its strongest burst of activity for eight months.

An improvement in the service sector activity index to 56.0 contrasted with a decline in the manufacturing output index to 52.7. With the size of the vast service sector overshadowing the weaker manufacturing sector, the two surveys consequently suggest the overall pace of economic growth accelerated in February. At 55.5, the final composite PMI output index, which covers both manufacturing and services, rose from 54.4 in January to reach a seven-month high in February.

Aggregated inflows of new orders likewise picked up, rising at the fastest rate for four months. However, as with output, the gains were led by the service sector, with factory new orders growth easing closer to stalling territory.

The improvement in output and orders in February suggest the rate of economic growth in the first quarter is running at a similar pace of that seen in the closing months of 2018. Having correctly indicated that the economy grew at a slower but still solid pace in the fourth quarter (our model from the survey indicated 2.5% growth against an initial official estimate of 2.6%), the composite PMI data for the first two months of 2019 point to a similar 2.6% annualised rate of expansion in the first quarter (a 2.4% rate of expansion in January was followed by an upturn to 2.7% in February). 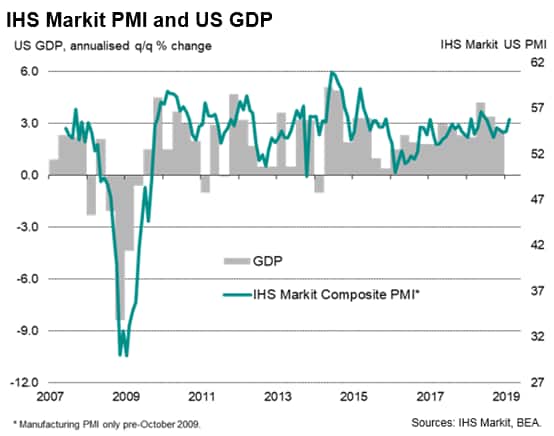 In addition to signalling stronger economic growth, the surveys suggest hiring also remained encouragingly solid in February with a 250,000 non-farm payroll rise indicated, albeit predominantly driven by the service sector.

The worry is that the manufacturing slowdown will spill over to the service sector, dampening economic growth in coming months. Historical comparisons from the survey data over the past decade highlight how business activity within the two sectors generally follows similar cycles.

Companies themselves certainly appear to have become more circumspect. Business optimism about the outlook cooled in February amid worries over the impact of tariffs, trade wars, higher prices and rising interest rates. Manufacturing sentiment fell especially sharply to the second-lowest in just over two years, while service sector optimism also waned to one of the weakest seen over the past year. 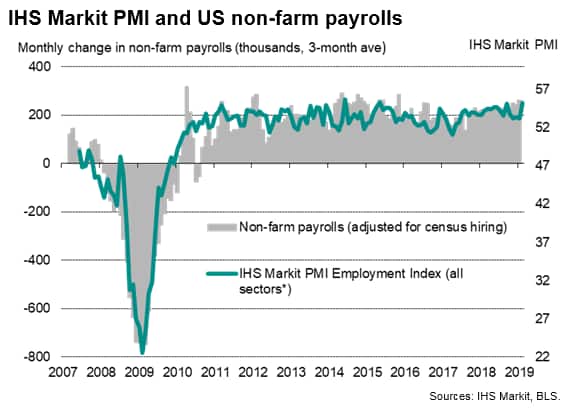 Fourth quarter GDP surprised analysts to the upside, with an initial estimate from the BEA of 2.6% coming in ahead of the consensus expectation of a 2.1% increase, but was in line with the IHS Markit PMI signal. In fact, as far back as October we had been indicating 2.5% growth for the fourth quarter, confirming that estimate in November, December and January.

The consensus beating estimate highlights how, with over a decade of history in the US, the IHS Markit PMI can now be used to accurately predict US GDP growth in advance.

IHS Markit PMI data are already widely used to nowcast GDP in many economies including the Eurozone and UK by organisations which include central banks. ECB staff describe the "outstanding PMI-based GDP track record" in the euro area with a recent paper highlighting how "a tracker for GDP growth using only the PMI is of similar accuracy for the final GDP release as the first GDP release." Given that the PMI is available well in advance of the first official GDP release, the PMI is consequently extensively used in nowcasting and European policymaking. 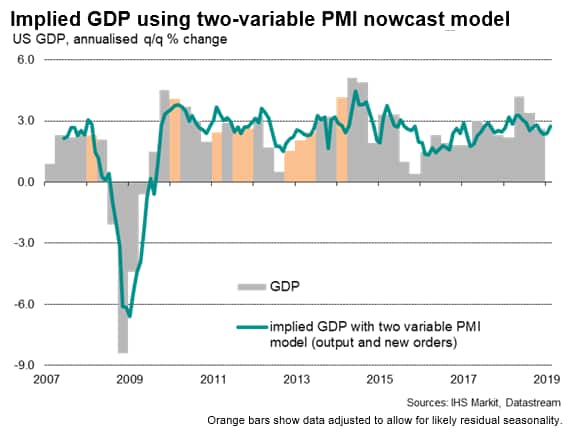 In the US, comparisons are difficult as the official GDP data have tended to suffer from undue volatility, mainly in the first quarters of each year between 2008 and 2014. This is thought to be due to the official data not fully capturing seasonal influences. The PMI should not be expected to predict such errors and the inclusion of such 'outliers' would only distort the model and resultant GDP estimates.

Allowing for such residual seasonality lifts the correlation of GDP with the PMI to 87%, therefore improving the model's predictive power for future GDP estimation. The adjusted r-square of the outlier adjusted model is 0.76. Once allowance is made for GDP outliers as described above, the model has provided an advance warning of all turning points in the economy over the past decade as well as providing an accurate guide to GDP growth rates. 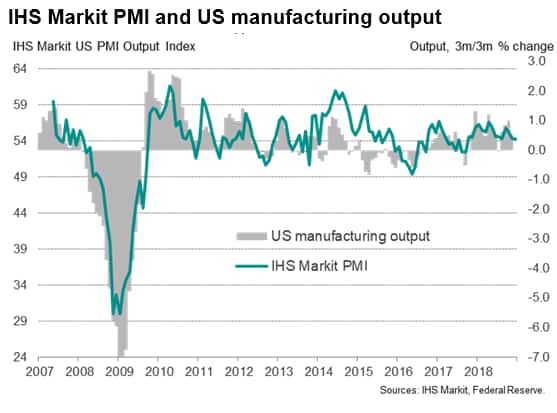 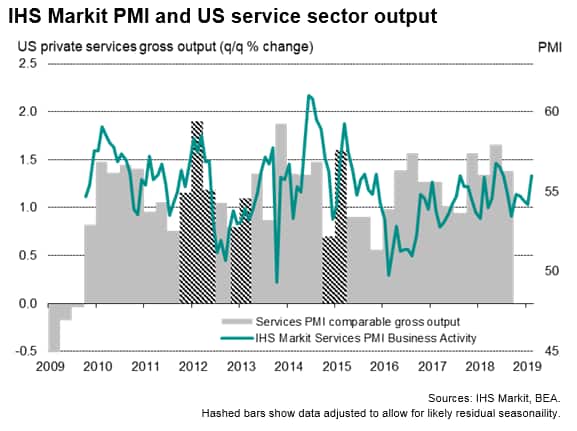