The first quarter of 2020 proceeded calmly until the reality of the COVID19 pandemic became clear in March, which has struck fear into markets and pumped the breaks on the economy. Credit is in the red across the board along with other risk assets, however not as bad as it might have been without unprecedent Fed action. Alongside falling markets and illiquidity in the cash bond market, activity in tradable products linked to iBoxx and CDS indices remained robust, and in many cases increased as investors used these index products to help navigate the crisis.

All US credit segments landed in the red for the quarter, however high yield and leveraged loans significantly underperformed investment grade, returning -11.99% and -11.31%, respectively.

US Investment grade was down as much as 13.53% YTD on March 20th, however it began to rebound on Monday, March 23, following the day's Fed announcement of their emergency action to support financial markets and the economy during the coronavirus pandemic. IBOXIG closed the quarter with a mere 3.24% loss, however this was realized from annualized volatility of 18.98% for the period.

Markets were calm the first two months of the year, with volatility exploding in March. High yield and leveraged loan annualized volatility were 20.38% and 22.77% in the first quarter, which was 6.5x and 8.8x their volatility in 2019, respectively.

Following the collapse in oil prices to coincide with the COVID19 pandemic, Oil & Gas issuers were the worst performers in both IG and HY, returning -18.53% and -38.5%, respectively. All sectors in HY landed in the red for the quarter, however two sectors managed into the black with IG - Health Care (+1.64%) and Technology (+1.05%).

The sharp increase in volatility and falling markets resulted in mounting illiquidity in cash bonds, as evidenced by the jump in bid-ask spreads as a percentage of bid prices. Looking at the par-weighted average bid-ask spreads for each bond in their respective index on every Wednesday in 1Q2020, we can observe rising spreads across market segments.

IBOXIG, IBOXHY and LiLLi had bid-ask spreads of 0.31%, 0.32% and 0.59%, respectively, as of January 8th, and remained stable until mid-March. IG and HY bonds were comparable in terms of trading costs, while leveraged loans had roughly double the trading cost of corporate bonds. As of March 25, IG and HY bonds, and Lev Loan bid-ask spreads had jumped to 1.28%, 2.10% and 4.59%, respectively - 4.1x, 6.5x and 7.8x their start of the year levels. These results are drawn from iBoxx Liquid Indices, which are designed to include the most liquid bonds for their given market segment. This makes the increase even more significant as the bid-ask spreads show the rise in trading costs for the most accessible corporate bonds and loans in the market. 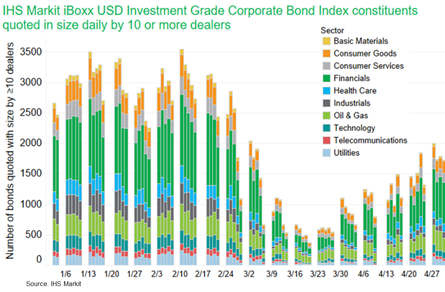 The iBoxx $ Corporates Index, which is a broad benchmark tracking USD investment grade bonds, has seen $125.6 billion in notional value of fallen angel debt YTD. 76% of the debt in the index that fell to HY occurred in the month of March. We define fallen angels as entities that that see their Markit iBoxx Rating move from IG to HY, which is based on an average of S&P, Moody's and Fitch.

40.55% of fallen angels within the iBoxx $ Corporates Index came from the Oil & Gas sector, while 45.18% were Consumer Good issuers.

One of the largest fallen angels to fall in quarter was Kraft Heinz Foods Co., which saw $19.7bn of its debt downgraded to BB. Kraft Heinz was also removed from the on-the-run CDX Investment Grade Index and was added to the latest series of CDX High Yield due to its move to the HY universe. 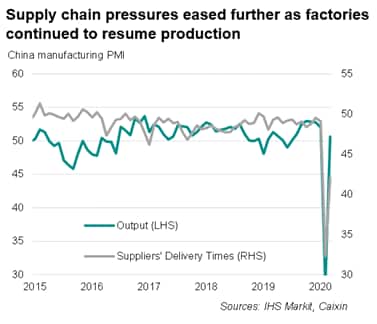 Another notable fallen angel, albeit with less debt that was in the iBoxx $ Corporates Index, was Macy's Retail Holdings Inc., which made headlines in March for furloughing most of its workforce and disclosing they will draw $1.5bn from their credit revolver. For more on trading shopping mall debt, we now turn to CMBX.NA.BB.6.

The Markit CMBX Series 6 BB-rated index has been in the headlines due to investors like Carl Icahn and Marc Rosenthal using the index to short shopping mall debt. The index tracks credit default swaps on the originally BB-rated tranches of commercial mortgage backed securities issued in 2012. The index has been identified as a proxy for shopping mall debt due to its relatively high concentration of mortgages backing shopping malls within the index. The index includes 37 mortgages backing malls, while the BB tranche is the riskiest CMBX tranche, assuming losses before all other CMBX tranches.

The index began the quarter at a price of $88.68 and fell to a low of $41.22 on March 23, a 53.52% drop in price. The index price started to rise as the market digested the Fed announcement, which included a historic commitment to add agency CMBS alongside traditional agency MBS to their holdings. The index closed the quarter with a price of $60.94 a price return of -31.28% for the quarter. 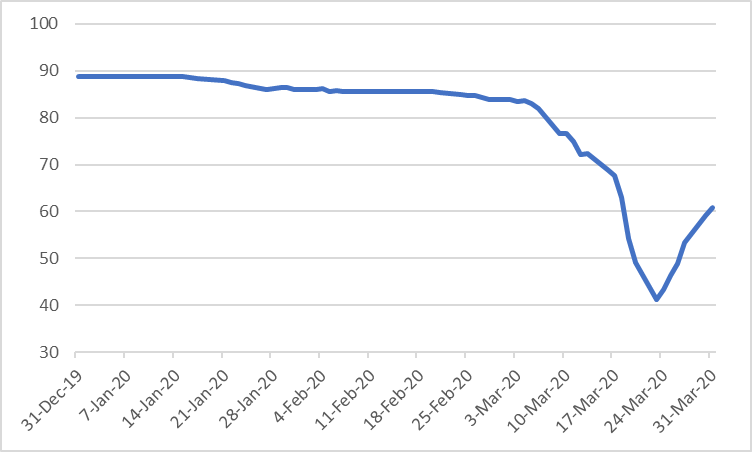 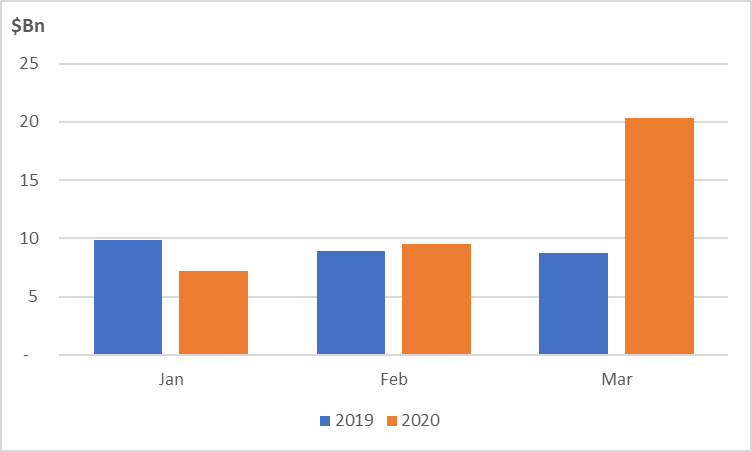 Following is a recap of derivative market volumes to occur in the quarter, while comparing volumes to the first quarter of the prior year to highlight how index product usage has changed in response to the COVID19 crisis. Here we highlight volume trends for key global tradable indices.

Total untranched CDS index trades across CDX and iTraxx Europe amounted to $6.9 trillion traded in the first quarter, which is 76% higher volume than the same point last year. 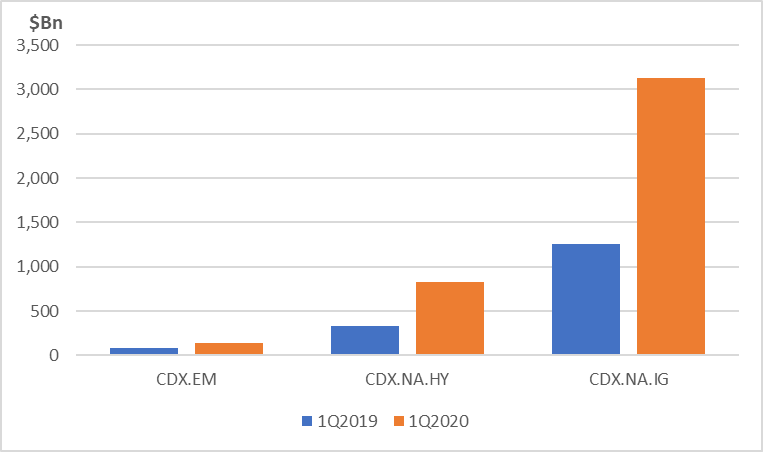 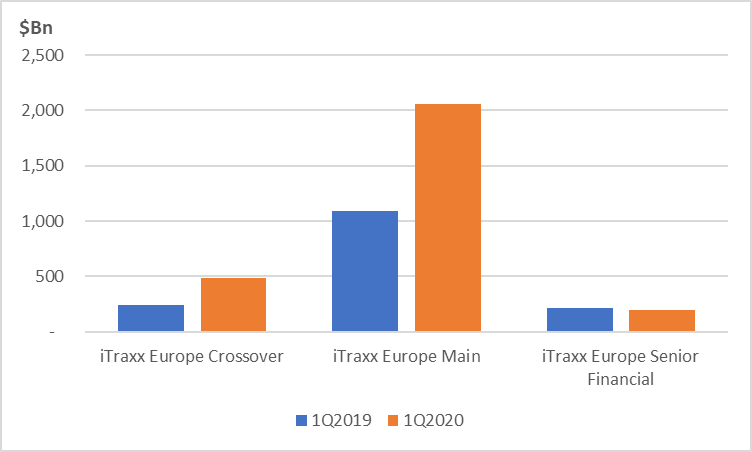 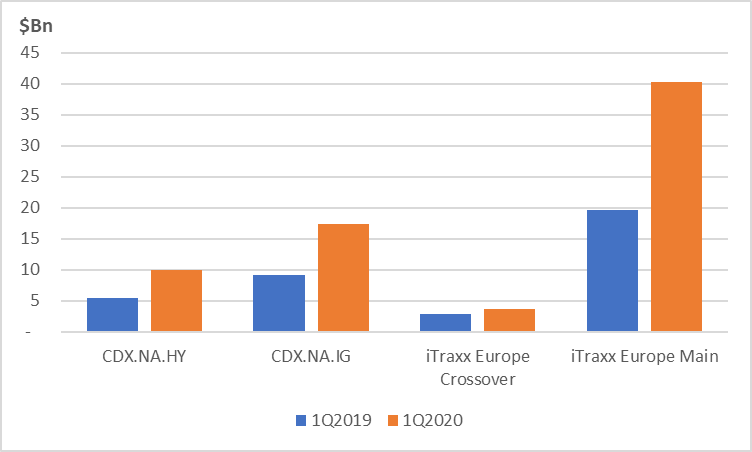 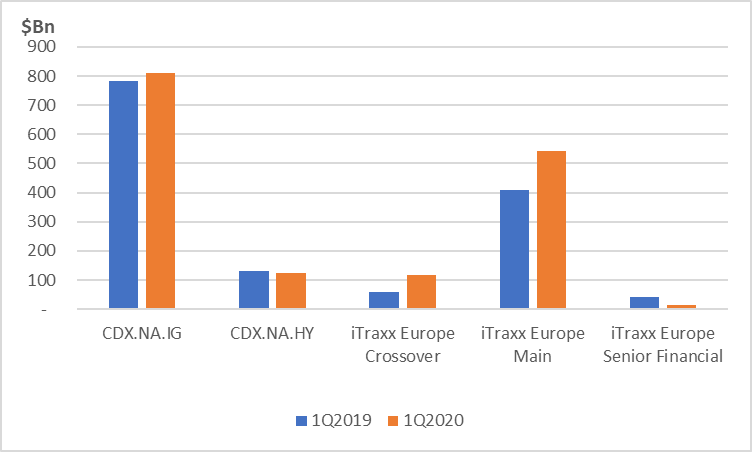 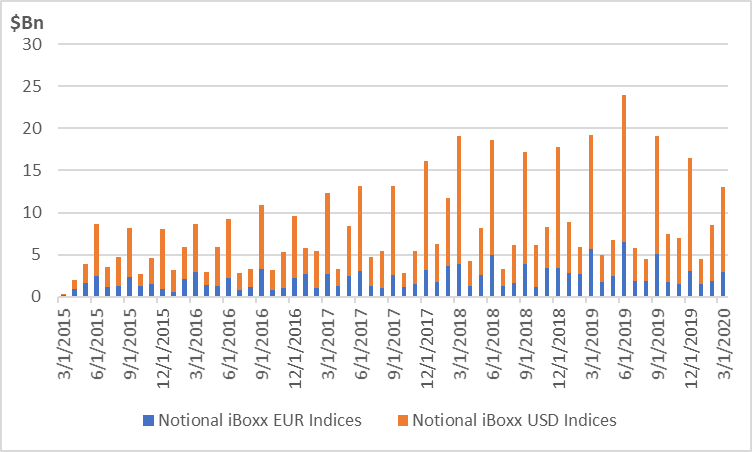 The Cboe iBoxx iShares $ High Yield Corporate Bond Index Futures ("IBHY"), the first-of-its-kind futures on the corporate bond market, saw record volumes in 1Q2020. IBHY, which only began trading in September 2018, traded more than $1.8 billion in March. IBHY volumes hit a daily high of $244 million on March 17 and averaged $84 million traded per day during the month. 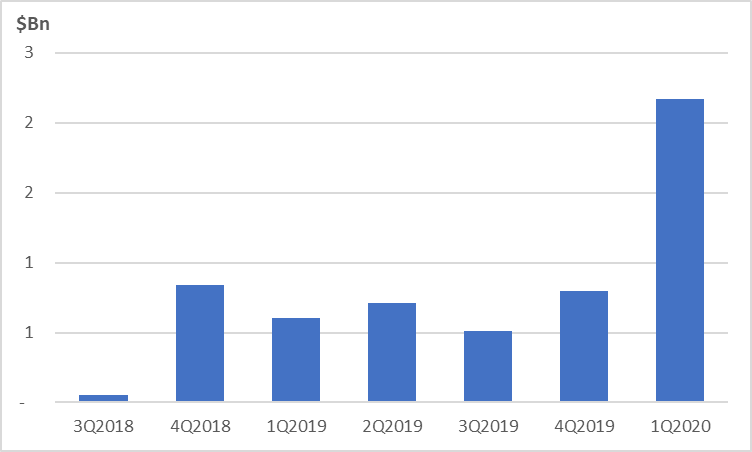 The first quarter has been an unprecedented challenge for markets, not to mention the disruption that has occurred to the lives of everyone on the planet. As index providers, we were confronted with market conditions that called for unprecedented consideration. Our primary concern is to ensure our tradable indices accurately reflect the investible market segments they are meant to track.

Our CDS indices rolled into new series towards the end of March, a semi-annual event that results in significant market activity as investors often roll their positions into the on-the-run indices. At nearly the same time, all our iBoxx indices were set to rebalance at the March month end, as they do every month end.

We considered delaying the roll of the CDS indices and the rebalancing of our iBoxx indices to account for the operational risks for a financial workforce transitioning to working from home and give n concerns to underlying market conditions.

We ended up taking a differentiated approach between the two index franchises. We rolled the CDS indices as usual, bolstered by what we observed to be healthy functioning markets that were notching record high volumes. The roll proceeded without any issue.

For our iBoxx indices, we decided to perform a partial rebalancing. For the iBoxx indices, the majority of what we heard from the market was concern about the ability and cost to transact in distressed cash bond markets. This meant that name changes in the index due to rating, classification and amount outstanding changes, among other changes, would be postponed until the April 30 rebalancing. The result would be that users of the indices would not be forced to transact in underlying bonds that would be near impossible to find a market in, or to do so would result in high costs due to issues with the market structure. Other fixed income index providers largely followed suite and feedback from the industry has confirmed that this was the correct decision.

The broad feedback we received from the market for these two index families helped inform our decisions for how best to carry the indices forward. The fact that we have highly engaged advisory committees made up of leading experts from amongst our clients helped us steward the ship during these extraordinary times, and for that, we thank you.