December's preliminary PMI numbers provided a more solemn note to end the year, with growth momentum across the world's largest developed economies revealed to have eased in the final month of the year. That said, overall manufacturing output rose, supported by an easing of supply constraints across Western economies, which also suggested that we may be seeing prices peaking in these regions.

Flash PMI surveys for December signalled a slowdown in the pace of economic growth in all four of the world's largest developed economies. While still solid, the weighted average PMI output index for the US, Eurozone, Japan and UK stood at 54.7 compared to 55.9 in November, signalling the slowest growth recorded since September. Economic growth was weighed down primarily by slower service sector activity growth, though manufacturing growth also remained subdued relative to the strong gains seen earlier in the year. 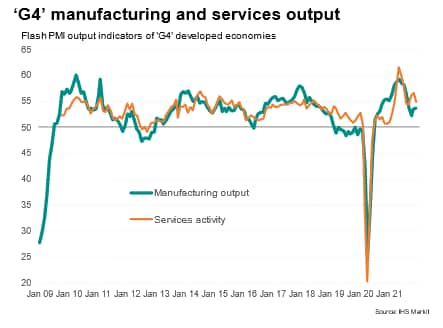 A renewal of COVID-19 case growth in Western economies into the closing months of 2021 has affected service sector activity in December, with the European economies in particular finding their latest flash composite PMIs sliding further from their summer peaks, reached as the economies opened up from pandemic-related restrictions.

Eurozone growth notably fell to a nine-month low in December with the German economy stalling for the first time in a year-and-a-half (See: "Eurozone growth at nine-month low in December as fourth COVID-19 wave hits, price pressures and supply constraints ease"). UK growth likewise slumped to the slowest since the lockdowns at the start of the year. 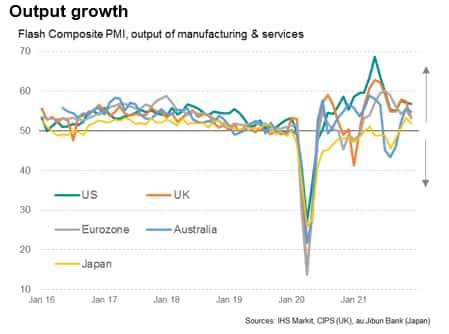 While the surge in cases remain a Delta-variant-driven phenomenon, the spread of the Omicron variant has induced additional caution and poses an increased threat to the growth outlook. The December surveys showed demand growth across the UK and eurozone easing to the slowest recorded since February and March respectively, which was when COVID-19 disruptions first started easing towards the start of this year, with weakness led by renewed falls in activity in consumer-facing sectors such as recreation and tourism. 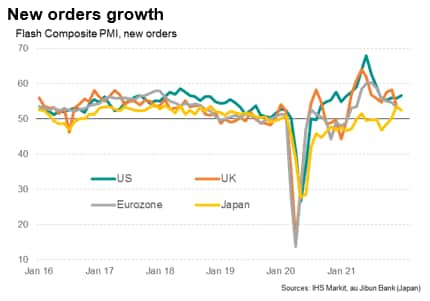 A more modest easing in output growth was seen in the US, which even recorded a faster rate of new orders growth in December, largely reflecting lower virus containment measures than seen in Europe. The rate of expansion nonetheless slipped in the US to the weakest for three months.

Meanwhile, APAC economies including Japan and Australia had similarly seen private sector output growth slow from November. The difference to note, however, had been the fact that both countries only recently saw their output growth revive as the Delta wave eased and the economies reopened. This suggests that we may be seeing a recent peak in output growth following the latest reopening boost, while the supply-demand mismatch continue to pose challenges for the supply chain and price inflation in the near to medium term. 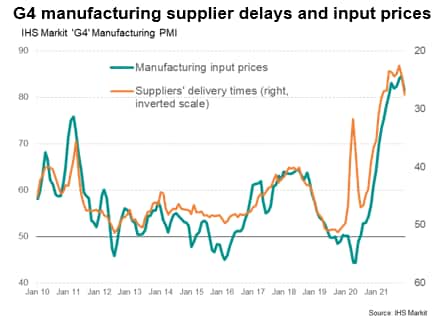 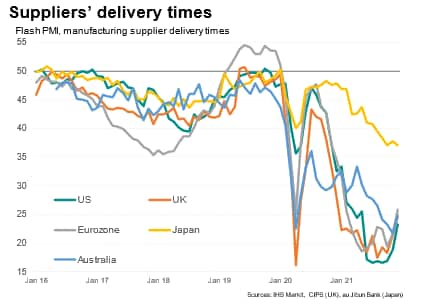 Suppliers' delivery times continued to lengthen at a severe rate in December but eased off the November record to the lowest since August, suggesting that we be seeing a turnaround in the situation. The dip had been underpinned by a slower increase in supplier lead times across all but Japan within the G4 economies. The US, UK and eurozone all saw sharp easings in the rate at which lead times lengthened, with UK delivery times extending at the slowest pace since December 2020 and the eurozone reporting the fewest delays since January. US lead times meanwhile lengthened to the least extent since May.

An easing of previously reported COVID-19 related production issues in Asia is likely to have ameliorated the global supply situation, although the COVID-19 Omicron variant's reach into APAC economies continue to cloud the outlook going forward.

Looking at the details, however, the UK and eurozone saw slower overall rates of input cost increase amid the decline in supplier delays, hinting at the easing of inflationary pressures ahead.

Conversely, the US and Japan continued to experience higher price pressures, with the US service sector facing unprecedented cost inflation in December. This is expected to continue garnering the Fed's attention following their December FOMC update, with three rate hikes now forecast for 2022.

In Japan and Australia's cases, higher costs were recorded while growth momentum eased, though this was largely consistent with the reopening trends witnessed in other episodes where COVID-19 waves receded and may not garner as much concern yet. 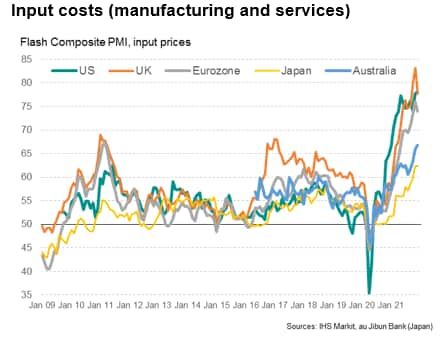 The latest set of G4 flash PMI data for December outlined the easing of growth momentum across the board. To a large extent, lingering COVID-19 disruptions can be held accountable for the slower rise in private sector activity in the final month of the year. That said, an easing of supply constraints in the Western economies has been a promising sign as the global economy journey on in the adjustment of COVID-19 from pandemic to endemic status, and we will be tracking this trend of easing supply constraints closely to observe for continuity.

Business confidence diverged in December, however, with expectations for future output sliding in UK and Japan while the US and eurozone saw better optimism for the year ahead. Renewed COVID-19 concerns amid the Omicron variant's threat to the UK economy and further worries of supply chain issues in Japan weighed on business confidence.

On the other hand, US firms held a more upbeat view, with beliefs that the Omicron variant may be less severe than prior waves. This had been largely congruent with the virus case counts across the various countries. Further clarity on the Omicron variant's impact and corresponding vaccine responses by authorities are nevertheless expected to play their parts in guiding expectations going forward. 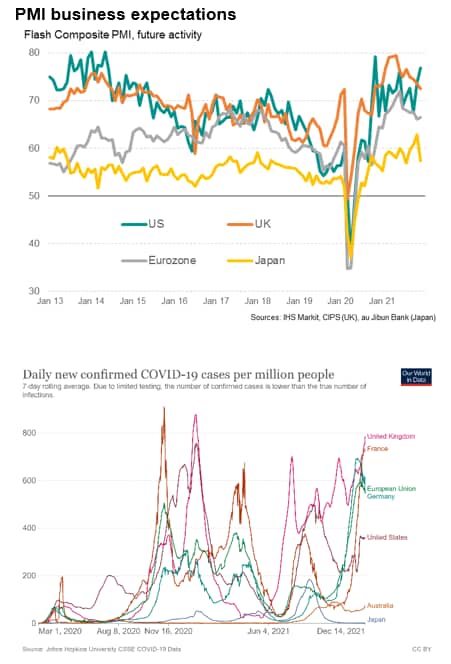