Today sees our latest nowcast update following the release of our February PMI figures. Overall there is little meaningful change to the model updates, with nowcasts mostly holding their ground from last week's levels.

An exception is Germany, where PMI numbers, particularly on the manufacturing side, continue to underwhelm.

Of note, German manufacturing exports fell during February at a marked and accelerated rate, whilst there was clear evidence of supply-chain disruption stemming from the COVID-19 related shutdowns in China (average lead times for the delivery of inputs to manufacturers deteriorated for the first time in over a year during February).

Subsequently, the German nowcast for Q1 GDP has been revised a little lower to -0.17%, from a previous estimate of -0.14%. Whilst we believe that official GDP growth in the first quarter will surely benefit from compensating rebounds in both industrial production and retail sales, which were driven markedly lower in December due to calendar-related distortions, the latest nowcast and PMI figures reinforce our view that the underlying performance of the German economy remains weak.

Elsewhere, France sees no change to its growth estimate (+0.08%). Whilst the manufacturing economy has slipped back into negative territory, afflicted by various issues in transport-related sectors and global supply chain challenges, services enjoyed a decent February with growth picking up to a four-month high.

With a reversal of the negative inventory drag of the fourth quarter already set to support a technical rebound of growth in the first three months of the year, expect France to provide the main support to overall euro wide performance during Q1.

However, this may prove insufficiently strong to completely offset the ongoing weaknesses in Germany and neighbouring Italy, which remains on course for technical recession based on the current data flow.

Subsequently, our latest estimate for the euro zone remains unchanged and indicative of broad stagnation in the first quarter (nowcast: -0.04%).

Finally, our UK Q1 GDP nowcast is again unchanged at a modest growth level of +0.23%q/q. Whilst the UK's manufacturing economy somewhat bucked the wider trend, expanding at its highest rate for 10 months, a softening in service sector expansion and evidence of supply chain bottlenecks owing to COVID-19 provide some downside risks to near-term growth. 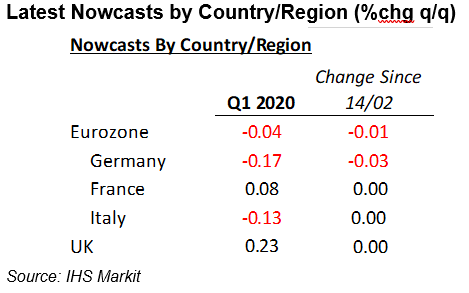