Following the release of record-low PMI figures today, the latest dynamic factor-based models for the euro zone and the UK unsurprisingly clearly point to a sharp deterioration in economic conditions during the opening quarter of 2020.

Our model-based estimates now show quarterly contractions of approximately -0.1% for both the euro zone and the UK. These are markedly lower than their respective nowcast highs seen through the current cycle, around 0.2 percentage points lower for the euro area and 0.3 percentage points for the UK. However, with the clearly considerable impact of COVID-19 in mind, some important points to note with the latest nowcasts.

We recognise that, on balance, the dynamic factor models are likely underestimating the current rate of contraction.

It is well known that such models tend to be sluggish in adjusting to rapid and volatile changes in the economic environment. This reflects the data intensive nature of a factor model, which takes a range of information from across many data sources, a notable proportion of which is inherently backward looking when provided by official statistics offices (think industrial production, trade and retail sales figures for example).

Whilst such official data sources play a crucial role in the dynamic factor model - adding considerable quantitative meat to the directional signals provided from softer indicators to enable them, on average, to provide the best estimates of European growth developments - there is inevitably a time lag (or "catch-up") in performance compared against the more "low-tech" solutions that are based purely on the timeliest and earliest economic indicators. 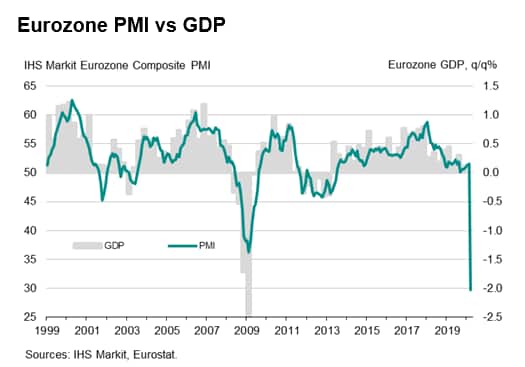 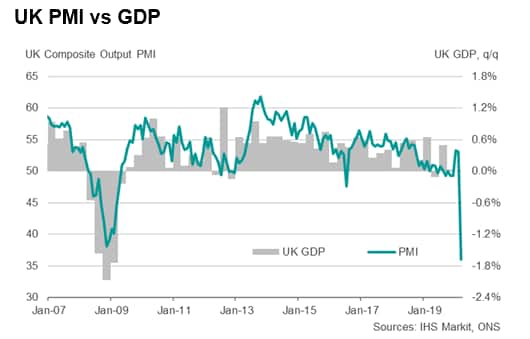 In other words, it's really a matter of timing and the available information to hand when volatility and uncertainty abound. Given the sheer scale of the declines in output that are likely to be occurring in March, a simple PMI-based model tends to be better equipped at offering a baseline estimate of changes in GDP.

For the Eurozone, the average Output PMI level of 44.2 over Q1 already suggests a quarterly fall in GDP in excess of -1.0%. For the UK, an average reading of 47.4 over the first quarter points to a fall in GDP of at least -0.3%.

However, there is obviously a great degree of uncertainty at this juncture, and it is perhaps worth noting that PMIs are already at or close to record lows for March alone and implying rates of decline in GDP greater than anything we saw during the height of the financial crisis.

Indeed, the March PMI record low of 29.7 for the eurozone is already consummate with GDP declining at a quarterly rate in excess of the -2.0% mark (with Germany tracking at slower rate of decline, and France deteriorating faster).

However, Italy has, by some margin, recorded the most significant economic shock in March. The Composite Output PMI here fell by 30.5 points to signal the extremity of the current situation. Such a considerable and deep fall in economic activity in such a short period can be difficult to quantify, but March PMI data alone are consistent with a quarterly contraction of somewhere between 2.5 to 3.0%.

Finally, the UK's PMI of 36.0 likely signals a decline of somewhere between 1.5% to 2.0% in GDP heading into the second quarter.