Today's flash August PMI data for the euro area provide a timely opportunity to update our nowcasting models for the third quarter of 2019.

PMI data generally came in a little firmer-than-expected when compared to model predictions, the net effect being slightly firmer nowcasts for the euro area, Germany and France when compared to last week.

There nonetheless remains notable divergences across the region, with Germany (-0.21%) still expected to record a contraction in economic output, compared to solid growth seen in France (+0.31%).

Differences continue to primarily reflect relative exposures to global trade flows, with German manufacturers enduring another torrid month in terms of output and order books according to the August PMI figures. Notably, German flash PMI data provide signs of spillover into domestic markets: although the services sector continued to record solid growth, this was achieved via a solid reduction in backlogs of work as new business growth hit its lowest level since the start of the year. Moreover, overall business expectations for the next year have turned negative for the first time since October 2014. Whilst we await official production data for July (available mid-September) for greater clarity, our modelling continues to suggest Germany is in technical recession.

Based on the current newsflow, euro area growth is subsequently likely to be minimal at best in the third quarter - just +0.06%, according to the latest estimate, a slight improvement on last week's +0.04% q/q.

With little in the way of new data available for Italy, the third quarter nowcast remains unmoved at -0.04% q/q. Given recent political developments, interest will surely be raised for the August PMI data due for release at the start of September.

Finally, there is little cheer over in the UK, with growth here also forecast to be minimal at just +0.07% q/q. Given the recent gyrations in the official GDP data following the build-up - and then unwinding - of stocks in the first half of the year due to the proposed departure from the EU in March, nowcast uncertainty nonetheless remains elevated. 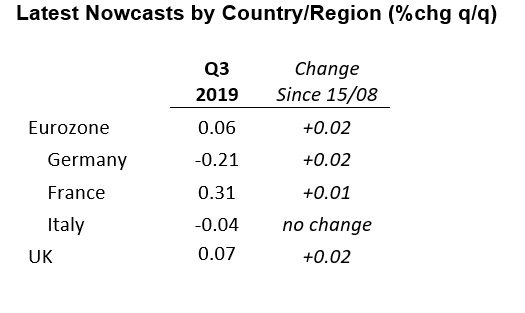