Major global equity and credit markets closed higher across most of the world, with the Nasdaq -0.5% standing out as the only major equity index not taking part in the rally. The US dollar was weaker on the day, as some of the recent flight to safety has subsided with the $2 trillion US stimulus package coming closer to passage by Congress. All eyes will be focused again on tomorrow's 8:30am ET weekly US Unemployment Insurance Weekly Claims Report's Initial Claims to better quantify the COVID-19 pandemic's impact on US employment.

2. The late sell-off in US equities was preceded by a few minutes with a sudden 2bp rally in 10yr US govt bonds at approximately 3:38pm ET and then a 3bp sell-off almost immediately afterwards.

3. IHS Markit's Vice Chairman Dan Yergin and Head of Energy Financial Markets Strategy Roger Diwan published an article in The Washington Post yesterday entitled "How to stop the tsunami of surplus oil that's about to slam the global economy". The article highlights the fact that the coming days are crucial for how the crisis plays out for the oil sector, which has been slammed by both the economic shutdown and a supply war. IHS Markit estimates that the drop in consumption could range from 10 million to 15 million barrels per day in the next four to eight weeks — or up to 15 percent of global demand. That would be a staggering, never-seen-before decline. The market could not even begin to cope with a surplus of that magnitude. In a matter of weeks, oil inventories could swell to a size triple those built up during the 2014-2016 price collapse. Already-low prices would drop further, prompting companies to shut production wells and pull back on investment. They argue that a global initiative within the G-20 - currently headed by Saudi Arabia - is the best way forward to address this market imbalance and avoid an unmanaged unravelling.

5. Yesterday's 11.4% DJIA close was actually the highest single day performance since 1933 (not 1993, as originally published).

6. It's interesting to note that IHS Markit's ETF flow of funds data indicates that yesterday is the second time over the past four weeks when a rally in the S&P 500 (light blue line) coincided with a net outflow across the ETFs that track the index. 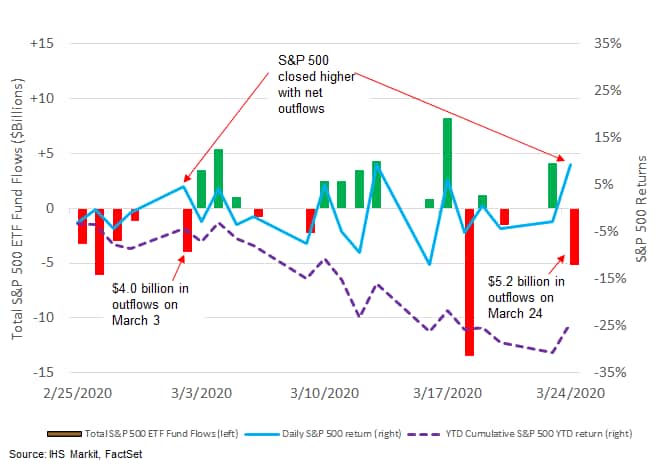 8. On 23 March, Ecuador's EMBI+ spread surged by 2,415 basis points to 6,063 basis points, surpassing the level reached in 2008 when Ecuador declared selective default. This was triggered by a statement by the Minister of Finance Richard Martínez that Ecuador planned to defer some USD200 million of interest payments on its 2022 and 2030 bonds due imminently, although it pledged to pay the USD324 million of principal due on its 2020 issue that matured on 24 March. (IHS Markit Economists Thea Fourie and Brian Lawson)

9. IHS Markit's CDS data indicates that the cost to insure Ecuador's bonds against default has increased significantly from an upfront payment of 16.4 points (% of amount being insured) on 2 January to 69.8 points as of yesterday's close (both are in addition to a 500bp fee per annum). Ecuador's finances have been hit hard by the sharp decline in oil prices. 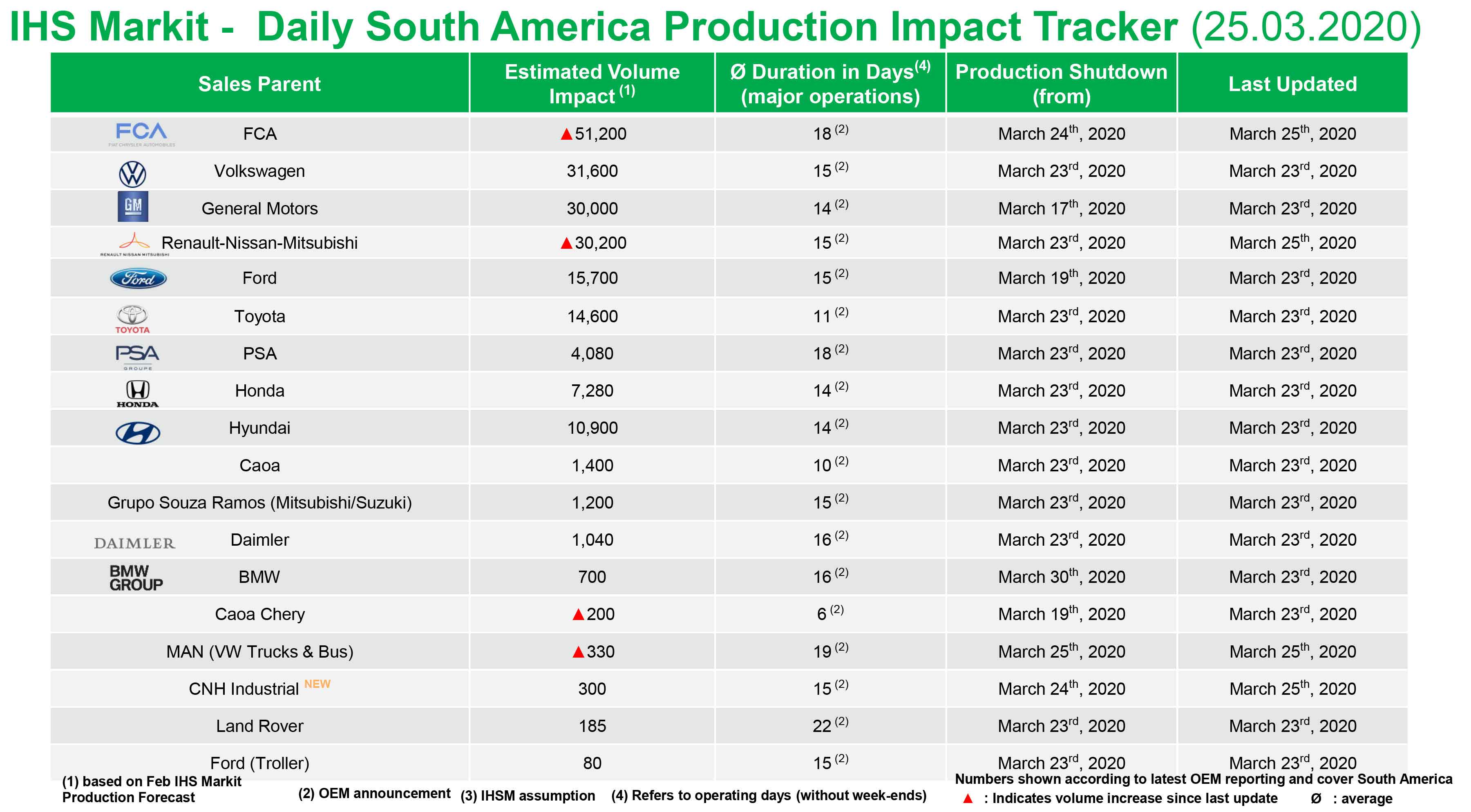 12. GM meanwhile said yesterday that it is planning a drawdown of about USD16 billion from its revolving credit facilities, to "preserve financial flexibility" and supplement its existing cash position of USD15 billion. CEO and chairman Mary Barra said in a statement, "We are aggressively pursuing austerity measures to preserve cash and are taking necessary steps in this changing and uncertain environment to manage our liquidity, ensure the ongoing viability of our operations and protect our customers and stakeholders. (IHS Markit's Stephanie Brinley)

12. According to a report published by Methodical Management, market capitalization for the 44 mortgage REITs (mREIT) has fallen from $90 billion on 21 February to $33 billion as of 23 March. There had recently been discussion that common dividends are at risk, but it appears that preferred dividends are also potentially at risk, which could lead to the liquidating of assets and winding down operations. To put this into context, none of the mortgage REITs cut preferred dividends in the 2008 downturn. As of 23 March, at least three REITs have publicly disclosed a renegotiating of liabilities or action on their dividends. IHS Markit's Dividend forecasting analysts indicate that the mREITs sector is currently under distress due to margin calls, as they purchase securities on margin to increase returns. Given that the prices of mortgage bonds and other securities have been falling over the past month, the companies have been confronted with margin calls from lenders.

1. Yesterday's UK 'flash' purchasing managers' index (PMI) survey for March showed that consumer facing service sectors are already suffering, with the steepest fall in activity during any month since the survey began in 1996. It points to severe GDP losses in March and the prospect of a sharp contraction during the second quarter of 2020. IHS Markit now anticipates a more severe fall in GDP in 2020 in the next forecast update, which will be published in the next few days, with its current estimate of a 0.7% contraction overtaken by events, namely the government embracing more serious anti-contagion measures. (IHS Markit Economist Raj Badiani) 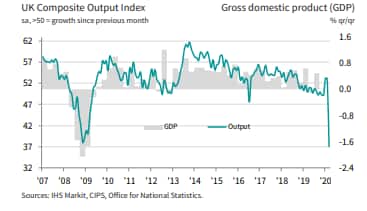 2. A large bounce in Austrian industrial production signals that the economy had started to rebound before COVID-19 virus crisis. Austrian industrial production (including construction) rebounded sharply by 4.2% month on month (m/m) in seasonally adjusted, European Union (EU)-harmonized terms in January 2020. In addition, the monthly change for December 2019 was revised up markedly from -1.7% to -0.2%. (IHS Markit Economist Timo Klein)

3. Ireland's government announced yesterday 24 March that the COVID-19 Pandemic Unemployment Scheme and Illness Benefit were increased to EUR350 per week. The government also introduced a temporary wage subsidy of 70% of take-home pay up to a maximum weekly tax-free amount of EUR410 per week (70% of gross annual income of EUR38,000) to help affected companies to keep paying their employees. The total cost of the income-support schemes is estimated at EUR3.7 billion over 12 weeks. However, this estimate is subject to significant uncertainty. (IHS Markit Economist Daniel Kral)

4. The most active sovereign bond issuers in Africa over the last decade have been South Africa, Ghana, Nigeria, Kenya, and Angola. Of these, IHS Markit economics highlights Nigeria as facing particularly severe pressure at present. In the week of 16 March, the country had 50 oil cargoes stranded at sea without buyers. Nigeria runs a managed floating exchange rate and consumed USD2.9 billion of reserves during 2020 to uphold the peg, before devaluing the naira by 15% last week. Further devaluation is likely. Nigeria also has external debt maturing this year. However, Nigeria's external debt as a percentage of GDP is modest versus other African countries. (IHS Markit Economists Thea Fourie and Brian Lawson)

1. Prime Minister Narendra Modi of India has announced a nationwide lockdown across India for 21 days starting on 25 March to mitigate the spread of the coronavirus disease 2019 (COVID-19) virus. This effectively halts all business activity in most sectors, with exceptions for essential services: these will include banks, insurance, telecoms and information technology, manufacturing of protective equipment, and capital and debt services. Disagreements with states over the extent and operational management of the lockdown could encourage the central government to impose a national emergency taking direct control of the lockdown. (IHS Markit Economist Deepa Kumar)

2. According to a 24 March article in the New York Times, what appeared to be the most effective tactic in slowing the spread of COVID-19 in Wuhan was a shift after 2 February to a more aggressive and systematic quarantine regime whereby suspected or mild cases—and even healthy close contacts of confirmed cases—were sent to makeshift hospitals and temporary quarantine centers. It included accelerating the testing process from 200 tests a day in late January to 7,000 daily by mid-February, and turning hundreds of hotels, schools and other places into quarantine centers, as well as building two new hospitals and creating 14 temporary ones in public buildings.

3. Retailers are suspending and canceling clothing orders, threatening millions of factory jobs in Asia just as China shows signs of recovering from the worst of the coronavirus outbreak. (WSJ)

4. Japanese Prime Minister Shinzō Abe announced on 24 March that the Tokyo 2020 Olympics and Paralympic Games will be delayed "for about one year" because of the coronavirus disease 2019 (COVID-19) virus pandemic. The postponement is likely to trim 0.3-0.4 percentage points from Japan's 2020 real GDP growth. Consequently, Abe's administration will be deprived of opportunities to lift consumer and business sentiment, and the postponement lowers the probability of a quick recovery (or even the continuation of operations) for small and medium-sized enterprises (SMEs). (IHS Markit Economists Harumi Taguchi and Alison Evans)

The last trading day of one of the most volatile quarters in both the debt and equity markets on record was incongr… https://t.co/wim2PBrDrc

US stocks emerged out of the shortest bear market in history last week with three consecutive days of gains. Given… https://t.co/zqEyB7QnBz