A relatively calm start to the day, as volatility had been relatively subdued until midday New York time. However, that changed during the second half of the day, as today was a quadruple witching day when equity index futures, equity index options, equity options, and single stock futures expire simultaneously, which often coincides with higher trading volumes and heightened market volatility.

1. Governments across the US continued to ratchet up measures to combat the COVID-19 outbreak. California ordered the state's residents to shelter in their homes, except for essential activities, and New York announced around 11:30am ET that it was ordering residents to stay indoors "to the greatest extent" and is requiring all nonessential workforce employees to stay home. (WSJ)

2. The S&P 500 peaked in positive territory for a brief period of time around 11:00am ET, which was shortly before New York's announcement, and then gradually sold off for the remainder of the day, to close at -4.3.

3. Today's intraday CDX NA-HY activity indicated a steady sell-off in credit throughout the day to end the week at a new multiyear high intraday bid spread of 870bps, which is near levels last seen during the summer of 2009:

4. 10yr US govt bonds closed significantly higher -28bps/0.87%, which is likely at least partially explained by news reports that the Fed was executing over $100 billion in US Treasury purchases yesterday and today.

5. The FT reported yesterday that there was a record of over $109 billion in outflows from global bond mutual funds and ETFs during the week preceding March 18, citing EPFR data. IHS Markit's Exchange Traded Products (ETP) data shows over $38 billion has flowed out of global bond ETFs since March 6. The first major wave of outflows (left axis/bars) appears to have coincided with the sell-off in 10yr US government bonds (right axis/line) that began March 10. 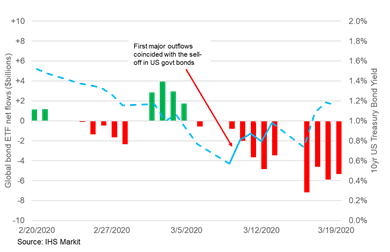 6. An analysis released by IHS Markit's Dividend Forecasting group today indicates there is still some support from banks to keep paying dividends, albeit at a lower level for some of them. The banks have much stronger capital ratios than they had prior to 2008. We believe larger banks will be able to support the significant credit line drawdowns in industries most negatively affected by the spread of COVID-19: Technology, Oil & Gas, Travel & Leisure and Retail. Generally, regional banks are more sensitive to the deteriorating economic environment and lower rates.

7. The Federal Reserve announced today that it would extend its asset purchase program into short-term municipal bonds. (WSJ)

8. WTI Crude oil closed down more than -10% today after a sudden sell-off around 2:30pm amid a flurry of reports that US officials are in discussions with Saudi Arabia about a coordinated supply cut.

9. Absent a coordinated supply response, oil prices might have to fall low enough to force existing production around the world to be shut in, including in the US. The question is how low that is. According to the research piece published today by IHS Markit's Raoul LeBlanc entitled "Not so fast: US producers will resist shutting in wells", for well shut-ins to make economic sense, prices need to fall below variable operating costs, not just total operating costs. The bottom line, oil prices would likely have to fall into single digits for an extended period of time to induce wide spread shut ins of existing US production.

10. Mexico's Ministry of Health confirmed yesterday a total of 164 COVID-19 cases. The country faces an uphill challenge to deal with the virus. It has 1.5 hospital beds per 1,000 people, compared with 3.4 in Italy. After shrinking by 0.1% in 2019, IHS Markit now forecasts Mexican GDP to decline by 1.8% in 2020, with scope for further downside adjustments. Economic recession in the United States will significantly curtail foreign-exchange earnings (about 80% of Mexican exports are US bound). (IHS Markit Economist Rafael Amiel)

12. The most dramatic move in Emerging markets this week was for Venezuela after the Maduro administration's application to the International Monetary Fund (IMF) was rejected: Venezuela's EMBI+ spread rose 2,688 basis points on the day to 15,234bps (implying an average yield of 152% on its bonds). Despite the severity of the move and the huge capital discounts such yields imply, they still fall short of the 206% yield shown by Venezuela's EMBI index in late 2019. (IHS Markit's Brian Lawson)

13. Ford Motor Company has notified its lenders that it will borrow USD15.4 billion, against two lines of credit: USD13.4 billion (from its corporate credit facility) and USD2 billion (from its supplemental credit facility). At its US dealerships, it is offering six months of payment relief for new-car buyers who finance their purchases through Ford Credit under the company's new 'Built to Lend a Hand' program. Ford will pay for three months and customers can defer payments for up to three months, making it a total six months of deferral. The program is applicable to customers purchasing 2019 and 2020 model-year vehicles (excluding 2020 Super Duty trucks). (IHS Markit's Tarun Thakur)

1. The Bank of England's Monetary Policy Committee (MPC) held a second emergency meeting in a week, where it voted unanimously for a raft of new monetary measures to support the UK economy amid COVID-19 virus. They cut the policy rate from 0.25% to a 325-year low of 0.1% after a 50-basis point cut to 0.25% in the first emergency meeting and announced plans for additional QE by increasing its holdings of UK government and corporate bonds by GBP200 billion to GBP635 billion, to be financed by printing money. (IHS Markit Economist Raj Badiani)

2. The escalation of the COVID-19 outbreak across Europe in February and March, and the temporary closure of factories are putting production across the automotive industry under strain. Growing numbers of producers are stating that over the coming weeks raw material shortages and supply chain disruptions will become increasingly apparent and likely affect production. In addition to the supply-chain constraints, demand conditions are now also worsening (IHS Markit Economist Sian Jones) 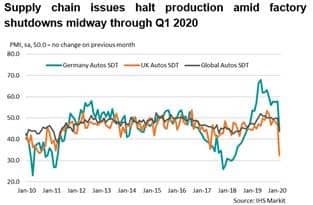 1. Taiwan's central bank has reduced its policy rates for the first time in four years, with the rates reaching the lowest level on record. In addition, the central bank has said it will provide additional funds of TWD200 billion (USD7 billion) to banks in support of business operations and to ensure sufficient liquidity in the financial system. IHS Markit assesses that further monetary easing by the central bank, including additional policy rate reduction, could be possible to help stabilize financial markets and support domestic sentiment. (IHS Markit Economist Ling-Wei Chung)

2. After suspending trading activities in the Philippines for two days in compliance with quarantine measures, the local stock market reopened on March 19. However, the suspension failed to prevent panic selling by investors as COVID-19-related fears and the economic outlook spooked global and local financial markets. On March 19, the Philippine Stock Exchange index tumbled as much as 24.3% in mid-day, before closing at 4,632.4, marking a 13.3% drop from the previous trading day and reaching an eight-year low. (IHS Markit Economist Ling-Wei Chung)

The last trading day of one of the most volatile quarters in both the debt and equity markets on record was incongr… https://t.co/wim2PBrDrc

US stocks emerged out of the shortest bear market in history last week with three consecutive days of gains. Given… https://t.co/zqEyB7QnBz