1. Initial claims for US unemployment insurance jumped by 70,000 to 281,000 in the week ended 14 March, its highest level since September 2, 2017. With this spike in claims we are seeing the first signs of layoffs across the country as COVID-19 roils the economy. (IHS Markit Economist Akshat Goel) 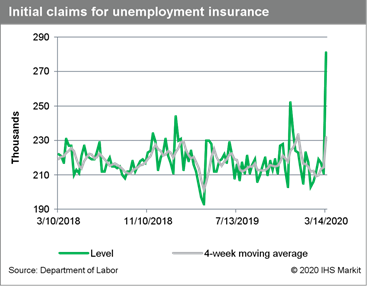 2. The recent surge in layoffs across the US has created an influx of applicants into unemployment offices, which is beginning to strain systems. In Ohio, the Department of Job and Family Services said 36,645 claims were filed Monday. That's typically what the department receives each month. (Yahoo News / The Columbus Dispatch)

3. USD continues to increase rapidly versus other major currencies, increasing over 7% since March 9.

4. The Federal Reserve announced today the establishment of temporary U.S. dollar liquidity arrangements (swap lines) in amounts up to $60 billion each for the Reserve Bank of Australia, the Banco Central do Brasil, the Bank of Korea, the Banco de Mexico, the Monetary Authority of Singapore, and the Sveriges Riksbank and $30 billion each for the Danmarks Nationalbank, the Norges Bank, and the Reserve Bank of New Zealand. These U.S. dollar liquidity arrangements will be in place for at least six months. (Federal Reserve)

5. Preliminary data released by the Central Bank of Chile indicates a significant 2.1% annual decline during the fourth quarter of 2019 as periods of social unrest and protests halted private consumption of services such as education and transportation while also spurring a decline in government spending. Inflation could either be pushed upward from the depreciation of the Chilean peso, or be pushed back down due to lower energy prices and very weak domestic demand, ultimately we forecast elevated inflation for the remainder of 2020. (IHS Markit Economist Ellie Vorhaben)

6. Brazil's Lower House on 18 March approved a 'state-of-emergency' bill that was proposed by President Jair Bolsonaro's government to deal with the COVID-19 virus pandemic. The Senate will vote to approve the bill on 20 March. The emergency decree will exempt the federal government from a legal obligation to meet the primary fiscal-deficit target of USD31 billion for 2020, freeing up funds for the COVID-19 response. (IHS Markit Economist Carlos Calceido)

7. Several automakers in North America announced on 18 March that they will idle production in reaction to the COVID-19 virus outbreak. Although a few plants have reported employees who have tested positive for the COVID-19 virus, the majority have not. Automakers that made statements on 18 March include Fiat Chrysler Automobiles, Ford, General Motors, Honda, Hyundai, Nissan, and Toyota. (IHS Markit's Stephanie Brinley)

8. General Motors (GM) and Ford are reported to be exploring the potential of producing medical equipment in effort to help treat the COVID-19 virus. According to Reuters, both automakers confirmed the talks. This idea is also being explored by UK automakers, also at the government's request. (IHS Markit's Stephanie Brinley)

9. Crude oil +25.5% / $25.45 per barrel as of 3:52pm ET Here is an interesting chart that we produced today using bond price price/yield data from the IHS Markit iBoxx Liquid High Yield Energy Index that compares 2020 average bond yields by rating/subsector with the WTI prices. As expected, the disparity in yields between E&Ps and Oil Equipment & Services companies becomes even more apparent with the lower end of oil prices 1. Last night, the ECB unveiled a new €750 billion bond-buying program of public and private sector debt. The announcement of the program has had a mixed impact on the 10yr govt bonds of the major European economies, with a significant -50bp improvement in Italian bonds and to a lesser degree in the UK/France -8bps, while Germany is 2bps weaker.

2. 10yr Italian government bonds opened as high as - 76bps/1.53% yield versus yesterday's close of 2.29%, but have been gradually selling off over the course of today

3. Yesterday, March 18, the United Kingdom's pound sterling declined to its lowest level against the US dollar since 1985, after depreciating by a further 5% to stand at USD1.15 (see chart). The British pound is also notably weaker on a trade-weighted basis. Many traders assume that the UK economy is set for a prolonged period of pain, hit by the spreading lockdown of its economy to combat the COVID-19 virus and the still unsubstantiated risks of its departure from the EU's custom union and single market at the end of this year. (IHS Markit Economist Raj Badiani) 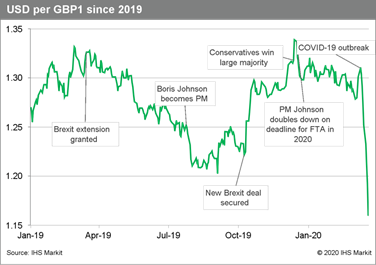 4. It is worth noting that GDP vs USD has recovered somewhat from today's record lows as of 12:43pm ET

1. In chemicals markets, Asian spot paraxylene prices are inching closer to an all-time low in the wake of the oil market crash and with downstream textiles demand outlook dimmed by the global spread of the coronavirus disease 2019 (COVID-19). The lowest PX price, at $572.50/mt, was recorded in late November 2008, during the global financial crisis, according to market sources (IHS Markit's Sok Peng Chua and Trisha Huang)

2. China raised its export value-added tax (VAT) rebate rate for 1,084 products from 10% to 13% and increased the rebate rate for 380 products from 6% to 9%, according to a circular issued by the State Administration of Taxation (SAT) on 17 March. The new rebate rate will be effective from 20 March. Authorities are trying to ease the export downturn as the global economy is heading to recession amid the coronavirus outbreak. China's exports in the first two months were down 17.2%, more significant than the drop at the beginning of the financial crisis and further downturn is expected in the second quarter. (IHS Markit Economist Yating Xu)

3. Japan's Consumer Price Index (CPI) for January fell by 0.1% from a month earlier on a seasonally adjusted basis. IHS Markit expects Japan's CPI to turn negative over the near term because outlooks for historically low oil prices and difficulties containing COVID-19 are likely to weigh on prices. (IHS Markit's Harumi Taguchi)