The Federal Reserve helped to provide some additional momentum for an already strong week in the US equity markets with the 8:30am ET announcement of new and expanded lending facilities, which coincided with report of another 6.6 million in new US jobless claims. Crude oil markets were particularly volatile again today after the announcement of a lower than expected OPEC/Russia production cut.

2. This morning the Federal Reserve announced additional actions to provide "up to $2.3 trillion" in loans. The announcement extended the central bank's support to credit provision into new sectors, including to state and local governments, and expands coverage in emergency lending facilities announced previously. (IHS Markit Economists Ken Matheny and Chris Varvares)

The following table provides further information about the programs referenced in today's announcement. 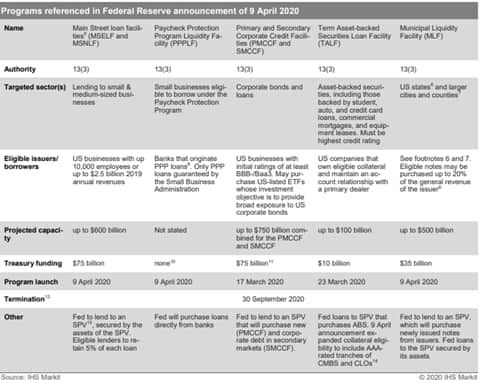 3. US initial claims for unemployment insurance decreased slightly to 6,606,000 in the week ended 4 April, only 261,000 below the prior week's all-time high of 6,867,000. This was the third straight week with claims in seven figures and illustrates the depth of the layoffs seen across the country due to coronavirus disease 2019 (COVID-19), as more than 315 million Americans have been advised or ordered to stay at home and businesses deemed "non-essential" have been shuttered. (IHS Markit Economist Akshat Goel)

4. The IHS Markit's CDX North American HY index reacted positively to the announcement of the new and expanded Fed lending facilities, tightening over 90bps over the 30min following the press release:

5. S&P futures also reacted positively on the news, increasing 2.1% from the time of the announcement to the US market open.

6. The University of Michigan Consumer Sentiment Index plunged 18.1 points (20.3%) in the preliminary April reading, to 71.0, the lowest since December 2011 and the largest one-month drop on record (since 1978). The index of buying conditions for large household durable goods plunged 59 points to 82. The index for homes tumbled 31 points to 102, while the index for vehicles fell 13 points to 117. For each of the former two measures, the early-April reading was the lowest since the early 1980s. (IHS Markit Economists David Deull and James Bohnaker)

7. OPEC and Russia agreed today to cut 10 million barrels a day of production, which is by far the biggest supply deal in history and equivalent to roughly 10% of pre-crisis demand. The cuts would diminish over time, ending in April 2022, according to the plan. (FT)

9. The US total producer price index (PPI) for final demand fell 0.2% in March, but the marks of distortions caused by the COVID-19 pandemic are all over the report. Goods prices fell 1.0%, paced by energy prices plunging 6.7%. Total services prices firmed 0.2% but both the devil and the disease were in the details: the next lower level of detail—for example, trade margins (up 1.4%), transportation and warehousing (down 3.3%), and "other" services (unchanged)—are slightly exaggerated but all over the map, as the pandemic hit sectors differently. (IHS Markit Economist Michael Montgomery)

11. The first full week of April saw an acceleration in the pace of rig drops, with operators dropping a total of 88 rigs from 2 April to 8 April, compared with a drop of 73 during the prior seven-day period. The cumulative drop since 13 March has reached 224, bringing the total active count to only 532. The last time the US rig count was below 600 rigs was in December 2016. With operators announcing actively shutting-in or choking back volumes in addition to dropping rigs, IHS Markit expects the industry has not yet hit the half-way mark of activity reduction (IHS Markit Energy Advisory's Raoul LeBlanc)

13. According to an analysis by the Financial Times, in the three weeks leading up to 24 March, over 130 US and European firms drew at least USD124 billion under bank facilities. (IHS Markit Economist Brian Lawson)

a. However, in the following week, Bloomberg reports that draw-downs had slowed with only USD45 billion of additional take-down.

c. Unsurprisingly, hotel chains such as Marriott and airlines (Delta, Southwest and Air France/KLM) are among other major users.

d. According to the Financial Times, at end-2019 JP Morgan had USD367 billion of undrawn corporate facilities outstanding, equivalent to 13% of its total balance sheet. The same sources reported that Bank of America, Citigroup and Wells Fargo had a combined USD1.2 trillion of standby arrangements at the time.

1. Eurogroup finance ministers have reached an agreement on an emergency rescue package aimed at responding to the economic pain triggered by the coronavirus crisis. The principal elements of the package include the preparation of European Stability Mechanism precautionary credit lines; a boost to the lending capacity of the European Investment Bank; and a new unemployment insurance scheme proposed by the European Commission. (FT)

a. There was unanimous agreement across the Governing Council that "bold and decisive action" was needed to counter the serious risks posed by the rapidly spreading COVID-19 virus for the monetary policy transmission mechanism, the outlook for the eurozone economy, and ultimately the ECB's price stability objective.

b. A "large majority" of Governing Council members supported the launch of a new Pandemic Emergency Purchase Programme (PEPP) for private- and public-sector securities with an envelope of EUR750 billion (USD820 billion) until the end of this year.

c. Reservations were also expressed by "some members" with regard to the proposed communication on the issue share and issuer limits: i.e. that the self-imposed limits might hamper ECB action that was needed to fulfil its mandate, implying that they would be revised "to the extent necessary".

3. The Italian government has approved a new emergency degree to provide additional liquidity and state guaranteed bank loans totaling EUR400 billion (USD432 billion) to assist companies struggling with parts of the economy being shutdown to combat the spread of COVID-19. Importantly, the Italian Treasury will protect banks from losses on 90% of loans to companies of all sizes. Furthermore, the guarantee can be extended to 100% of possible losses if the loans are EUR25,000 or less. (IHS Markit Economists Raj Badiani and Dijedon Imeri)

4. Poland's Monetary Policy Council (MPC) on 8 April cut interest rates by another 50 basis points, coinciding with the government's announcement of a second phase of the anti-crisis shield. Presently, IHS Markit assumes that interest rates will remain stable through the end of 2020, although further cuts cannot be ruled out, especially if the crisis drags on longer than currently expected and the current monetary and fiscal measures fail to halt the decline. (IHS Markit Economist Sharon Fisher)

5. The Volkswagen (VW) Group has said that it is beginning to slowly ramp up production at some of its main component facilities in Germany in preparation for a return to production in Europe and to support its Chinese operations, according to a company statement. (IHS Markit AutoIntelligence's Tim Urquhart)

6. The Russian light vehicle (LV) market posted a positive result, as the devaluation of the rouble spurred some buying activity, with a 4.0% year-on-year (y/y) increase in sales during March to 162,321 units according to the latest data release from the Association of European Businesses (AEB). This pushed the result for the first quarter of the year into positive territory, with the sales volumes for the first three months of the year rising by 1.8% y/y to 398,518 units. (IHS Markit AutoIntelligence's Tim Urquhart)

a. Large-scale debt forgiveness by China is unlikely but its constructive involvement in renegotiation and restructuring is highly probable. It would be domestically difficult for China to justify debt forgiveness for African states at a time of sharp economic slowdown, while setting an undesirable precedent for other debtor countries.

b. Chinese debt renegotiations are likely to be more onerous for borrowers of commodity-secured finance, especially Angola, which is the largest recipient of Chinese state-backed loans.

c. IHS Markit assesses that Ethiopia is a 'core' country for Chinese lenders and the most likely to receive greater flexibility in debt renegotiations for energy and transport infrastructure projects. 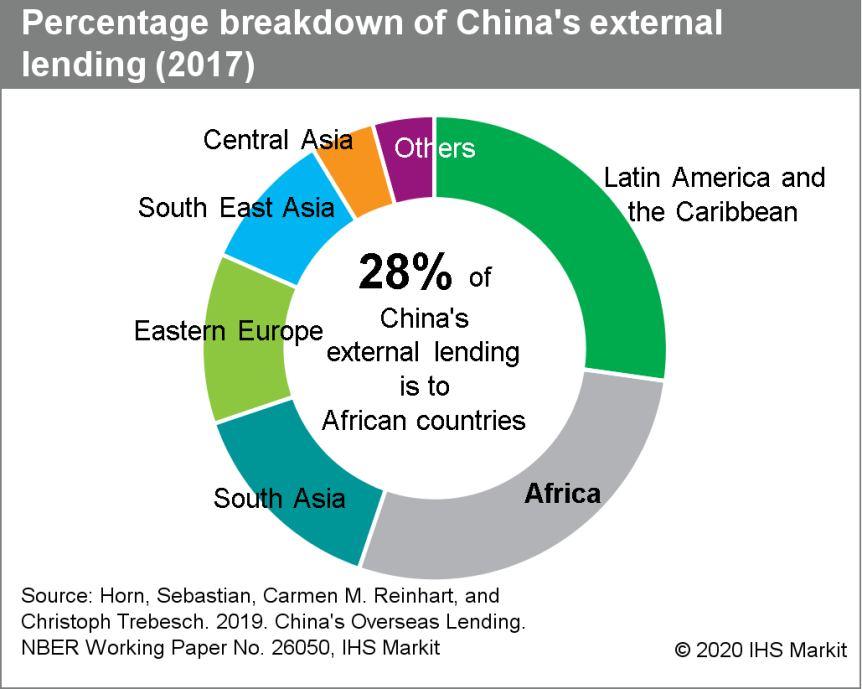 8. Lebanese authorities, in co-ordination with financial advisor Lazard, have developed a comprehensive plan to reform the financial sector, Reuters reports. Losses worth USD83.2 billion (LBP125,424 billion) are expected for the Lebanese banking sector, stemming from the impairment of assets held at the Central Bank of Lebanon (Banque du Liban: BDL), increased non-performing loans (NPLs), and government debt restructuring. The plan anticipates the need for between USD10 and 15 billion in external financing for the country over the next five years (3.5-5% of GDP annually). Following these developments, IHS Markit forecasts that total banking-sector assets in Lebanon will contract by 58.7% in 2020 because of a continued severe lending contraction in addition to the significant haircut on banks' exposure to the sovereign and central bank outlined in the plan. (IHS Markit Economists Rebecka Freeman and Gabrielle Ventura) 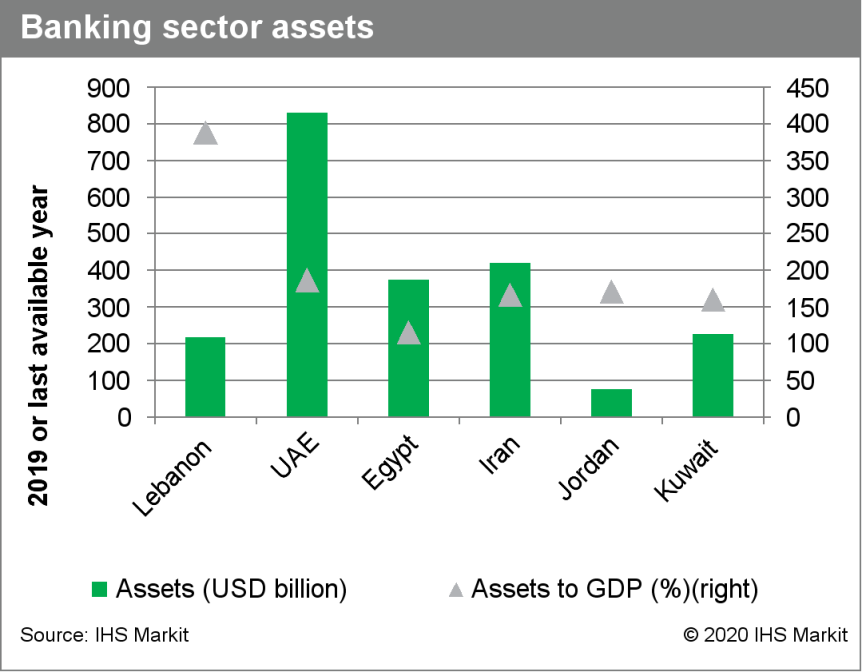 1. Zydus Cadila (India) has said that it has increased tenfold the production of the anti-malarial drug hydroxychloroquine to meet higher international demand for the medicine, which is being widely repurposed as a treatment for coronavirus disease 2019 (COVID-19). (IHS Markit Life Science's Sacha Baggili)

2. Japanese automakers Nissan, Mitsubishi, Mazda, and Daihatsu are planning to put around 20,000 domestic workers on temporary leave. The decision has been taken owing to prolonged production shutdowns caused by the COVID-19 virus outbreak. Additionally, Nissan is seeking a JPY500-billion credit line from major Japanese banks to prepare for a further escalation of the pandemic. Automakers have already made workforce adjustments by encouraging some employees to take paid days off. However, with the uncertainty over when production will resume, companies are stepping up efforts to further mitigate the impact from the disruptions caused by the COVID-19 outbreak. (IHS Markit AutoIntelligence's Tarik Arora)

4. The Indonesian government expects total vehicle sales in the country to plunge 50% year on year (y/y) in 2020, reports Reuters, citing Indonesia's industry ministry. During 2019, total vehicle sales in the country stood at 1.03 million units, while more than 332,000 completely built-up (CBU) units and around 511,000 completely knocked-down (CKD) units were exported, according to data released by the Association of Indonesian Automotive Industries. (IHS Markit AutoIntelligence's Jamal Amir)