The last trading day of one of the most volatile quarters in both the debt and equity markets on record was incongruously calm. Many funds and financial firms will begin receiving updated March month-end valuations of their portfolio of debt and equity assets today, with the true impact of March's broad-based sell-off in risk assets coming to light over the next one to two months.

2. Daily US exploration and production (E&P) company's debt yields this month show the growing distress as the month progressed, with the average yield for CCC E&P debt closing at a startling 151% yield as of yesterday's close: 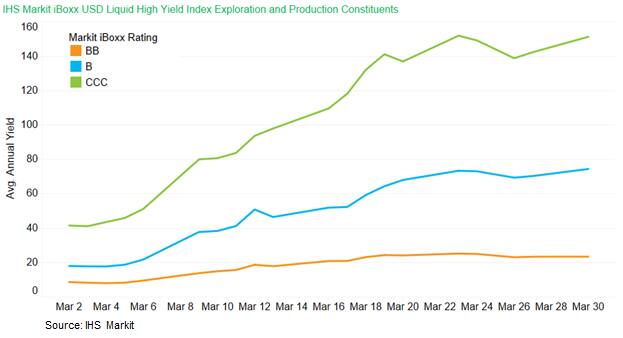 3. The March reading of the US Conference Board Consumer Confidence Index fell 12.6 points (9.5%) to 120.0 from a February level that was revised 1.9 points upward. It was the largest one-month decline since August 2011. The expectations index was responsible for the decline, plunging 19.9 points (18.4%) to 88.2, the lowest since October 2016. The index of consumer views on the present situation was stable, slipping only 1.6 points. This report underscores that prior to the crisis, consumer fundamentals were in a good place, with consumers feeling secure in their job prospects. As layoffs mount, these measures will deteriorate. (IHS Economists David Deull and James Bohnaker)

4. American Chemistry Counsel's chemical activity barometer (CAB), an index of industry activity and leading economic indicator, has reported a sharp drop in March. The CAB index fell 2.6% on a three-month moving average (3MMA) basis, and down 1.3% on a year-on-year (YOY) basis this month. The unadjusted CAB index shows an 8.0% drop in March, the largest single-month decline since World War II.

5. Securing the availability of raw materials will be key to ensuring that the Mexican pharmaceutical industry can meet increased demand, according to the Mexican Association of Pharmaceutical Laboratories' (Amelaf) executive director Juan de Villafranca, quoted by El Economista. Although Mexico has a robust domestic pharmaceutical industry, it is heavily reliant on imported APIs - particularly from China, from which Mexico sources almost 90% of its raw ingredients, according to El Economista. Unlike India, which recently limited the export of 26 APIs due to concerns about shortages related to coronavirus disease 2019 (COVID-19), China is not currently limiting the export of any active ingredients. (IHS Markit Life Science's Ewa Oliveira da Silva)

6. General Motors (GM) has resumed production at its plant in Arlington, Texas (United States), for one week, operating the plant on one shift beginning on 30 March. The one-shift operation is to enable the build-out of the final units of the K2XX full-size sport utility vehicles (SUVs). (IHS Markit AutoIntelligence's Stephanie Brinley)

7. Ford plans to start production of ventilators at its Rawsonville Components Plant in Michigan, United States, by 20 April and expects to produce 50,000 ventilators by 4 July. According to the announcement on 30 March, Ford's plan is in collaboration with GE Healthcare. Ford will produce the ventilators and GE Healthcare will provide clinical expertise and will license the ventilator design from a company called Airon Corporation. (IHS Markit AutoIntelligence's Stephanie Brinley)

8. Canada's Real GDP by industry output increased 0.1% month on month (m/m) in January as output declined in 8 of 20 industries. January's economic performance will probably be the most upbeat for many months as policymakers and businesses navigate the devasting impacts from the COVID-19 pandemic. February's slowdown will be led by large-scale Ontario teachers' strikes and the railway blockades associated with protests of the Coastal GasLink Pipeline project. COVID-19 impacts will be felt most harshly in March. (IHS Markit Economist Arlene Kish)

1. Consumption of goods in France declined by 0.1% month on month (m/m) in February, according to seasonally adjusted figures released by the National Institute of Statistics and Economic Studies. Consumption of goods has fallen in three consecutive months for the first time since early 2014, when the economy was still struggling from the aftermath of the eurozone debt crisis. IHS Markit updated forecasts, due to be published later this week, show French GDP declining by 4.1% in 2020. Risks to our 2020 projection remain on the downside, particularly if the COVID-19 containment measures are extended beyond May. (IHS Economist Diego Iscaro)

2. The Finnish general government budget deficit widened to about 2.7% of GDP from 2.0% in 2019, as economic growth slowed towards the end of the year and spending growth exceeded the gain in revenues. Fiscal stimulus to combat the economic fallout from the coronavirus disease 2019 (COVID-19) virus crisis is bound to further grow the deficit in 2020 and push the debt-to-GDP ratio back above 60%. The outlook is decidedly weaker now that the COVID-19 virus has necessitated a decisive fiscal response from the government, which has put forward an EUR15 billion support package designed to help businesses across all sectors to stay afloat during the pandemic. This comes after the center-left coalition had already outlined relatively generous infrastructure spending for 2020. (IHS Markit Economist Venla Sipilä)

3. The Spanish economy continued to grow at a relatively solid 0.4% q/q pace in the final quarter of 2019, but it is now facing a deep recession in the first three quarters of 2020. The immediate outlook for the Spain economy has deteriorated markedly with the country being the second worst-hit country in Europe from the coronavirus disease 2019 (COVID-19) virus. Spain is in a state of emergency for only the second time since the country transitioned to democracy in 1975 and Prime Minister Pedro Sanchez has announced that all non-essential workers must stay home until the 9 April. A major impact of the COVID-19 virus will be on Spain's sizeable tourism sector, which accounted for 14.6% of GDP in 2018 (source: World Travel and Tourism Council or (WTTC) and employed 2.8 million workers (14.7% of total employment) in the same year. (IHS Markit Economist Raj Badiani)

1. The city authorities in Beijing, China's capital, have announced fresh policies in an attempt to boost new car sales. The scheme is primarily designed to reduce the number of high-emissions vehicles in the city by offering incentives to owners who scrap these old models or transfer their vehicles' registration to other cities. Both passenger vehicles and commercial vehicles are eligible for incentives under the program. (IHS Markit's AutoIntelligence's Abby Chun Tu)

2. Japan's retail sales rose by 0.6% month on month (m/m) for the fourth consecutive month of increase in February, and the year-on-year (y/y) figure also turned to an increase of 1.7% following four straight months of declines. Continued measures to contain the coronavirus disease 2019 (COVID-19) virus will require staying home, which is likely to underpin retail sales of food and other necessities, including face masks and anti-virus products, but suppress sales of non-necessity goods. (IHS Markit Economist Harumi Taguchi)

3. Japan's Index of Industrial Production (IIP) rose by 0.4% month on month (m/m) in February for the third consecutive month of increase. A solid rise in manufacturers' shipments (up 2.6% m/m) led inventory to decline by 2.0% m/m, and the inventory ratio fell by 2.5% m/m. the accelerated spread of the COVID-19 virus and containment measures in a greater number of countries and regions are likely to dampen Japan's goods and service exports. Exports to the US and Western Europe, areas for which growth forecasts of IHS Markit were deeply revised down recently, constitute 19% and 12% of total exports, respectively. (IHS Markit Economist Harumi Taguchi)