Relatively positive sentiment in equity markets today as we approach quarter/month-end tomorrow. The majority of US and European economic data released over the past few weeks have not reflected the initial impact of COVID-19, which we will only begin seeing with next month's release and it's difficult right now to gauge what the market will be expecting in economic and earnings releases next month.

3. According to Dealogic data cited by the Financial Times, despite the much higher cost of borrowing, high-grade corporate issuance during March has reached USD244 billion including a record USD150 billion for US firms, as companies rushed to lock in additional liquidity. (IHS Markit's Brian Lawson)

4. Colombia's central bank on 27 March voted to cut interest rates from 4.25% to 3.75%; rates had been holding steady since May 2018. IHS Markit has downgraded Colombia's growth forecast to recession in 2020, but has pushed up the inflation forecast and increased the depreciation expected in 2020, all of which will complicate the monetary path.
(IHS Markit's Ellie Vorhaben)

5. Macy's Inc. will furlough the majority of its 130,000 employees beginning this week. The company told staff on Monday that it would continue to pay health benefits and cover 100% of premiums at least through May. (WSJ)

6. Very calm day in credit markets according IHS Markit's CDS indices, with the European indices slighter weaker at +4bps for iTraxx Europe and +4bps iTraxx-Xover. North American indices were slightly better on the day at -3bps for CDX-NAIG and -6bps for CDX-NAHY. The below shows the steady tightening of CDX-NAHY live intraday pricing since last Monday:

7. The oil market crisis is forcing companies to take a very close look at their portfolios and spending plans for this year - including the new projects they planned to sanction. Given the severe deterioration in oil markets, extreme price uncertainty and corporate spending retreat, we don't expect any significant oil projects to be sanctioned for the rest of the year. (IHS Markit Energy Advisory's Roger Diwan)

1. The Eurozone's economic sentiment index (ESI) fell nearly nine percentage points month-on-month (m/m) in March, the largest drop on record (see chart below). However, as the survey responses for March do not fully capture the period after the containment measures were introduced, further weakness is inevitable. Indeed, even after March's collapse, the ESI is still around 30 percentage points above its record low in early 2009 at the height of the global financial crisis (GFC). (IHS Markit Economist Ken Wattret) 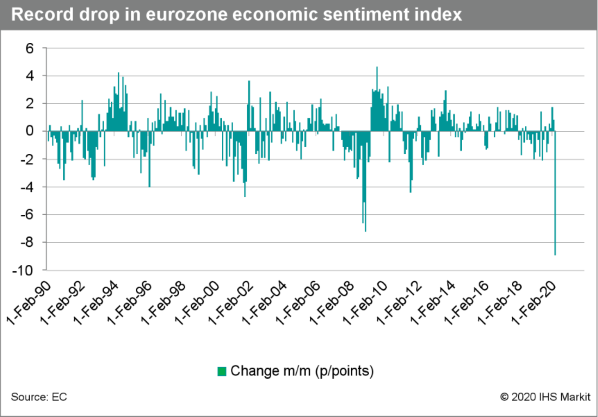 2. Fitch has downgraded the United Kingdom's credit rating by one notch to AA-, while switching its outlook from Stable to Negative. The trigger for the gloomier assessment is the "the deep near-term damage to the UK economy caused by the coronavirus disease 2019 (COVID-19) virus outbreak and the lingering uncertainty regarding the post-Brexit UK-EU trade relationship". Fitch's decision to downgrade the United Kingdom's credit rating was expected, given the scale of the COVID-19 virus hit on the economy and the country's public finances. The reaction to the downgrade was calm, with many investors anticipating a flurry of sovereign rating downgrades for many European economies. (IHS Markit Economist Raj Badiani)

3. The CEO of the Volkswagen (VW) Group Herbert Diess has said the company is currently burning through EUR2 billion (USD2.2 billion) of cash a week as a result of the coronavirus disease 2019 (COVID-19) virus outbreak, according to a television interview he gave to German channel ZDF. VW is Europe's largest carmaker in terms of plant footprint and number of employees, so its cash burn will be higher than its rivals as a result of its high fixed costs, although some of these are being taken care of by the German government's short-time working program. (IHS Markit AutoIntelligence's Tim Urquhart)

4. Mercedes-Benz has offered the German government its 3D printing capability to help with producing medical equipment to help with its response to the coronavirus disease 2019 (COVID-19) virus outbreak while the company's Formula One team has offered to supply the UK government with a simple ventilator design. (IHS Markit AutoIntelligence's Tim Urquhart)

5. German headline CPI inflation has softened from 1.7% to 1.4%, owing mainly to the oil-price plunge, while food prices remained firm and thus supportive. The likely persisting closure of much of the retail and services sector during April is giving statisticians major headaches at present, and upside inflation risks loom for 2021. (IHS Markit Economist Timo Klein)

6. Russian President Vladimir Putin has declared this week a paid 'non-working week' for all workers in the country, which has necessitated the shutdown of all vehicle production from today to 3 April. The governmental decree has led Russia's biggest carmaker AvtoVAZ to announce a stoppage in line with the 'non-working week'. (IHS Markit AutoIntelligence's Tim Urquhart)

8. South Africa's sovereign's CDS spreads have widened accordingly (they had an implied rating from the CDS market of 'B', prior to the downgrade). Five-year levels were trading 32bps wider at 440bps, the widest level for 11 years. (IHS Markit's Gavan Nolan)