Equity markets were lower across most of the Europe and the US today, as negative economic reports out of China and the rapid growth of new COVID-19 cases in the US weighed on market sentiment.

3. The S&P was gradually rallying from the lows in the morning, but abruptly switched course and declined nearly 3% from 3:30pm ET to the close.

4. TGIF? The below graph shows the count and average performance of the higher and lower daily S&P 500 closes since February by the day of the week. Fridays had the lowest number of days that closed higher, but for the two days it closed higher it did average the highest average return of 4.7%. Monday's down days averaged the worst at -6.5%. 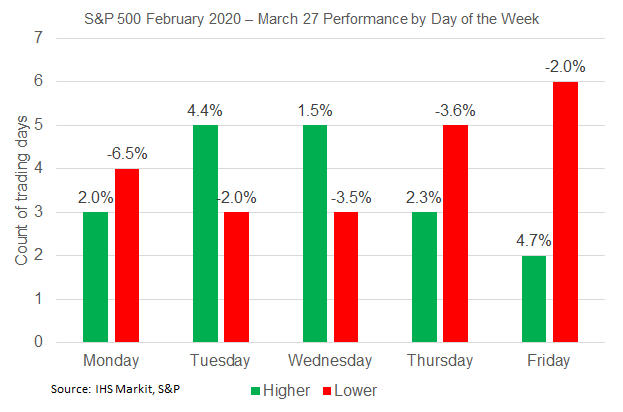 7. India's shut down will be felt in coal markets. As per IHS Markit's Commodities at Sea, during week-12, coal shipments from Hampton Roads (which mostly ships metallurgical coal for the steel mills) were above average monthly levels and were calculated at 785kt (30-Day PACE of 3.4mt); however Baltimore shipments were calculated at 359kt (30-Day PACE of 1.5mt). Baltimore shipments are likely to remain under pressure as its major buyer India has been put under lockdown until 14 April by the Government in order to contain the spread of COVID 19. At least 12 Indian ports - likely more - have already declared force majeure on the handling of coal and other materials in anticipation of stricter stay-at-home measures. (IHS Markit's Rahul Kapoor and Pranay Shukla)

9. The Bank of Canada made a third 50bp cut to the overnight rate, lowering it to 0.25%. They also announced a Commercial Paper Purchase Program or CPPP and that they will be purchasing $5 billion per week of Government of Canada debt securities in the secondary market across the yield curve. (IHS Markit Economist Arlene Kish)

10. GM has announced that it will temporarily reduce pay for all salaried employees globally by 20% to conserve cash, although it also promised to make up the lost income later in the year. GM is also furloughing 6,500 workers in the United States, with these employees being placed on leave and receiving 75% of their pay during the period. Executives will see deeper pay cuts, according to reports, by 30% for the senior leadership and 25% for other executives. (IHS Markit's Stephanie Brinley)

11. Fashion and luxury revenues are expected to plunge between 25-35% this year as a direct result of store closures owing to coronavirus lockdowns, according to the Boston Consulting Group. The impact on fashion and luxury is expected be more severe this year than the recession a decade ago, with total sales dropping between $450bn to $650bn from 2019 levels. (FT)

12. The Republic of Panama has provided a positive indicator for stronger emerging market credits, despite generalized risk aversion. On 27 March, it sold USD2.5 billion of 36-year notes at 4.5%, after demand reached over three times the amount offered. While a clear success, the deal's cost is far higher than before: last November Panama had paid 2.83% to sell debt maturing in 2053. (IHS Markit's Brian Lawson)

13. IHS Markit liquidity metrics in the Price Viewer indicate that more than 10 unique dealers have quoted the Republic of Panama's 3.16% 1/23/2030 maturity sovereign bond almost every day since the beginning of this year (line graph indicates annualized bond yields). 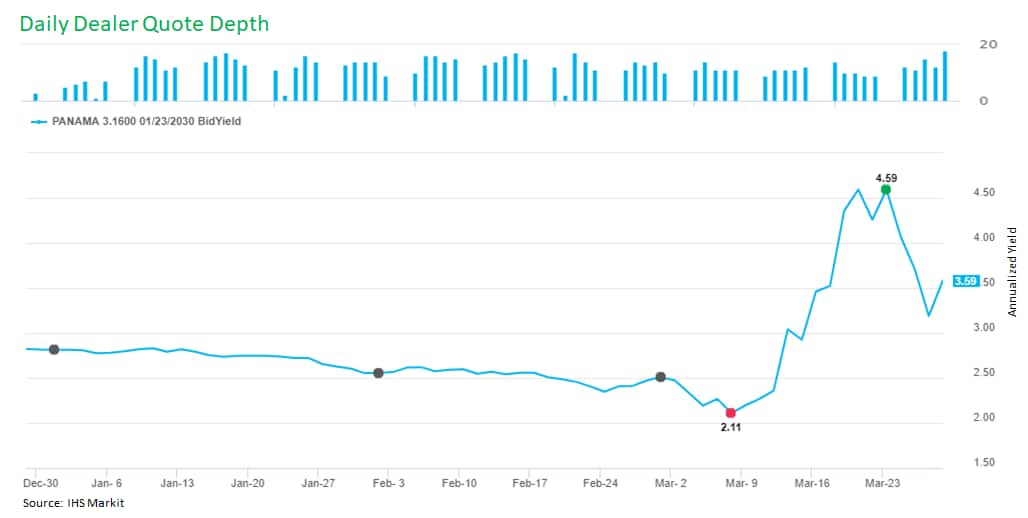 14. In a press release, Petrobras announced a revised 2020 capital budget of $8.5 billion, down 30% from its initial capital budget for the year of $12 billion. The company will postpone exploratory activities, the interconnection of wells and construction of production and refining facilities. (IHS Markit's Karan Bhagani)

15. Major Brazilian pharmacy chain RaiaDrogasil has announced that it will not be raising the prices of its products because of the "crisis scenario caused by the coronavirus pandemic", referring to the coronavirus disease 2019 (COVID)-19. RaiaDrogasil is one of Brazil's main pharmacy networks with presence in 23 states. The company's move may motivate other retailers to follow suit and freeze their prices. (IHS Markit's Ewa Oliveira da Silva)

2. France's consumer confidence index declined only marginally from 104 to 103 in March, according to seasonally adjusted figures released by the National Institute of Statistics and Economic Studies. March's survey is unlikely to reflect the full extent of the fall in consumer confidence resulting from the coronavirus disease 2019 (COVID-19) virus outbreak. We expect the confidence index to collapse in April, as the extraordinary containment measures put in place to limit the spread of the COVID-19 virus will have a severe impact on private consumption. (IHS Markit Economist Diego Iscaro)

3. Extensive blank sailings have left virtually no empty containers available at European ports, according to the latest data, and extreme measures implemented to slow the spread of the coronavirus disease 2019 (COVID-19) could delay the recovery of container demand. Container xChange's Container Availability Index (CAx), which forecasts the availability of containers in particular ports to allow better planning, shows there is almost no container equipment in Europe and North America as a result of withdrawn capacity and the inability of carriers to turn around boxes and position them where they are needed. "We don't have equipment for export to Asia as there is simply no equipment," the logistics director for a large German exporter told IHS Markit's Journal of Commerce (IHS Markit's Greg Knowler)

a. By sector, 37 among the 41 surveyed sectors report y/y profit decline, except continuous expansion in tobacco, food manufacturing, non-ferrous metals, and natural gas and petroleum exploration.

b. Auto and electronic equipment manufacturing suffered the most with profits declining around 80% y/y;

d. The liability-to-asset ratio for the private sector is likely to rise further over the coming months under the ongoing monetary stimulus to help SMEs recover.

2. Automakers in Guangdong, Shandong, Hebei, Beijing, and Chongqing are ahead of others in China in the resumption of auto manufacturing. Auto manufacturing in Hubei province has picked up pace during the past week thanks to local authorities pushing for the region to regain its production strength. IHS Markit's latest production forecast expects China's light-vehicle production volumes to drop by 11.5% during 2020 to around 21.6 million units. We currently expect a rebound of 7.5% in production in 2021 as the COVID-19 impact weakens. (IHS Markit's Abby Chun Tu)

3. Defying expectations, Hong Kong SAR's exports posted a modest increase of 4.3% year on year (y/y) in February, although the gain was mainly driven by holiday distortions because of the different timing of the Lunar New Year holidays. Taking January and February 2020 together to exclude seasonal factors, exports contracted by 12% y/y, which marked the largest two-month decline since 2009. (IHS Markit Economist Ling-Wei Chung)

b. In addition, shipments to mainland China contracted by 7.9% y/y in January-February 2020, despite a 13.2% y/y expansion posted in February.

c. Exports to many Asian economies recorded modest gains in the first two months, including a 4.3% y/y increase in shipments to India, a 4.2% y/y gain in those to Vietnam, and 1.9% y/y growth in sales to Taiwan.

4. The Reserve Bank of India cut the country's repo rate by 75bps to 4.4%, which is the lowest level since inception approximately two decades ago.

Join us as we discuss the application of Option Pricing Model (OPM) Backsolve since it has gained more traction in… https://t.co/r7cEfUrL8W