Most global equity indices, government bonds, credit indices, and US municipal bond markets closed higher today. Some of the day's positive momentum came from the 8:30am ET release of the US initial claims for unemployment insurance report, despite the number of people filing for unemployment benefits being over 4x higher than the previous record set in 1982. 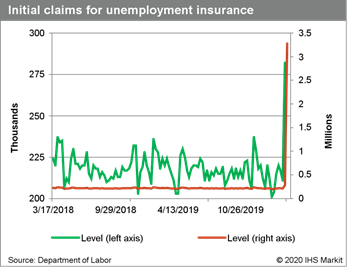 2. It appears that global markets may have been expecting an even higher US initial claims report, as both credit and equities rallied simultaneously with the 8:30am ET release of the report. The release time is indicated by the red dashed line in the below graph of intraday the CDX NA High Yield:

4. U S municipal bonds had another strong day after yesterday's record single day rally, as IHS Markit's AAA Municipal Analytics Curve showed over 50bps of tightening across the entire curve versus yesterday's close:

5. While Chinese manufacturing and trucking capacity is recovering as workers return from quarantine, the surge of containerized exports being produced threaten to overwhelm some North American ports and inland networks. And with trans-Pacific carriers having aggressively slashed capacity, canceling more than 80 vessels to the West Coast from early February to early April, cargo owners could find that freight contracted at rates below the current spot rate pricing is being rolled — i.e., pushed to a later sailing than was booked. "Volumes are low now for everybody, but come May, it will be just the opposite," Scott Weiss, vice president of business development at Port Logistics Group, told IHS Markit's Journal of Commerce. "I'm telling all of our customers, 'Don't be fooled because volumes now are low.'" (IHS Markit's Journal of Commerce and PIERS)

6. Global light-vehicle sales are forecast to fall by 12% year on year (y/y) during 2020 as a result of the impact of the coronavirus disease 2019 (COVID-19) virus, according to IHS Markit's latest forecast. This represents a downgrade of 10 million units compared to our pre-COVID-19 virus forecasts made in January 2020. A decline of this magnitude would also be considerably worse than the two-year peak-to-trough decline of 8.0% during the global recession in 2008/2009. (IHS Markit's Stephanie Brinley, Ian Fletcher, and Tim Urquhart)

7. US gasoline markets are signaling increasing distress, with gasoline prices testing multi-decade lows as demand evaporates. Reformulated Blendstock for Oxygenate Blending (RBOB) gasoline prices fell to 40 cents per gallon early this week with sweeping movement restrictions across the country set to push domestic gasoline demand dramatically lower in a matter of weeks. Gasoline margins across key US refining hubs such as Houston, Chicago and New York Harbor have all fallen deep into negative territory. The gasoline crack spread in New York fell to negative $10/bbl this week, a sign of a major oversupply, prompting refiners to quickly cut the amount of crude they process at their facilities. (IHS Markit's Karim Fawaz)

8. The below chart from IHS Markit's Commodities Pricing data shows that April 2020 maturity NYMEX unleaded (RB) to Brent swap prices were ranging in the $10 - $16 area for most of the past 12 months, meaning that refiners could make a profit of $10 - $16 dollar on a barrel of gasoline refined from Brent crude oil. As demand has collapsed, the spread has fallen to -$8.40 (COB 24 March), which indicates that refined gasoline is worth $8.40 per barrel less than the unrefined crude. 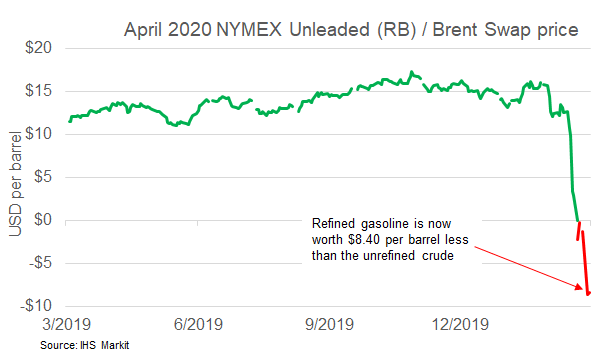 10. The US Senate passed the $2 trillion stimulus bill and it will likely be put up for a vote tomorrow by the US House of Representatives.

12. US dollar is -3.4% since its recent March 19 peak as market sentiment continues to improve.

2. Eurostat's "flash" estimate of March consumer sentiment in the eurozone shows a five-percentage-point plunge, the biggest month-on-month (m/m) decline in the history of the series (chart below). March's final economic sentiment data set for the Eurozone and member states will be released on 30 March and is likely to show an even steeper decline in consumer sentiment. (IHS Markit Economist Ken Wattret)

3. Isopropyl alcohol (IPA), one of the main disinfectants used in hand sanitizers and alcohol wipes has seen demand surge as a result of COVID-19. IPA prices have spiked to around €2,400-€2,500/mt in Europe from pre-pandemic levels of €900/mt due to a surge in hand sanitizer demand, market sources said. Here are the 2020 rankings of global market share of Isopropyl Alcohol production from IHS Markit's Chemical Division:

4. In response to panic buying stemming from public fears related to the global pandemic caused by the coronavirus disease 2019 (COVID-19) virus, the Kazakh authorities announced yesterday 25 March that they are banning the export of 11 categories of agricultural products, including buckwheat, flour (both rye and wheat), sugar, sunflower oil and vegetables from 22 March until 15 April. (IHS Markit Economists Alex Melikishvili and Alex Kokcharov)

a. On 23 March, Deputy Economy Minister of Ukraine Taras Vysotskyi said that his government was not planning to introduce any restrictions on exports of food products despite the start of panic buying domestically and despite calls for such restrictions by politicians and the media.

b. On 20 March, the Russian Federal Veterinary and Phytosanitary Supervision Service banned exports of all types of groats, including buckwheat and rice, for an initial period of 10 days, also in response to the panic buying linked to the COVID-19 virus pandemic.

c. All three countries - Russia, Ukraine and Kazakhstan - are significant exporters of agrifood products to global markets, including in Europe and the Middle East, especially of grains and associated products.

1. The extended closings of Chinese factories beyond the two-week shuttering tied to New Year festivities has been devastating to trans-Pacific trade volumes. On a year-over-year basis, US imports from China in February crashed to a near four-year low, and total Asia imports fell to an almost three-year low, according to data from IHS Markit's PIERS. US containerized imports from China plunged 22 percent year over year for the month, while total imports from Asia sank 10.1 percent compared with February 2019. (IHS Markit's Journal of Commerce and PIERS)

2. Isopropyl alcohol (IPA) has been granted "essential commodity" status in India amid the nationwide 21-day coronavirus disease 2019 (COVID-19) lockdown that began on 25 March market sources said. "[IPA] prices have been capped at Rs70/kg ($929/mt, €849/mt) here in India for hand sanitizer production to ensure hand sanitizer remains affordable," said a source at Deepak Fertilizers and Petrochemicals Corp., the country's sole producer of IPA with a capacity of 70,000 mt/year. Consumption has gone up by 4,000 mt, or 25%, since early March as the spread of COVID-19 boosted hand sanitizer sales, the Deepak Fertilizers source said. (IHS Markit's Trisha Huang)