Oil had its best single day on record and US initial claims for unemployment insurance indicated job losses more than double the worst week on record (which was only last week), but the global markets remained relatively calm today and US and European equity markets closed higher.

1. On the heels of a conversation with Saudi Crown Prince Mohammad Bin Salman earlier today, President Donald Trump tweeted out his "expectation" and "hope" that Saudi Arabia and Russia would cut supply by 10 MMb/d and "up to 15 MMb/d", sending oil markets into a frenzy. The tweet came a day ahead of a gathering of US oil industry CEOs at the White House. The conversation was confirmed by Saudi Arabia, that subsequently issued a press release calling for a meeting of OPEC+ and "a group of other countries". One way or another, 10 MMb/d of supply was set to be curtailed in the next three months. In IHS Markit's Oil Market Edge on Monday, we had already set forth our expectation that global supply would be curtailed to the tune of 10 MMb/d in 2Q2020 as a result of the unmanageable scale of the inventory build-up that our balances indicated in an unrestrained supply scenario. (IHS Markit Energy Advisory's Roger Diwan)

2. Crude oil closed +25%/$25.30 per barrel following the President's announcement, which is the largest single day gain on record.

3. Initial claims for unemployment insurance increased by 3,341,000 to 6,648,000 in the week ended 28 March, more than double the prior week's record high and almost 10 times the pre-COVID-19 record high of 695,000 from October 1982. This unprecedented spike in claims illustrates the depth of the layoffs due to coronavirus disease 2019 (COVID-19), as more than 275 million Americans have been advised or ordered to stay at home and businesses deemed "non-essential" have been shuttered. (IHS Economist Akshat Goel)

4. IHS Markit's CDX North America High Yield index continued to widen after the US Initial claims report at 8:30am ET, but did react positively to the news of the proposed oil production cuts and the rally in oil prices that followed; albeit inevitably ending the day modestly weaker at +6bps/743bps:

5. S&P 500 futures did not take the initial claims report well, but the sentiment shifted course to a positive trajectory shortly before the open of the US markets.

6. In the wake of layoffs related to the COVID-19 outbreak, 39 states and the District of Columbia saw their largest number of initial claims for unemployment insurance. New Hampshire, Rhode Island, and Louisiana saw the largest year-over-year increase in claims, growing at a staggering 5,594%, 4,629%, and 4,374% y/y, respectively. In the week ended 21 March, US initial claims numbered 3,283,000, increasing 3,001,000 from the prior week. Every state saw a rise in initial claims from the week prior, and 39 states along with DC saw record-high levels of claims filed (data collection began in 1986). (IHS Markit Economists Alex Minelli and Fran Hagarty) 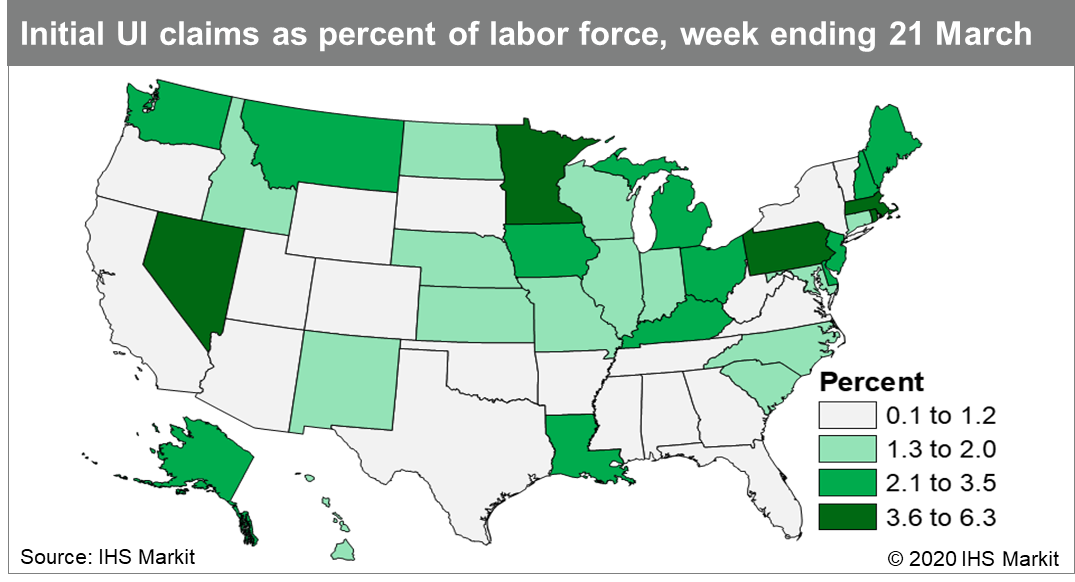 7. Employers announced 222,288 planned layoffs in March, according to Challenger, Gray & Christmas—up an astronomical 292.3% from February, the largest month-over-month increase recorded since May 1995. March's number was up 266.9% over the same period a year ago. Unsurprisingly, with many states and major metropolitan areas having shut down nonessential businesses, the hardest-hit sector and recipient of the lion's share of the coronavirus-related cuts in March was the entertainment/leisure sector, with 96,887 announced layoffs year to date. (IHS Markit Economist Rebecca Mitchell)

8. Commodity prices, as measured by the IHS Markit Materials Price Index (MPI), fell 4.7% last week, in yet another large broad-based retreat tied to the deepening global recession. The MPI is now down 22.1% since the start of the year with no sign of a bottom forming as the first quarter ends. Nine of the MPI's ten components declined last week. Chemicals, fiber, and rubber were the biggest movers, all falling more than 8% week to week. Benzene prices, which are heavily influenced by moves in crude oil, plunged 29%, driving a 10.9% decline in the MPI's chemicals subindex. (IHS Markit Pricing and Purchasing's Thomas McCartin) 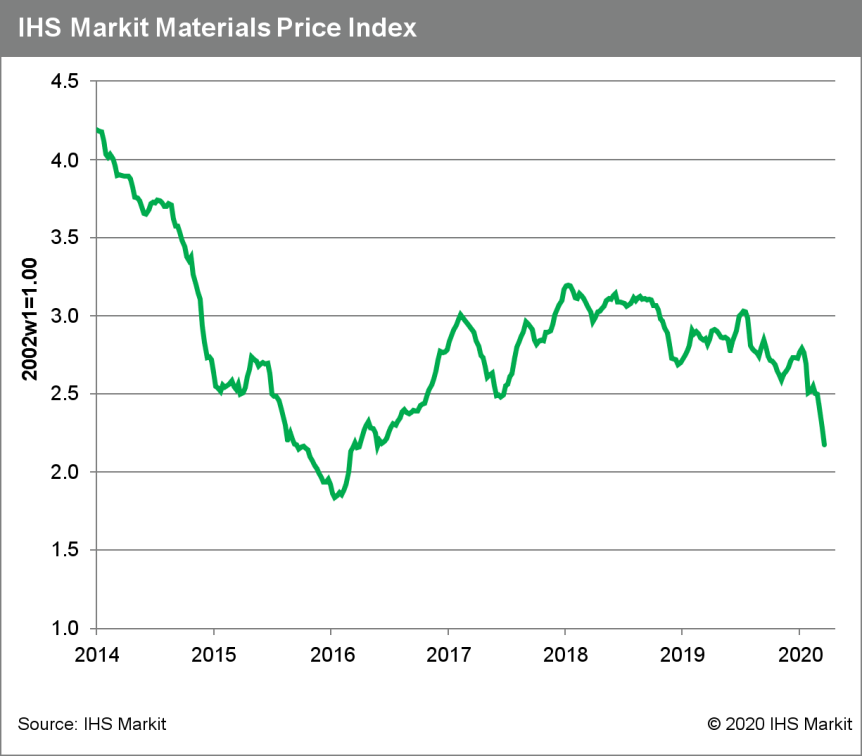 9. Mexico's President Andrés Manuel López Obrador reiterated on 1 April that his government currently does not plan to provide any tax-related incentives to businesses struggling to mitigate the negative economic effects of the spread of COVID-19. The Mexican economy entered recession in 2019 and IHS Markit currently forecasts a 1.8% contraction in 2020; extended refusal to support the private sector will increase the risk of bankruptcies and force-majeure events. (IHS Markit Economists Carlos Cardenas and Johanna Marris)

10. After two rate cuts in March, Chile's central bank forecasts recession for 2020 worth between 1.5% and 2.5%, caused by a mix of declining domestic demand because of the implementation of social isolation policies, weaker terms of trade, tighter financing conditions and market risk aversion, and declining business and consumer expectations. IHS Markit's current forecast calls for a 4.4% average economic decline in 2020 caused by a significant decline in private consumption and investment, which will only be partially mitigated by a large fiscal spending spree by the government. The global price for copper has fallen by 4% during the first quarter of 2020 compared with the last quarter of 2019, driving the Chilean peso to multiple new historic lows and a total depreciation of around 13% when compared with the beginning of 2020. Nevertheless, copper production expanded by 5% during the first two months of the year, although export values declined. (IHS Markit Economist Ellie Vorhaben)

1. Italy's passenger car registrations have plummeted by 85.4% year on year (y/y) during March, according to the latest data published by the National Association of Foreign Vehicle Makers' Representatives (Unione Nazionale Rappresentanti Autoveicoli Esteri: UNRAE). Demand this month fell to just 28,326 units against 194,302 units in March 2019. As a result, the market's performance in the year to date (YTD) is down by 35.5% y/y to 347,193 units. It was a very similar picture in the Spanish market, although the decline was slightly less extreme. The latest data published by the Spanish Association of Passenger Car and Truck Manufacturers (Asociación Española de Fabricantes de Automóviles Turismos y Camiones: ANFAC), shows that registrations have dropped by 69.3% y/y to 37,644 units. This has now meant that its YTD stands at 218,705 units, a decline of 31% y/y. (IHS Markit AutoIntelligence's Ian Fletcher)

2. According to the Austrian Labour Market Service (AMS), there were 504,345 unemployed people in Austria at the end of March, up 170,358 from February and up 199,934 (65.7%) versus March 2019. The unemployment rate jumped from 7.5% in March 2019 to 12.2%; thus it went from an annual dip of 0.3 percentage point in February to a massive increase of 4.7 percentage points in March. These numbers, both in terms of the monthly increase and the end-March level, are unprecedented in Austria's post-war history. (IHS Markit Economist Timo Klein)

3. Turkey's trade deficit in January-February reached USD7.484 billion. The gap was more than USD3.4 billion larger than it had been in the same period of 2019. The focus on consumption-driven growth is apparent looking at import gains, with consumer goods imports soaring by 23.5% y/y in the first two months of the year, more than 10 percentage points faster than the expansion of either capital or intermediate goods. The foreign trade data in March will be completely different than what we have seen through the first two months of the year. We anticipate a complete collapse of exports to Europe, which is likely to throw the trade balance deep into deficit. Imports will also plunge, but not nearly as deeply as will exports. (IHS Markit Economist Andrew Birch)

4. S&P Global Ratings has lowered Nigeria's long-term foreign- and local-currency sovereign credit ratings to B-. The outlook is set at Stable. The sharp fall in global oil prices is expected to increase Nigeria's external and fiscal financing needs, guiding the revision of S&P's long-term foreign- and local-currency credit rating to B- on the generic scale (in the Very High Payments Risk category; equivalent to 60/100 on the IHS Markit scale) on 26 March. <span/>(IHS Markit Economist Thea Fourie)

6. Continental has become the latest Tier-1 automotive component supplier to withdraw its financial guidance for 2020 as a result of the impact of the COVID-19 outbreak, according to a Reuters report. Continental said it was withdrawing the previous forecast for the current fiscal year 'due to the uncertainty regarding the duration of restrictions caused by the coronavirus pandemic and the related possible consequences.' . (IHS Markit AutoIntelligence's Tim Urquhart)

7. Most European govt bonds were weaker on the day, except for Italy -6bps; UK/Spain +2bps, Germany +3bps, and France +4bps.

2. The 21-day lockdown announced by the government of India to curb the spread of the coronavirus disease 2019 (COVID-19) has disrupted the flow of pharmaceutical exports from the country. According to the local industry news source Pharmabiz, the restrictive measures on public movement have caused a "scarcity of truck drivers, freight operators and cargo handlers" and is therefore "disrupting the movement of cargo and freight to and from ports and airports". Reports of a disruption to the transport of pharmaceutical supplies for export will heighten international concern over the impact of COVID-19 on the availability of medicines from India, which is a major supplier of active pharmaceutical ingredients (API) to the global market and which supplies approximately 20% of generic finished formulations globally in volume terms. (IHS Markit's Sacha Baggili)