Relatively calm day in the global markets, as most of Europe and some APAC markets were closed in observance of the Easter holiday. Most US equity markets closed lower, as Q1 earnings will be a key focus over the next couple of month to finally quantify the initial financial impact of the COVID-19 pandemic on corporations and whole sectors. In addition, investors will be closely monitoring the degree to which COVID-19 infections return to the regions impacted during the initial wave.

Another important area of focus for investors and corporations has been using an assortment of data to determine the current, and predicting the future, impact the pandemic will have on labor/component/material/transport disruptions and how the deterioration in critical suppliers' financials will impact supply chains across the food, manufacturing, pharmaceutical, and all other types of industries.

3. After a four-day marathon of global virtual meetings and frantic petrodiplomacy that pulled in presidents and princes from the U.S., Mexico, Russia, Saudi Arabia and beyond, the OPEC+ group agreed to collectively cut production in May and June by 9.7 MMb/d. On top of the two-month cuts, the group signaled a return to long-term market management by committing to a series of cuts through April 2022 to manage the post COVID-19 cycle and coming inventory overhang. This historic cut, paired with the expected declines and shut-ins likely to occur in the next few months in the United States, Canada and elsewhere, promise to remove up to 14 MMb/d in May and June. The group of producers is also mindful of the scale of the demand collapse of around 20 MMb/d and will likely attempt to communicate as close a supply commitment as possible to this figure. (IHS Markit Energy Advisory's Roger Diwan)

5. A key detail of the Federal Reserve's Main Street Expanded and Main Street New Loan Facilities announced on Thursday, April 9 were the loan limits being intertwined with the leverage restrictions of each program. The restriction may keep very levered borrowers from using the facility. Data from S&P's Leveraged Commentary & Data (LCD) group indicates that approximately 33% of 2019 loans from large corporations had a 6.00x leverage or higher:

8. "The cycle is back, and it will no doubt be a deep [drop] versus what we were saying even six months ago, before the [COVID-19] impact on the global economy," IHS Markit's Mark Eramo said in a presentation for the IHS Markit World Petrochemical Conference 2020 Online. Base chemical and plastics earnings had a strong run from 2013 through 2018, with cash earnings peaking above $200 billion in 2018, according to IHS Markit estimates. "We started to see earnings come off in 2019; they will continue to fall in 2020," Eramo said. "The 2020 level could be much lower depending on the severity of the recession." Cash earnings in 2021 and 2022 could bottom out at half of 2018 peak levels before recovery in 2023-2025, according to current IHS Markit forecasts.

9. Increasing integration between the refining and petrochemical sectors, along with the continued "greening" of the downstream business, means petchems should be seen as a long-term "natural hedge" for refiners as their product value chain evolves, according to Sandeep Sayal, vice president/downstream energy research at IHS Markit. Speaking at a live session of the IHS Markit World Petrochemical Conference (WPC) 2020 Online, Sayal notes there will be "more and more greening of the refining complex," including solar and wind power potentially being part of the value mix in terms of trying to generate electricity from greener sources. There will also be ongoing carbon sequestration and carbon capture initiatives as part of the worldwide energy transition.

10. Smithfield Foods said Sunday that its plant in Sioux Falls, S.D., one of the nation's largest pork processing facilities, would remain closed indefinitely at the urging of the governor and mayor after 293 workers tested positive for coronavirus. The plant, which employs 3,700 workers and produces about 130 million servings of food per week, is responsible for about half of the state's total number of cases. The shuttered plant produces about 4 percent to 5 percent of the country's pork according to Smithfield's chief executive. (NY Times)

11. U.S. airlines have mortgaged gates, flight paths and other assets to weather the coronavirus crisis. Now, they are considering selling miles in bulk to their credit-card partners to raise cash. United Airlines Holdings Inc. and Delta Air Lines Inc. and their respective credit-card partners, JPMorgan Chase and American Express Co. have discussed unloading miles ahead of schedule and for less than the lenders would ordinarily pay, according to people familiar with the matter. (WSJ)

a. The lawsuit was filed by BMS on behalf of its Juno Therapeutics division, against Gilead's subsidiary Kite Pharma over Yescarta's alleged infringement on the patent licensed by BMS from the Memorial Sloan Kettering Cancer Center in New York related to chimaeric antigen receptor (CAR) T-cell immunotherapy treatment for cancer, according to the source.

b. Includes the USD778.0 million initially awarded by a federal jury in Lost Angeles in December 2019, as well as USD389.0 million in enhanced damages, and a pre-judgement interest on the jury verdict of USD32.8 million, according to the source.

13. Brazilian bus and coach manufacturer Marcopolo announced the partial resumption of its production after 20 days of collective vacation at its plant in Caxias do Sul, Rio Grande do Sul (RS) and Duque de Caxias, Rio de Janeiro (RJ) units on 13 April, reports Automotive Business. The automaker is yet to decide on the return date of the São Mateus, Espírito Santo (ES) plant. (IHS Markit AutoIntelligence's Tarun Thakur)

1. The UK Treasury is looking at doubling the amount midsized companies can borrow to £50 million under its proposed emergency coronavirus loan scheme following concerns that many larger businesses would be left without adequate state support. As well as doubling the size of the largely state-guaranteed loan, ministers will also consider removing the £500m annual turnover cap to expand what is dubbed the Coronavirus Large Business Interruption Loan Scheme to larger companies. (FT)

2. The countries of Central and Eastern Europe, fearing their relatively weak health-care systems would be overwhelmed by the virus, had generally moved quicker than Western Europe to enact strict social-distancing rules and restrict movement to contain outbreaks. Data indicates that COVID-19 infections in several Eastern European countries have largely been kept under control and governments are starting to loosen lockdowns. By comparison (as of 12 April), Spain had lost 350 people per million of its population to Covid-19, Italy 322, Belgium 314, France 202 and Britain 145, according to Johns Hopkins University data. Romania, in contrast, had lost 15 per million, the Czech Republic 12, Poland 5 and Slovakia 0.4. (WSJ)

3. In a filing last week, the European Commission said BlackRock's Financial Markets Advisory will study how the EU could use environmental, social and governance-related factors in the prudential supervision and regulatory risk analysis of the region's banks. BlackRock will also analyze how the EU could boost the growth of green finance and the market for sustainable financial products. (FT)

4. The International Monetary Fund (IMF) is granting USD147 million in urgent financial support to Gabon under the Rapid Financing Instrument (RFI) to alleviate balance-of-payment pressure stemming from the spread of the coronavirus disease 2019 (COVID-19) and a sharp decline in oil prices. IHS Markit expects Gabon's external and fiscal positions to deteriorate sharply in the short term. Assuming an oil price of USD28 per barrel, we expect Gabon's oil export receipts to fall from an estimated USD4.65 billion in 2019 to around USD3.02 billion in 2020, representing a 35% contraction. Slowing growth in Asia and Europe, and in Gabon's other wood, palm oil, rubber, and manganese consumer markets because of the virus shock suggests that the normalization of the export market is likely to be very slow. (IHS Markit Economist Archbold Macheka)

6. Most European financial markets were closed today in observance of Easter.

1. As COVID-19 cases have risen sharply among the foreign workers communities in Singapore, the risk of serious production disruption at Singapore's yards has increased significantly. Singapore offshore yards, Keppel O&M, Sembcorp Marine and Dyna-Mac are heavily dependent on foreign workers for the construction of their projects. As of 12 Apr 2020, there are 792 cases among foreign labor dormitories and construction site clusters in Singapore, accounting for 31% of total cases in the country. It is estimated that at least 25,000 workers are housed at the affected dormitories. (IHS Markit Upstream Costs and Technology's Jessica Goh)

2. California based AutoX has set up an autonomous vehicle (AV) operations facility in Shanghai (China) to support the development of robo-taxis, reports Caixin Global. The 80,000-square-foot facility will serve as an AV data hub and house tools for operating a large fleet of AVs. AutoX has partnered with Shanghai's authorities, announcing plans to introduce a fleet of 100 robo-taxis in the city's Jiading district in 2020. The company has also received permits from Shenzen and Guangzhou in China and California in the US to test its AVs. (IHS Markit Automotive Mobility's Surabhi Rajpal)

3. South-Korean automotive component supplier Hyundai Mobis plans to establish a technical centre in India to develop software for autonomous vehicles (AVs), reports Yonhap News Agency. Hyundai Mobis is a major supplier of automotive modules, systems, and components for the automotive industry. It is now focusing on emerging fields such as autonomous vehicles, electrification, and connectivity to expand its offerings to the automotive industry. The company had announced on 14 January plans to invest KRW9 trillion (USD7.8 billion) to develop future car technologies over the next three years. (IHS Markit Automotive Mobility's Surabhi Rajpal)

4. China's consumer price index (CPI) was 4.3% year on year (y/y) in March 2020, down 0.9 percentage point from the previous month, according to the National Bureau of Statistics (NBS). The month-on-month (m/m) CPI reported a 1.2% deflation, compared with a 0.8% inflation a month ago and marking the largest drop since the end of 2002. (IHS Markit Economist Yating Xu)

5. New vehicles sold on a wholesale basis in China fell by 43.3% y/y to 1.43 million units during March, while production decreased by 44.5% y/y to 1.42 million units, according to preliminary data from CAAM. March sales results released over the past few days all indicate a gradual recovery in auto demand from February. However, a rebound in March offers limited reassurance over strong growth during the rest of 2020. <span/>(IHS Markit AutoIntelligence's Abby Chun Tu)

6. China's work resumption rate in large industrial enterprises rose to 97.1% on national average based on latest data until 13 April, with on average 84% of workers returning to their posts. Among all 31 mainland provinces, only Tibet has reported work resumption rate of below 90%. Meanwhile, the resumption rate in small firms has been gradually catching up, with more than 80% of SMEs having restarted operations as of 10 April, according to the MIIT. (IHS Markit Economists Yating Xu and Lei Yi) 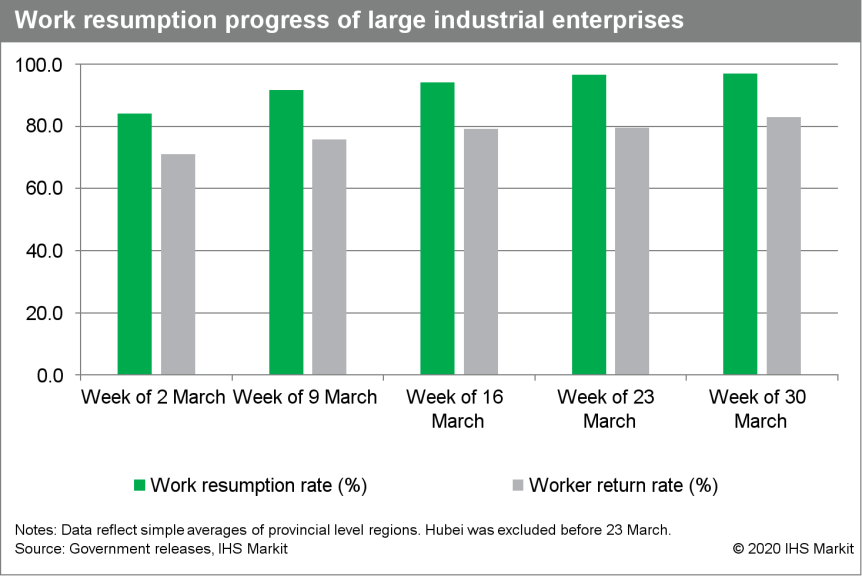 7. China's Passenger transportation: Daily passenger trips (by railway, road, waterway and civil aviation) continued to show around 60% y/y contraction compared with daily average level in March 2019, but the contraction slowed from over 80% in February. The total passenger-kilometers by civil aviation and railways declined over 40% in February. Notably, passenger trips improved during the past weekend due to the three-day Tomb Sweeping Day holiday. (IHS Markit Economists Yating Xu and Lei Yi) 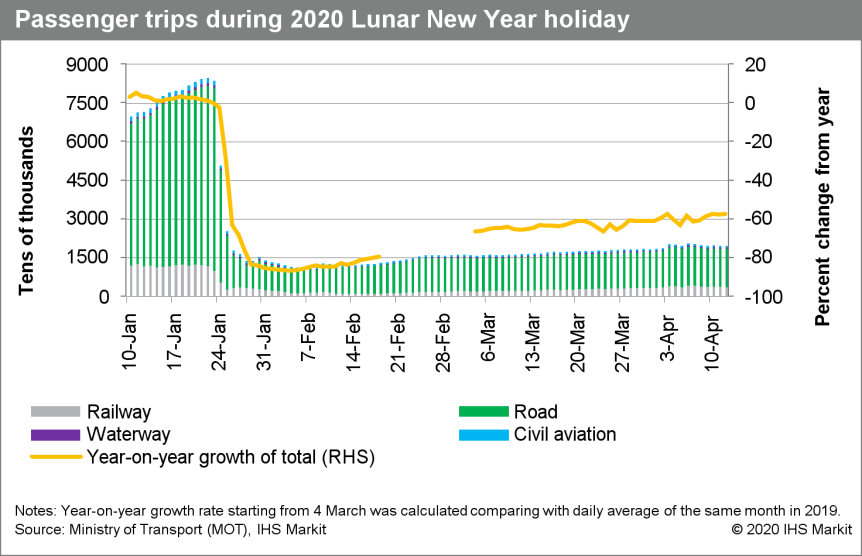 8. Sales of new vehicles in Pakistan plunged 69% year on year (y/y) in March due to the coronavirus disease 2019 (COVID-19) virus-related lockdown in the country, according to data released by the Pakistan Automotive Manufacturers Association (PAMA). Volumes totaled 7,264 units last month, down from 23,370 units in March 2019. (IHS Markit AutoIntelligence's Isha Sharma)