Credit index trading activity in the first half of 2021 remained strong, even though most products traded less than the historic record levels in H1 2020, which was driven by coronavirus volatility. The exception was the corporate bond index futures that continued to see record breaking volumes across HY and IG.

The fixed income ETF market continued to grow in the first half of 2021, increasing AUM by 14% to above $1.6 trillion. Global inflows surpassed $125 billion, as investors continue to favor fixed income ETFs for their robustness and as a source of liquidity and continuous price transparency.

The iShares iBoxx $ Investment Grade Corporate Bond ETF (LQD) closed the first half of the year with $40 billion in total AUM, which was 22% less than the beginning of the year. This was due to $14 billion of net redemptions (vs. $16 billion inflows in June last year) which was partially offset by $2.6 billion in capital appreciation. However, LQD AUM remained above the H1 2019 AUM of $36 billion.

The iShares iBoxx $ High Yield Corporate Bond ETF (HYG) saw its total AUM slide from $23 billion in January to $20 billion in June, a decrease of 13% fueled by $6 billion of outflows, offset by $2.6 billion in capital gains. During the same period last year AUM was up by 51%, including $8.6 billion of net flows. HYG's AUM remained relatively flat compared to its H1 2019 AUM of $19 billion. 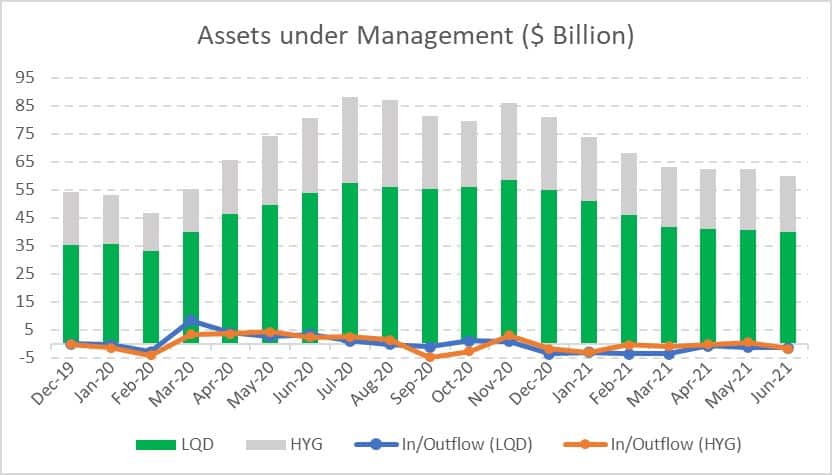 The iShares Euro Corporate Bond Large Cap UCITS ETF (IBCX), which tracks the performance of an index composed of large and liquid EUR denominated investment grade corporate bonds, ended mid-year with a total AUM of $3.4 billion, a YTD decrease of 24% driven by $1 billion in outflows (vs. +$0.8bn in H1 2020) and $0.1 billion in capital losses. 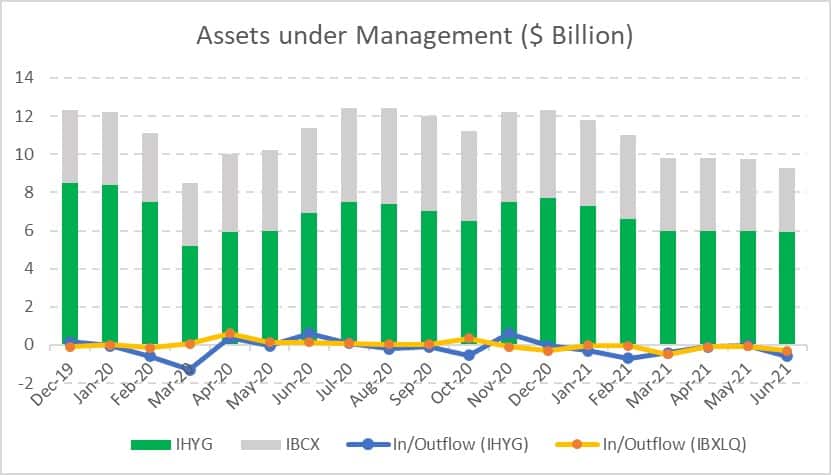 The Cboe iBoxx iShares $ High Yield Corporate Bond Index Futures (IBHY) and Cboe iBoxx iShares $ Investment Grade Corporate Bond Index Futures (IBIG), the first futures ever to be benchmarked to the performance of a broad range of liquid U.S. corporate high yield and investment grade bonds, reached record volumes of $11.7 and $7.9 billion respectively in the second quarter of the year.

IBHY traded close to $4 billion in June, by far the biggest month on record, bringing the YTD volume up to $22 billion - more than 2.9x the volumes during the same period in 2020. IBIG, after a slow start in 2019, impressed with over $13 billion volume traded YTD. $3.3 billion traded in May, which set a record high and contributed to the impressive $7.9 billion recorded during the second quarter of the year. 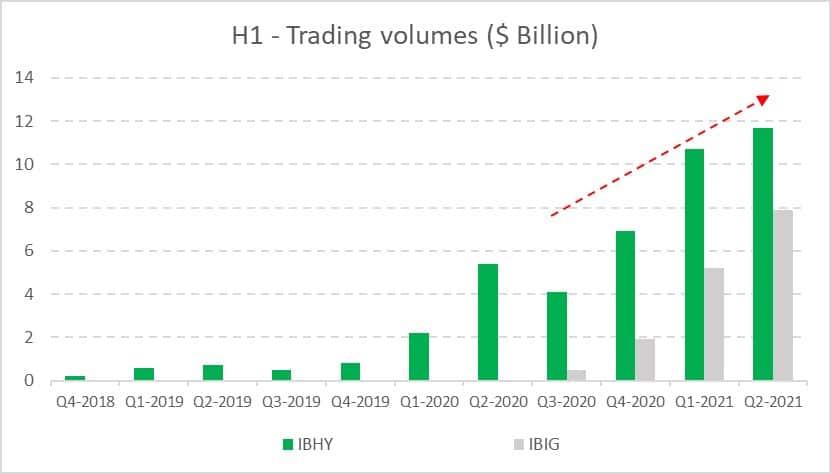 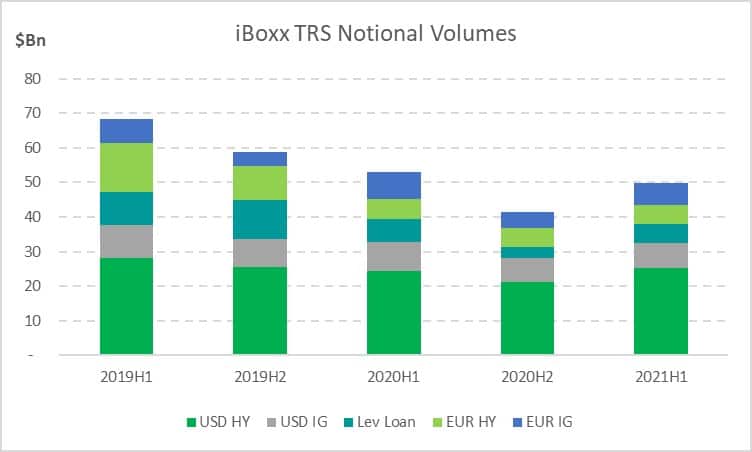 Total untranched CDS index volumes across all CDX and iTraxx Europe indices were $7.3 trillion in H1 2021, which was $3.3 trillion less than the same point last year. However, H1 2021 untranched activity was $413 billion greater versus the first half of 2019. 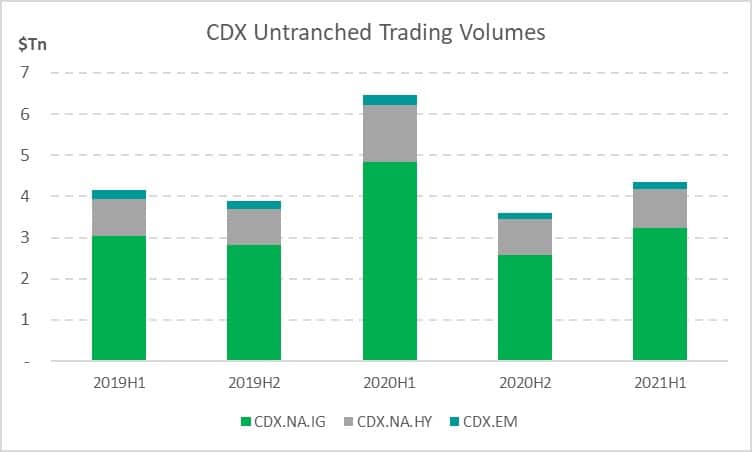 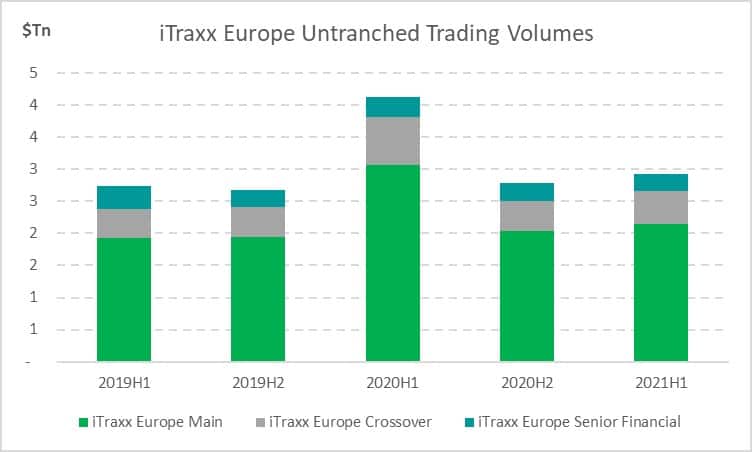 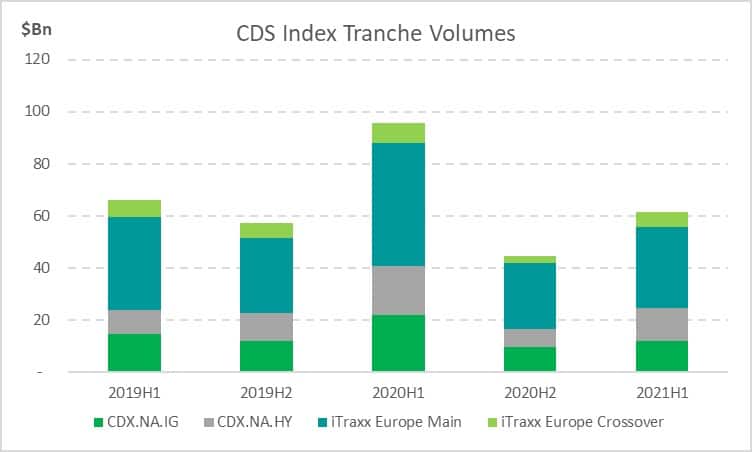 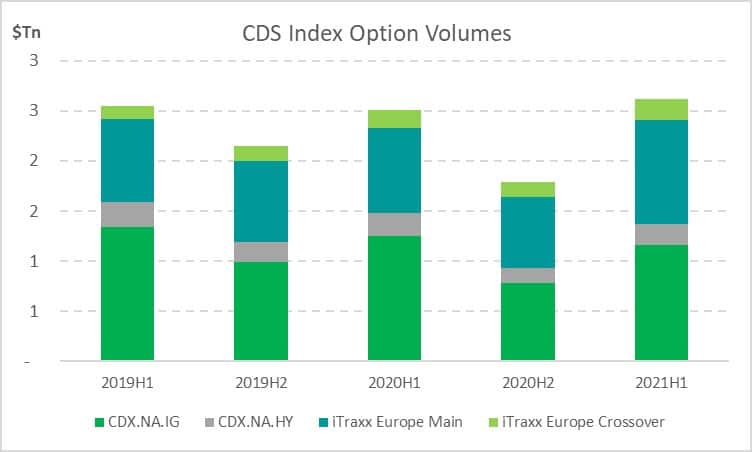 H1 2021 activity reflects a less volatile credit environment than what the world experienced a year ago. Volumes have generally been in line or higher than the same period of 2019 while trending above long term averages, with growing adoption for the corporate bond index futures continuing to post record breaking activity. The growing diverse array of tradable credit products continue to provide liquidity and exposure to key global markets, especially in times of volatility.