IHS Automotive senior analyst Ben Scott has compiled a new fuel cell electric vehicle (FCEV) report, forecasting growth for the segment through 2027. More automakers are planning to come to market with FCEVs over the next decade, increasing availability and leading to annual production of 69,000 units per year by 2027, up from a forecast production of fewer than 3,700 in 2016.

"Recently there has been an increasing focus on battery electric vehicles [BEVs] and battery technology, but FCEVs could also play a key role in zero-carbon mobility," said Scott. "We are now in the third wave of FCEVs from OEMs and more hydrogen refuelling infrastructure is beginning to be rolled out. This could be a 'now or never' situation for FCEVs in mass market mobility."

Only three FCEVs are currently available for consumers to purchase/lease - the Toyota Mirai, Hyundai ix35/Tucson, and Honda Clarity - and each is only available in select markets. But during the next 11 years the number of available FCEV models is expected to climb to 17 as more OEMs add FCEVs to their product portfolios.

In the near term, most FCEV production is expected to be in Japan and Korea, as Honda, Hyundai, and Toyota lead the way to commercialisation. By 2021, however, European FCEV production is forecast to edge ahead of Japan/Korea production as BMW and Mercedes-Benz launch FCEV offerings. In 2023, Audi and VW are forecast to follow. By 2027, Europe is projected to hold a leading share of FCEV production, with an output of about 52,000 units.

While North American manufacturers are expected to participate in the market - and Ford and GM both have long-term FCEV development programmes - they are expected to lag others in advancing to commercialisation. According to Scott, this indicates a shift in regional momentum for FCEVs as OEMs look to meet emissions targets. While the compound annual growth rate (CAGR) for global FCEV production between 2016 and 2027 is forecast at nearly 31%, production of 69,000 FCEVs will represent a small fraction of the 114 million vehicles forecast to be built in 2027.

Scott also notes that comparisons are made between BEVs and FCEVs. Current-generation FCEVs have similar benefits to conventional cars - short refuelling times and long range - that most BEVs on the road today lack. "Refuelling habits with an FCEV will be very similar to that of a conventional car," said Scott. "This will definitely help with customer acceptance of FCEVs."

But battery technology is improving each year, with USD/kWh decreasing, while energy density rises. Although hydrogen currently has the advantage of short refuelling times and long range, battery technology is catching up. IHS believes the FCEV market has a window of opportunity to establish itself as a serious contender in long-term zero-carbon mobility. If the FCEV market has not reached moved past the early adopter stage in the next 20-25 years, however, we expect FCEVs to remain only in niche applications.

Along with the issue of building a wider network of refuelling stations, truly sustainable zero-carbon mobility requires that the hydrogen used to refuel FCEVs come from renewable sources (green hydrogen). This can be achieved using an electrolyser and electricity from a renewable source (such as solar PV or wind turbines). Currently 96% of the hydrogen market is derived from fossil fuels (brown hydrogen) using feedstocks including coal, natural gas, and liquid hydrocarbons. Green hydrogen will come at a cost premium over hydrogen from an existing plant such as a steam methane reformer. "There is no market today to justify that premium and that market needs to be created to encourage investment in upstream hydrogen production capability," said Scott. "There is currently a trade-off between hydrogen carbon footprint and cost."

The FCEV market's growth could also influence cost and supply of platinum, which is used as a catalyst in fuel cells. If FCEVs become a key player in long-term zero-carbon mobility, demand for platinum will increase. "In current-generation FCEVs, the amount of platinum used is five to six times that of a diesel catalytic converter, but the aim is to reduce the amount of platinum used when fully commercialised and there is R&D into non-noble metal catalysts," Scott said. But FCEVs could still offer a good opportunity for platinum producers, especially considering the pessimistic sentiment around long-term demand prospects for diesel engine vehicles and hence platinum automotive catalyst demand.

IHS senior analyst Ben Scott says the FCEV market has a window of opportunity to establish itself as a serious contender in long-term zero-carbon mobility. If the FCEV market has not moved past the early adopter stage in the next 20-25 years, however, we expect FCEVs to remain only in niche applications. 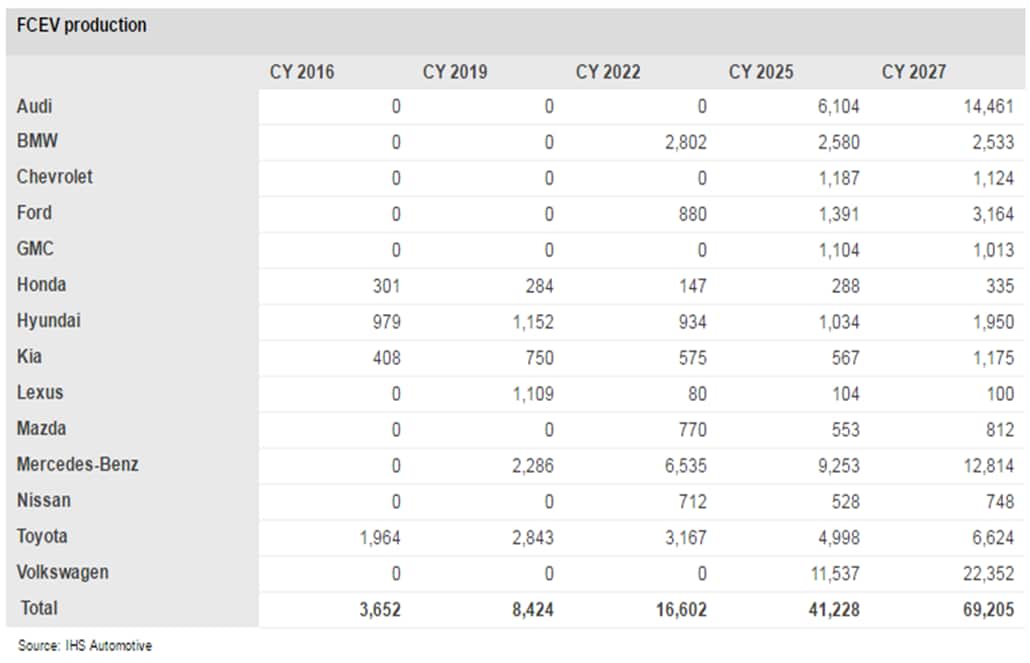 IHS also currently forecasts that only a handful of automakers will take part initially, even though several have had FCEV R&D programmes, including vehicles in test fleets, for well over a decade. In 2016, as we noted, there are essentially only three FCEVs available, and these are offered only in very small numbers and limited locations. In 2018 we expect an additional two products and not before 2020 do we foresee the total reaching 11. Production is projected to post very slow and limited growth through 2020 then a significantly increase in the next decade.