Annual clean energy investment in emerging and developing economies needs to increase by more than seven times, from less than $150 billion in recent years to over $1 trillion by 2030, for the world to be on a path to reach net-zero emissions by 2050, according to a report from the International Energy Agency (IEA) and the World Bank.

"Financing Clean Energy Transitions in Emerging and Developing Economies," published on 9 June, is the IEA's latest contribution to its recommendations on how to reach the target of the Paris Climate Treaty of a temperature increase of just 1.5 degrees Celsius compared with pre-industrial levels. The report follows its "Net Zero by 2050 Roadmap" in April.

In the roadmap, IEA said global clean energy investment must rise to $4 trillion per year by 2030 and be maintained at that level through 2050—more than three times the current rate.

Now, in this new report, IEA and the World Bank have taken a deeper look at the lack of investment in the developing world and the benefits that would accrue globally if a course correction is made.

"The only way to move along that path is dramatic changes in the energy sector and a surge in clean energy investment," said Tim Gould, co-lead author of the report and head of the IEA Division for Energy Supply Outlooks and Investment. "Countries are not starting this journey from same starting point. In particular, emerging countries need the financing and knowhow to build their [energy systems] in a sustainable way."

Emerging and developing economies—primarily in Asia, Africa, and Latin America—currently account for two-thirds of the world's population, but only one-fifth of global investment in clean energy, and one-tenth of global financial wealth, IEA and the World Bank said.

But they project that emissions from emerging economies will grow by 5 billion mt per year by 2040 to nearly 15 billion mt/year, if current policies and economic conditions persist (the STEPS, or Stated Policies Scenario, in the graph below). 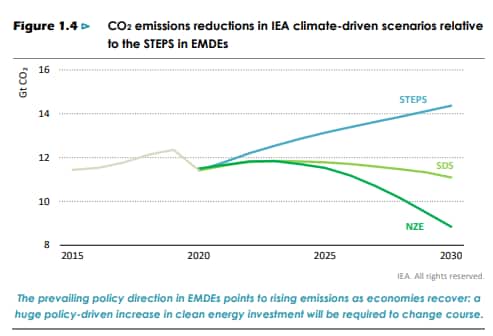 The projected rise in emissions comes from a combination of population growth and energy use growth per-capita, Gould explained. Developing nations, on average, produce about 2 mt of CO2 per capita each year, compared with about 8 mt CO2/year in most of the mature economies. But the developing countries are catching up. "Electricity consumption in emerging and developing economies is set to grow around three times the rate of advanced economies," the report stated.

Importantly, however, IEA found that investing in the developing world is especially cost-effective at managing emissions, at about $5/mt of CO2 avoided, or half the cost in advanced countries. There are many reasons for this phenomenon, including the ability to plan installations at ideal locations in a less-developed system, and the ongoing efficiency improvements expected in renewable energy.

The problem is that investments are not being made sufficiently in the developing world. "There's a major gap in today's investment flows and what would be required to put us on track to net-zero 2050. That gap is visible everywhere, but especially in emerging countries," Gould said. "If we do not address this, we risk [developing nations] becoming 'the fault line' in reaching net zero."

Or, as explained by Michael Waldrin, the other primary author of the report and IEA's senior energy investment analyst, the developing countries are set to be the dominant source of growth in emissions in upcoming decades. "The goal should be to help them avoid locking-in of high carbon energy choices," he said.

No shortage of money

On the positive side, IEA and the World Bank say that investment in clean energy by governments and private industry continues to grow. The problem is where it is being dispersed and the lack of a readily accessible "pipeline" of projects in the developing world.

"There is no shortage of money worldwide, but it is not finding its way to the countries, sectors, and projects where it is most needed," said Fatih Birol, IEA executive director, in a press conference tied to the release of the report.

Global financial wealth exceeded $200 trillion at the start of 2020, and during the year, investments in sustainable debt reached records levels. But only 5% of that sustainable debt is in the developing world, Birol said.

In fact, clean energy investment in the developing world has been flat since 2014, actually declining in some years. 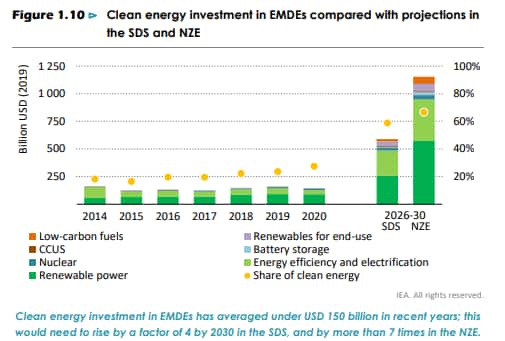 The problem is two-fold, Birol explained. First, government finances in the developing world, which were never strong to begin with, have been harmed further by the economic downturn due to the COVID-19 pandemic. This has limited their abilities to finance clean energy and the infrastructure needed to support it such as power lines and building efficiency investments.

Second, private capital is available, but it views the developing world as riskier than investments in the EU or the US, for example, and demands higher returns. This raises the cost of financing for the nations that hold the key to tamping down future CO2 emissions growth.

The answer is a coordinated, multilateral approach that begins with government policy, but leans heavily on private investment. "Governments need to give international public finance institutions a strong strategic mandate to finance clean energy transitions in the developing world," Birol said.

In the report, IEA and the World Bank say that 70% of the capital for clean energy in the developing world must come from private investors. This is a contrast to current practices, in which governments or state-owned energy companies have been the largest investors. Waldrin said that state-owned enterprises will still play vital roles in developing power grids and investing in hard-to-decarbonize sectors, but their most important role will be "catalytic ... by attracting investment from the private sector."

The 230-plus page report includes dozens of recommendations and outlooks based on three scenarios: STEPS, Sustainable Development (SDS), and Net Zero Emissions (NZE). Under the SDS, the approximately 800 million people in the world without access to electric power will have it by 2030; and advanced economies reach net zero by 2050, China by its stated target date of 2060, and emerging economies by 2070. Under the NZE scenario, both the energy access and net-zero goals are met worldwide by 2050.

Here are the highlight takeaways:

One finding throughout the report is that the cost of capital for emerging economies is so high—possibly as much as seven times the cost for projects in the developed world—that only concerted international action can solve the problem. The reasons range from macroeconomic instability and currency volatility, to concerns over the sanctity of contracts, to the pressures that governments place on state-owned energy enterprises. At the same time, because the countries are less economically developed, their private sectors have limited capital for lending.

"The international financial system lacks a clear and unified focus on financing emissions reductions and clean energy—particularly in the developing world. This needs to be done across multiple aspects of energy transitions, with coordinated finance from donors and the provision of technical assistance on the ground. Increasing the effectiveness of the delivery channels for investments is critical," it said.

The message seems to be heard, but with caution about the complexities. "We support the direction of this new report, as well as its clear acknowledgment of the massive imbalances that make decarbonization in the developing world more challenging," said Lily Odarno, the director of energy development and climate in Africa for the Clean Air Task Force, a Boston-based nonprofit. "But ultimately, it is important that these countries, particularly the least developed ones in Africa, have the agency to develop strong economies. This will position them to contribute meaningfully to an energy transition that is tailored to their unique resources and energy needs."

With the G7 meeting this week in southwest England, Demetrios Papathanasiou, World Bank global director for energy, said the report sends a message that developed world government leaders should heed: "A massive surge in clean energy investment in the developing world can put emissions on a different course."