The prospect of global warming leading to ice-free navigation in the Arctic Ocean raises commercial opportunities as well as the risks of military conflict.

The Arctic has been gradually warming since the middle of the 19th century, and since 1950 this trend has accelerated. It has heated up twice as rapidly as the rest of the planet, and average temperatures are now higher than at any time in at least the last 2,000 years - and probably much longer - according to a 2012 report by the Arctic Monitoring and Assessment Programme (AMAP), a working group of intergovernmental organisation the Arctic Council. The most visible and immediate consequence of this warming is a decline in sea ice, especially in the summer, raising hopes for increasingly easy access to resources and shipping routes in the region, but also raising geopolitical concerns. 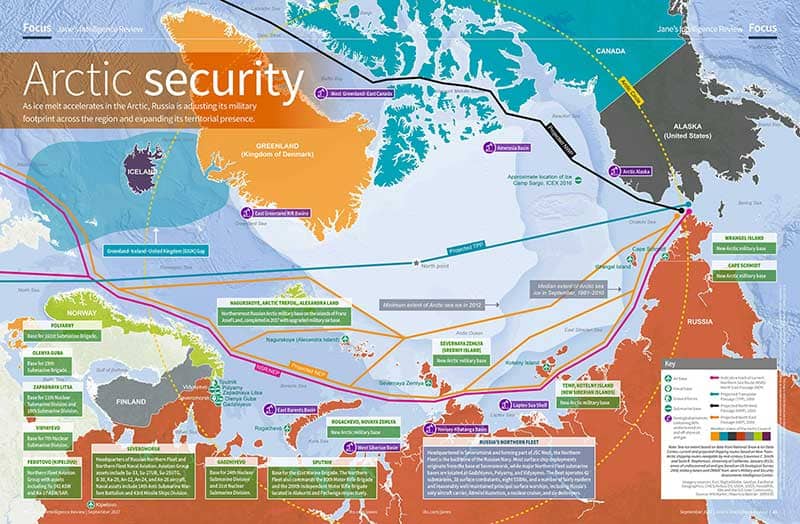 The Intergovernmental Panel on Climate Change (IPCC) reported in 2013 that the area of the Arctic Ocean with year-round ice cover fell by 11.5% per decade between 1979 and 2012. According to the US National Aeronautics and Space Administration, this rate is accelerating, and is now 13.3%. The maximum ice extent in winter has decreased more slowly - between 3.5% and 4.1% per decade - but April 2017 was a seasonal record low. Moreover, the 2016 summer minimum ice extent was the second-lowest on record. The melt season has also been lengthening: the duration of ice-free conditions in the region between the East Siberian Sea and the western Beaufort Sea, for example, increased by nearly three months between 1979 and 2012. 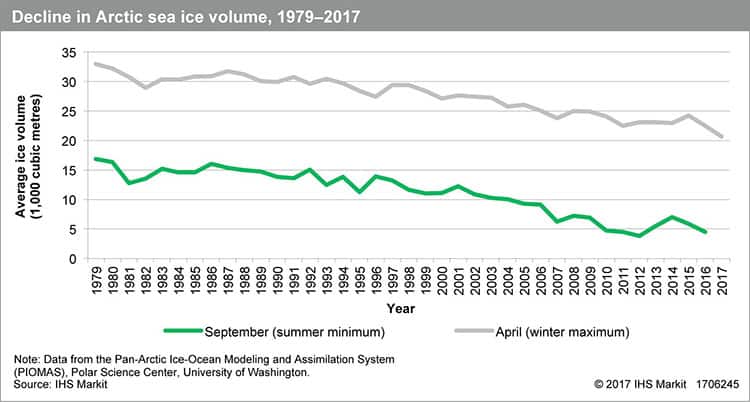 There are three potential shipping routes connecting the Bering Strait and the North Atlantic through the Arctic: the Northwest Passage (NWP) through the Canadian archipelago; the Northeast Passage (NEP) along the Russian coast, which includes the Northern Sea Route (NSR), an administrative entity comprising seaways under Russian jurisdiction between Novaya Zemlya archipelago and the Bering Strait, but excluding the Barents, Pechora, and White seas; and a direct Transpolar Passage (TPP). None of these routes comprises discrete sea lanes, but rather broad and, in places, overlapping corridors consisting of multiple alternative channels whose navigability depends on varying ice conditions.

At present, the TPP is only navigable during the year by heavy icebreakers or submarines, and the other routes are only open inconsistently during the summer. Scott Stephenson and Professor Laurence Smith of the University of California, Los Angeles, reported in March 2013 that the probability of a technically feasible transit of the NSR by non-ice-strengthened vessels in any given year rose from 40% in 1979-2005 to 61% in 2006-15, and will reach 98% by 2040-59 under high-emissions scenarios.

The probability of such a transit of the NWP will increase from less than 15% currently to 50% by 2050. Choosing whether to ship through the passage in summer, according to Smith, "will become a coin toss", but "this will never be a year-round operation". Along the TPP, the ice will be sufficiently thin in summer for "moderately capable icebreakers [Polar Class 6] to go where they please", said Smith.

These routes potentially all offer significant savings in time, distance, and cost for shipping operating between Asian and European or North American ports. Various economic studies - none of which is judged by Jane's to be entirely comprehensive or authoritative - collectively suggest that fuel prices, insurance, icebreaker fees, and construction costs for ice-capable ships are critical variables in determining whether such savings can be achieved. 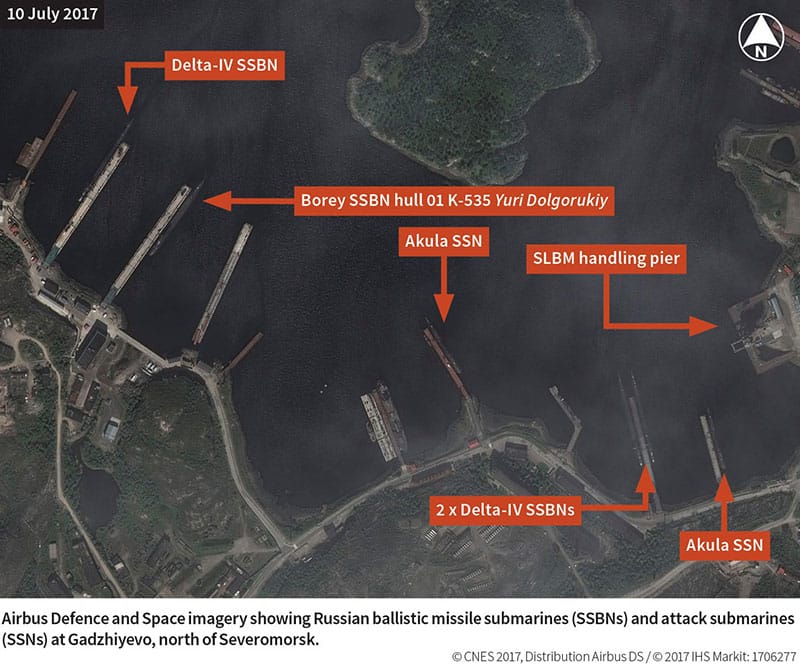 Five issues - resource competition, underwater conflict, the Greenland-Iceland-UK (GIUK) gap, SLOCs, and a spillover crisis - may drive increased strategic competition in the Arctic. The likelihood of such competition escalating into crisis and conflict remains low, but the consequences of any such escalation would be very high, given the nature of the stakeholders in the region and the significance of the issues at stake.

Globally, countries are using the sea to a greater extent to boost economic strength, both through traditional resources such as oil, gas, and fisheries, and increasingly through other resources such as minerals. Access to resources below the surface, on the sea-bed, and below the seabed will become increasingly critical. In the Arctic, many resources lie within established territorial waters, but competition for them may become increasingly acute for several reasons: more resources will become available as climate change continues; Russia will wish to secure access to Arctic resources; and there may be increasing interest from non-littoral Arctic members, such as China and the European Union. 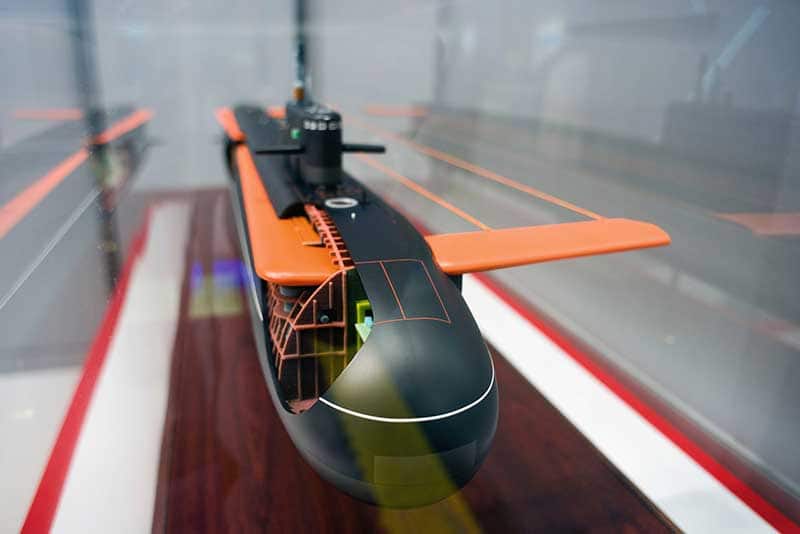 In terms of military activity, submarine and anti-submarine operations, including MPA deployments, are a primary focus for both NATO and Russia. To project power and protect territories, submarines are a central element of the Arctic's strategic balance, and naval competition is already under way beneath the ice; the ability to operate under ice will continue to provide strategic advantage.

Overall, the risk of conflict in the Arctic remains low, but the consequences of any crisis would be high. The strategic importance of the Arctic will continue to grow, despite the uncertainties surrounding climate change and ice-melt projections. Even without the potential economic benefits and the need to protect them, increasingly ice-free conditions mean that there is also a greater potential for confrontation sparked by issues outside the region.

Although the declared aspirations of Arctic states are to develop and maintain the North as a zone of peace, stability, and prosperity, the absence of institutionalised governance structures or a regional security architecture will continue to make this a major challenge. Officials from littoral Arctic countries routinely stress that resolving the region's security issues is not a military matter, but military presence in the region is undoubtedly prominent and growing.

Arctic stakeholders - increasingly focused on regional security issues - appear to be concerned about the military and security balance, and the twin policy drivers of de-escalation and avoiding a military build-up are likely to hold in the immediate future. However, in the medium term, serious concerns will remain in the West about the direction of Russia's Arctic military development - particularly if Russia sees an opportunity in NATO's focus elsewhere to put down markers relating to its interests.