U.S. markets remained cautiously optimistic in June, with volatility stemming from concerns around inflation and central-bank policy. As gauged by positive data, the U.S. economy continued to improve but at a pace inadequate to warrant the Fed to accelerate its bond purchase tapering timeline. Meanwhile, the U.S. treasury curve flattened as the 2s10s spread narrowed 24 bps to 120 bps, and the dollar advanced higher.

Asian economies also exhibited positive momentum, with the regional IHS Markit PMI for May remaining above 50, which signals economic expansion. However, the risk appetite for USD Asia corporate bonds was mixed, where yield change was mostly driven by spread change for high yield bonds (+0.71% change in yield and +62 bps in spread), but not so for high grade.

This month the iBoxx Asia ex-Japan index gained 0.24%. Longer-dated investment grade bonds made strong gains, but the overall index return was largely dragged down by B and CCC-rated high yield bonds, which registered severe losses. 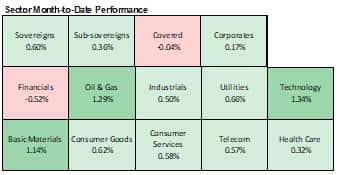 Within the top 7 markets (by market value) in the index, only China (-0.10%) returned a loss while all other markets performed well with Indonesia (+1.31%) leading the pack.

In the corporate space, Basic Materials, Oil & Gas and Technology sectors were the best performers. Financials is the only sector leading on the downside.

China USD bonds (-0.10%) continued their downward trend in 2021, after a small bounce in May. The June loss was solely contributed to by bonds in the China Real Estate sector, which declined 2.70%.

Of the 27 bonds removed from the rebalance:

There were four fallen angels captured this month (all belonged to the China financial sector).

Please refer to the Appendix for a breakdown of this month's insertions and deletions, and a list of fallen angels and rising stars recognised in 2021.

Malaysia expanded its notional base by USD 47.5 billion of long-dated bonds, after three of its bonds, with combined notional of USD 750 million, were either called or repurchased last month.

South Korea added 6 new bonds, all A-rated or above, with a total notional of USD 3.2 billion. Five of these bonds are short to medium-dated while the remaining one matures beyond 2041.