Weakness spread in the China real estate sector in November as yet another local property developer was unable to service its dollar bond obligations. With inflation remaining in the spotlight, investors were closely monitoring the movement of the US treasury curve, which flattened this month as the 2s10s spread narrowed 16bps to 91bps. Meanwhile, the US dollar appreciated against most Asian currencies in November.

Against this backdrop in November, the iBoxx USD Asia ex-Japan index posted a loss of -0.17%, falling for its third consecutive month. The index yield fell 5bps to 3.54% and the index spread rose less than 2bps to 218bps.

This month, Asia USD corporates outperformed sovereigns by 0.42%. From a rating perspective, longer-dated, A and higher rated bonds delivered strong gains, while the entire B and CCC rated segments recorded significant losses. 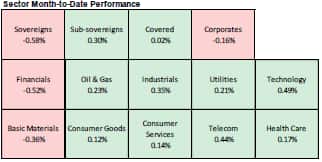 Among the largest 7 index markets, Hong Kong (+0.44%) and Singapore (+0.52%) were relative outperformers. Mainland China (-0.31%) was the worst performer mostly dragged down its real estate sector.

From the corporate sector perspective, only Basic Materials and Financials underperformed. All other sectors posted gains.

China USD bonds dropped for the third straight month, though less this month than in the prior two. Meanwhile, the China USD high grade bonds (+0.08%) outperformed high yield bonds (-1.71%) by a wide margin.

The China USD LGFV index and its sub-indices all recorded gains in November.

In December, 31 new bonds entered the index. Mainland China added 25 new issuances, making up slightly less than USD 12 billion (or close to 69%) of the new notional.

Of the 48 bonds removed from the index in October:

This month, two fallen angels were captured and they belonged to the Chinese Food & Beverage sector. Additionally, five rising stars were identified based on iBoxx implied credit rating methodology.

Please refer to the full commentary for a breakdown of this month's insertions and deletions, and a list of fallen angels and rising stars recognised in 2021.

A majority of the new bonds in the mainland China market were short-to-medium dated, BBB or A- rated, and were from the financials and industrial sectors. Hong Kong added a 10-year, AA-rated government bond, while removing two medium-dated corporate bonds that were issued by the local banks