Additional stimulus talks and the pace of vaccinations underpinned the broad direction of the U.S. and global markets in March. Economic activity gained steam and equity markets trended higher. With sizable fiscal stimulus, easy monetary policy, and a transition towards (vaccine-driven) business reopening, some investors remained cautious about future growth expectations and the speed of reflation.

This month, longer duration USD Asia sovereigns outperformed corporates by 55 bps. Within credits, high grade bonds moved lower (-0.48%) while high yield bonds remained flat. Losses were observed across the mid to long end of the curve with a concentration in the 7+yr segments. Only the CCC-rated segment recorded gains in each of its maturity buckets. 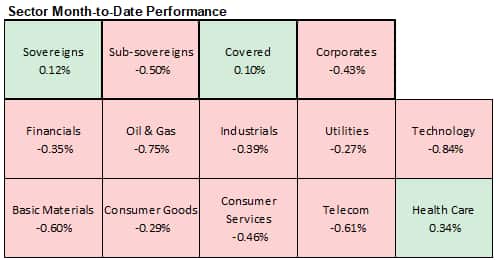 The top 7 markets in the index, by market value, were in negative territory in March, but the losses were limited to less than 0.50%.

China USD bonds trended down for the second straight month, as its index and all sub-indices closed lower. China high yield (-0.39%) outperformed both China high grade (-0.52%) and China sovereigns. The China Real Estate sector, unable to build on its positive performance from February, slipped this month and lost -1.10% year-to-date. China LGFV (-1.46%) suffered the largest loss in this market, with both its high grade (-1.54%) and high yield (-1.23%) segments delivering negative returns.

Forty-six new bonds were added to the index in April. Mainland China, Hong Kong SAR and India added 33 new issuances, making up over USD 15 billion (or 70.5%) of the new notional.

Of the 31 bonds removed from the April rebalance:

There was one fallen angel captured last month and it was issued by a financial services company called Bi Hai Co Ltd.

Please refer to the full report for a breakdown of this month's insertions and deletions, and a list of fallen angels and rising stars recognised in 2021.