The rise of electric vehicles and their projected impact on demand for fuels has been sufficient to cause concern in the oil and gas industry, with low- or no-emission vehicles making inroads in both consumer and commercial markets. To date, electric vehicles have been nearly synonymous with battery-powered vehicles, specifically lithium-ion batteries. Battery electric vehicles (BEVs) have shown aggressive growth in recent years, with more than three million on the road as of 2018 and ownership projected to expand as high as 90% of all vehicles in use in Western countries by 2040. However, hydrogen fuel cell vehicles (HFCVs) may be poised to become an aggressive competitor in a relatively short period of time. The governments of South Korea, Japan, Germany and the US state of California have all announced large-scale programmes to increase both the number of HFCVs operating (currently around 11,000 cars and 20,000 forklift trucks worldwide) and deploy the required fuelling stations and infrastructure to support them. South Korea's President Moon Jae-in plans to invest heavily in what he termed the "H2 economy", including emphasis on the production of fuel cell vehicles. In Japan, eleven large corporations have formed the Japan H2 Mobility (JHyM) cooperative, aiming to foster the deployment of hydrogen stations throughout the country, which already holds the highest number of public stations at around 100. The German counterpart, H2 Mobility Germany, is working to bring the total number of H2 stations in the country to over 100, up from the 69 already in operation. Although California lags behind in the overall number of fuelling stations (36), it has the highest number of HFCVs on the road, with Honda, Toyota and Hyundai marketing vehicles and BMW, Mercedes-Benz and Audi reportedly preparing to follow suit.

Despite advances in efficiency and a growing network of charging stations, there are some hurdles lithium-ion battery-powered vehicles have so far been unable to overcome. The batteries and associated equipment are heavy, requiring a steep trade-off between range and vehicle weight. Charging takes more time than an average consumer is willing to wait (anywhere from 30 minutes for a top-off at the most advanced charging stations to more than a day with home outlet chargers). Hydrogen fuel cell vehicles are in the very early stages of commercial deployment but could offer a compelling alternative. Hydrogen has a vastly higher specific energy density than lithium-ion - one kg of hydrogen can store 236 times more energy than a kg of lithium-ion - allowing for both lighter weight storage and faster fuelling times (mere minutes for a full tank). However, energy losses can be very high through the hydrogen life cycle (see text box for more details), which, despite utilising mature, well-understood procedures, involves more complex processes than battery electric, leaving HFCVs with about half the "well to wheel" efficiency of BEVs. The advantages of HFCVs are more likely to be realised in vehicles with higher weights and longer trip time to contend with, such as buses and semi-trailer trucks. 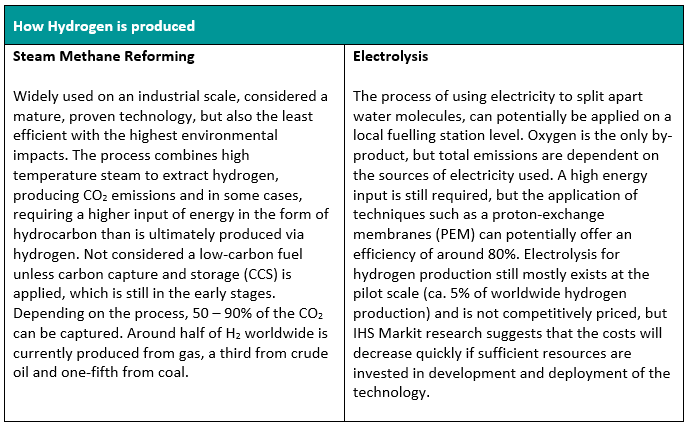 Figure 2: How Hydrogen is produced

HFCVs also have the advantage of not being dependent on lithium, an abundant but increasingly in-demand resource due to the ubiquity in batteries across the consumer range. The extra CO2 emissions involved in the sourcing and recycling of the lithium across a vehicle's life cycle, in addition to varied emissions profile of the grids used to power the vehicles, have been major talking points by critics who say that electric vehicles are not necessarily as environmentally friendly as claimed. Thanks to refined processes that come with a proven technology, modern internal combustion engine-powered vehicles can hold their own surprisingly well in terms of the overall involved emissions over their product cycle. Recent studies like one by the IFO Institute have even estimated a CO2 emissions disadvantage for an electric vehicle in its lifetime compared to a diesel automobile, due to concerns about component sourcing (and disposal) and power generation. However, critics of such studies retort that they grossly underestimate the analogous emissions in upstream fossil fuel production and that power sources are also trending to become more renewable across the world, so the advantage for fossil fuels in mobility may go from debatable to non-existent as batteries are produced with increased efficiency and the power mix evolves.

Hydrogen fuel cells are not free of sourcing concerns, most notably due to the presence of platinum among their components, but the market for the mineral is currently oversupplied and less likely to strain prices. The World Platinum Investment Council appears optimistic about the demand being met and recently projected a rise in the worldwide HFCV fleet from around 11,000 today to 400,000 by 2025, combining targets and forecasts in California, Western Europe, China, Japan and South Korea. More visionary predictions by proponents of the technology like the Hydrogen Council see the potential for a quarter of all passenger vehicles, nearly a third of all trucks and a quarter of buses running on hydrogen fuel cells by 2050. Multiclient studies by IHS Markit focused on Europe and California also forecast a significant share of hydrogen in the mobility sector over the same timeframe. Majors players like Shell, Total and OMV are investing in fuelling networks, but the need for new infrastructure will remain a challenge, with around 230 hydrogen fuelling stations currently operational worldwide and a projected rise to only around 1,400 by 2025. By comparison, today there are more than 200,000 public electric car charging stations in China alone, not to mention the added convenience for consumers of being able to charge one's car at home.

HFCVs are also not competing against static goal posts, as BEVs are undergoing near-constant advances and improvements. The newest charging technology by Tesla reportedly adds 100 km in driving range to its Model 3 in five minutes, which already brings refuelling times into the range of tolerable for most consumers, and the uptake and improvements will accelerate as electric vehicles grow in presence. Tesla's Elon Musk is no fan of fuel cell technology, having notoriously called it "fool cells" and stated that "success was simply not possible". Reaching a price advantage over BEVs (which can only come through economies of scale and mass production) may prove tricky, as HFCVs are fighting for a niche section of an already limited market. Even the CEO of Toyota has diffused expectations of a battle for the consumer vehicle market, stating, "Elon Musk is right - it's better to charge the electric car directly by plugging in," but adding that Toyota sees a place for HFCVs in the market, "We don't really see an adversary 'zero-sum' relationship between the [battery powered] and the hydrogen car. We're not about to give up on hydrogen electric fuel-cell technology at all."

Illustrating its commitment to HFCVs, Toyota is planning to roll out a fleet of 10 hydrogen-powered fuel cell heavy-duty Kenworth trucks to serve the ports of Los Angeles and Long Beach in California. The trucks will hit the road in the fourth quarter of 2019, partially funded by a grant from the California Air Resources Board, aimed at reducing the state's emissions of carbon and other pollutants. Passenger HFCVs have begun to make an entry in markets like California, but their commercial counterparts may stand to have an equally resounding impact on the transport industry. Companies such as Phoenix-based Nikola Motors are working to roll out a fleet of "Heavy Duty" fuel cell vehicles, which it claims can compete with diesel-powered semi-trucks. The company reports that it has booked 13,000 (non-binding) advance truck orders and plans to complete a network of 700 truck-sized fuelling stations across the United States and Canada by 2028. The start-up has partnered with industry heavyweights Toyota, Hyundai and Shell to standardise hydrogen-fuelling components that could get fuel-cell electric trucks on the road faster.

Heating, power and energy storage are other avenues for hydrogen to stake its claim in the global economy. Although HFCVs are among the higher-profile results of hydrogen-based innovation, opportunities exist in sectors including decarbonising energy use for industry and on a more local level. Greater market penetration of hydrogen in any sector will lead to larger-scale production and then lower prices, so its growth in areas outside transportation bears watching. The United Kingdom is exploring the possibility of converting its gas grid to hydrogen with its ongoing North of England H21 project, due to begin in 2028. Residential and commercial heating and cooling accounts for about 40% of final energy demand in Europe, so even a partial shift away from gas for heating will have a profound impact on gas markets. IHS Markit research suggests that early adopters of hydrogen deployment in Europe could see a 64% displacement of hydrocarbons in power and an 80% displacement in heat demand by 2050. Regarding such strides in transportation, research by the California Air Resources Board indicates that HFCVs could displace 16.5 MMbbl of petrol per year by 2030 in the US state alone.

For HFCVs to have any chance at significant market share, the fuel cost must come down to be at least somewhat competitive with not only BEVs but traditional petrol. Contending with the future variations in the costs of both electricity and petrol, plus assumptions regarding increases in efficiency across all categories of vehicles make forward looking calculations nebulous at best, but the California Energy Commission has published moderately optimistic figures. Hydrogen fuel prices currently average around USD 14 per kg, which is equivalent to USD 1.50 per litre (USD 5.60 per gallon) of petrol, representing a roughly 28% premium to current, average California prices. The other selected countries pursuing HFCV deployment have average prices currently ranging from USD 1.09 per litre (USD 4.13 per gallon) in China to USD 1.65 per litre (USD 6.27 per gallon) in Germany, which will certainly allow fuel cells to be more competitive once they come down further. The United States' National Renewable Energy Laboratory estimates that hydrogen fuel prices may fall to USD 8 - 10 per kg in 2020 - 2025, while other projections by the International Energy Agency (IEA) suggest that the cost to produce emissions-free hydrogen may not come down sufficiently for widespread deployment until the 2030s. The Japanese government, for one, has defined a stretch goal of reducing the price of hydrogen to 20% of its current levels by 2050.

At the moment, it appears that success for hydrogen fuel cell vehicles will depend on the investments that governments are willing to make in infrastructure, as part of a multi-pronged approach to decarbonisation, especially where stresses on electricity grids may emerge and more avenues for energy storage are required. Private companies are getting in on the action as well. In late April, Germany's Bosch, the world's largest supplier of auto parts, announced a joint venture with Power Cell Sweden to create a line-up of hydrogen fuel cell products, estimating that as many as 20% of electric vehicles could be powered by the technology by 2030. Ultimately, it does seem like the success of hydrogen fuel cells will be inextricably linked to that of battery electric vehicles, but it will take some clever harnessing of the technology's advantages and investment for HFCVs to ride the electrical vehicle wave without being swallowed up by it.

Get a comprehensive, real-time view of global E&P activity with IHS Markit Upstream Intelligence solutions, including weekly analysis delivered to your inbox via the International Energy Letter(subscription required).