Hydrogen as an Energy Carrier: Can China accelerate the path down the learning curve?

Hydrogen as an energy carrier has recently attracted attention globally and in China. The Chinese government at different levels and functions have issued policies to support hydrogen development for energy use in rapid succession in the last several years, from general industry development guidance to providing financial subsidies for specific projects. Large-scale hydrogen deployment in new sectors is consistent with many of China's long-term goals including environmental protection, technology leadership, and energy supply security. 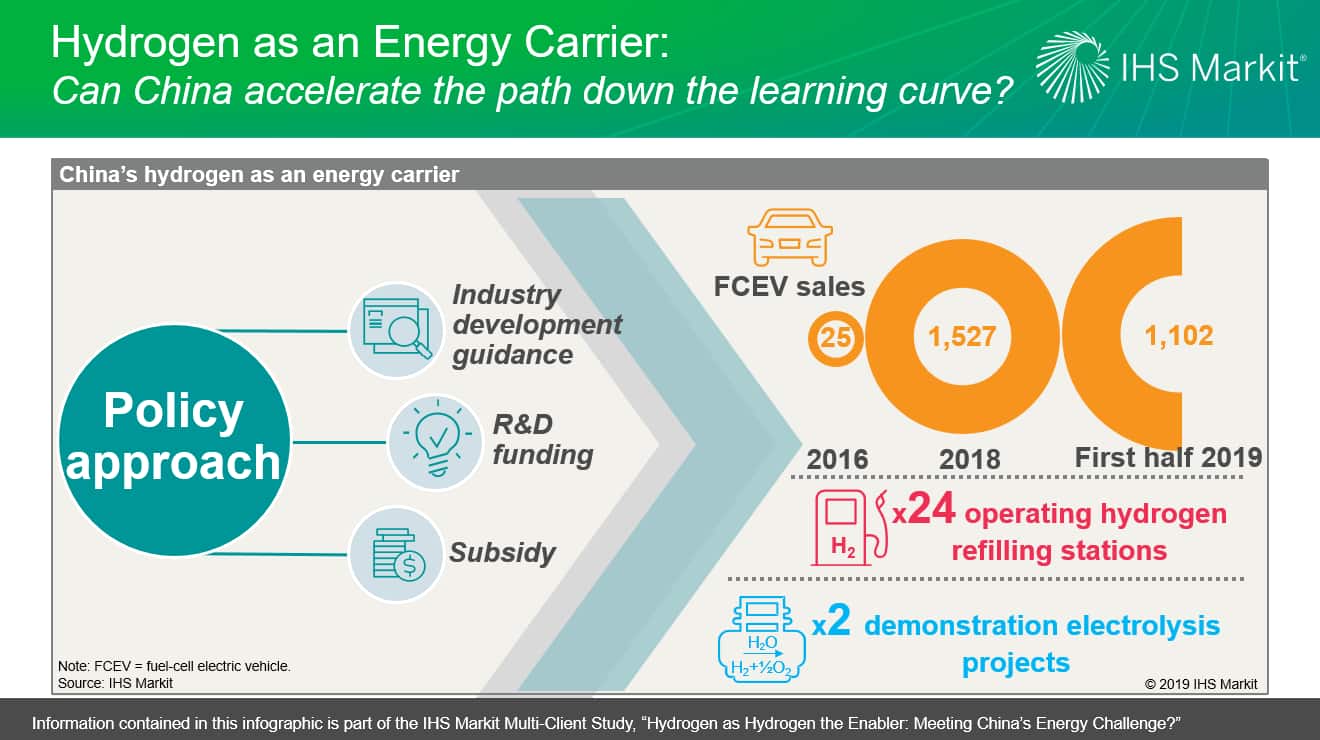 Figure 1: Hydrogen as an Energy Carrier

Policies have been targeting the transport sector, with goals to reach 1 million fuel-cell electric vehicles (FCEVs) and 1,000 hydrogen refilling stations by 2030. The government already announced the intention to phase out battery electric vehicle (BEV) subsidies but still maintains FCEV subsidies in the 160,000-400,000 yuan ($23,000-58,000) per vehicle range. By mid-2019, China had 24 operating hydrogen refilling stations, ranking fourth globally after Japan, Germany, and the United States. China's FCEVs sales have surged from less than 30 vehicles in 2016 to 1,527 units in 2018 and 1,102 units in just the first half of 2019. A total of 92 different FCEV models by two dozens OEMs are available and eligible for subsidy. Certain local governments also provide support in various forms, including additional subsidies and funds or project approval prioritization. Guangdong and Shanghai lead the country with specific hydrogen development action plans and the number of hydrogen refilling stations and FCEV fleet in operation.

The next workshop at the end of 2019 will analyze the tipping points at which hydrogen can take off in different demand sectors, including different types of vehicles in the transport sector, heat and power sector, and energy storage. These trigger points will differ sector by sector and will include optimal location of hydrogen production relative to the end-use of hydrogen.

Find out more about the future of hydrogen in China's energy mix in our multi-client study, "Hydrogen the Enabler: Meeting China's Energy Challenge?"

Jenny Yang is the research manager of the Greater China Power, Gas, Coal, and Renewables service and a key member of the IHS Markit Hydrogen team.