How the 737 Max shutdown will affect the economy

Boeing's 737 MAX line of aircraft has been grounded since last March and, beginning in April, the company cut monthly production from a rate 52 aircraft per month to 42. Even so, Boeing has amassed an inventory of about 400 MAX aircraft that cannot be delivered until they are recertified to fly. Supplier inventories have also built up. The financial pressure of continued production, even at the reduced rate, has now forced Boeing to announce a complete temporary suspension of production in early January. Because of the size and complexity of the 737 supply chain, Boeing's decision will have a material impact on first-quarter GDP growth, especially if, as seems quite likely, suppliers follow suit with slower production. 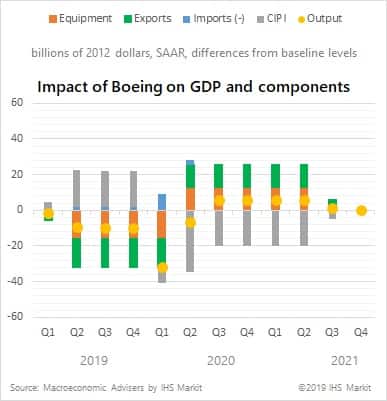 By our estimation, the halt in deliveries of the 737 MAX last March and the cut in production last April (from 52 to 42 per month) together lowered real GDP about $10 billion below baseline. The further cut in Boeing and supplier production would further lower real GDP to roughly $32 billion below baseline in the first quarter, a decline from the fourth to the first quarter of $22 billion. This decline is large enough to reduce first-quarter GDP growth by 0.5 percentage point. GDP growth will be boosted when deliveries and production return to baseline. Given that the suspension of production is within the year, there is no impact on real GDP growth in 2020 measured 4th quarter to 4th quarter, and only 5 basis points on growth measured year-average-over -year average.

Global economy to surpass pre-pandemic peak in second quarter of this year, real GDP to expand 6.0% in 2021… https://t.co/v0g9sQz8c3