How painful is it? Measuring the thresholds and distress of the OPEC and Vienna Alliance countries

With the coronavirus substantially depressing economic growth, the collapse in oil demand, and the breakdown of the Vienna Alliance that has unleashed higher crude production and exports across many major producers, the global oil market is facing a period of massive oversupply, which will only exacerbate the challenges facing major producers in the form of further oil price falls, absent unanticipated disruptions to supply that serve to rebalance the market.

Not all are equal, however. In the context of the lower oil price environment, some producers - including Saudi Arabia and Russia - have access to resources and actions including spending cuts, foreign exchange reserves, and debt issuances that could partially shield them from the worst effects of the crisis. This could create scope for a longer running price war should the two fail to agree on a new strategy for market management.

However, not all producers have ready access to such a financial cushion. And five years into the lower post-2014 price cycle, many have exhausted easier options, leaving those governments more vulnerable to the shifts, especially where this is coupled with political weakness, for example, in Algeria and Iraq. 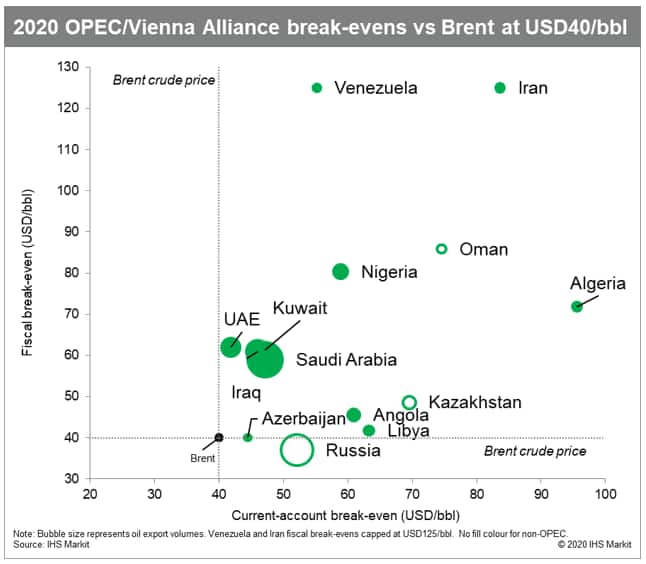 Figure 1:The bubble chart shows current and fiscal-account break-even prices for most of the OPEC and major former Vienna Alliance producers with Brent at $40/bbl.

This chart shows that most major OPEC countries and their former partners will face current-account and fiscal breakevens that are at least somewhat higher than Brent equivalent at an average of $40 per barrel. Various factors contribute to the positioning of these breakevens, but all else equal, countries' reliance on exports of oil as a share of total exports or revenues from oil as a share of total revenues are important factors in determining the impact of prices.

The current-account breakevens for the core OPEC producers, Saudi Arabia, the UAE, Iraq, and Kuwait, are relatively close to Brent equivalent, suggesting manageable deficits. This is, however, different from the situation in 2019, when most had breakevens that were lower than Brent, resulting in external surpluses.

The fiscal breakeven prices of the core OPEC states are further from Brent, implying wider budget deficits in 2020. Yet, this is somewhat less serious to the extent that fiscal affairs can generally be managed within the countries themselves.

In contrast with the four core OPEC countries, Russia's current-account break-even is further from Brent, but the fiscal break-even is lower, coming in under Brent at $40/bbl.

Figure 2: The red bar implies a deterioration in score, whereas the green bar implies an improvement in score.

Projected current-account and fiscal deficits are likely to negatively affect the above-ground risk environment in many key producer states - many of which have already experienced significant deteriorations over the past six years. These rankings draw our PEPS Oil and Gas risk methodology - which assesses risks to upstream investment based on an understanding of political, economic, and hydrocarbon-sector-specific risk factors.

From this stock chart, we can see that there have been some very significant declines across the board in this producer peer group. Some of the largest declines have occurred in Libya and Venezuela, both effectively failed states where oil price moves provide the backdrop to instability rather than a trigger. However, Algeria, Angola, Equatorial Guinea, Iraq and Saudi Arabia have also seen noteworthy cuts to their overall above-ground risk ratings that are more closely tied to the lower oil price environment.

Falling living standards in many of these producing countries have resulted in a deteriorating level of trust in governments and their legitimacy - as evidenced by increased protest risks across countries such as Iraq and Algeria. Rising political pressures have led to more policy volatility and more frequent personnel changes in the hydrocarbon sector in some cases.

Geopolitical risks have also increased, with governments engaging in foreign adventurism to distract from domestic woes, and there is a potential for further escalation if the current market environment endures. 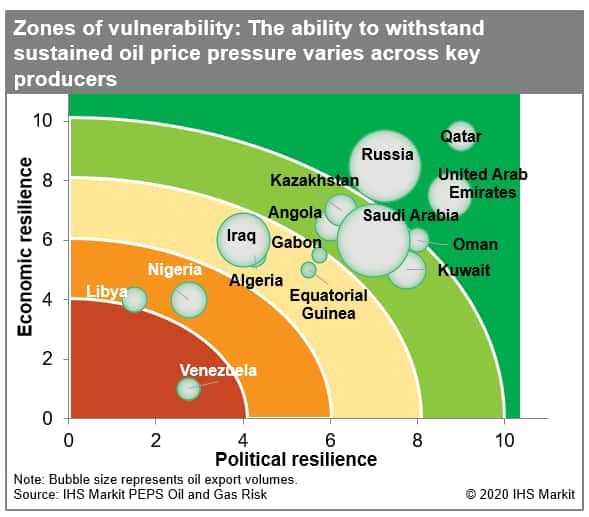 Producing countries differ markedly in their ability to navigate the current crisis. Here again, our PEPS Oil and Gas Risk scores can help assess the ability of hydrocarbon producers to weather the low oil price environment and design effective policy solutions, with political and economic metrics integral to understanding the pressures on individual producer states.

The chart above plots countries' political and economic resilience. Countries in the red zone are those that have fewer policy tools at their disposal and are more erratic in their behavior. In contrast, those further out into the green zones have more options available in terms of their ability to tap existing resources and generate support for policy solutions.

Notably, while Russia and Saudi Arabia are not the best scoring on these metrics in terms of resilience, they are better placed than a number of other producers. On the other hand, countries like Nigeria, Algeria, and Iraq are going to face difficulties through this coming cycle if prices remained at current levels.

As the risks evolve, the ongoing crisis is likely to create pressure across nearly all producers to raise revenues for oil and gas or, where countries have the wherewithal to look beyond near-term challenges, change terms to bolster production. Producing states are likely to turn to reserve drawdowns and further debt accumulations to meet current-account challenges. In the most extreme cases, a protracted price downcycle could lead to restrictions on remittances, difficulties funding national oil companies, and delays to cash call payments.