How Does Algeria Protect Foreign Investors in the Hydrocarbon Sector?

Introduction
In 2019, Algeria passed a new hydrocarbon law, Law No. 19-13 of 11 December 2019, to generate more investment in the upstream industry.

While this law has yet to produce a significant increase in investment in the hydrocarbon sector, there is investor interest in Algeria's new legal and fiscal framework, especially regarding the investment protections available to foreign investors.

Contractual and political risks are two of the main concerns of investors in Algeria. Concerns about investment protection available to foreign investors in the country are justified as, over the last few years a number of disputes (between contractors, on the one side, and the national oil company, Sonatrach, or the government, on the other side) have resulted in arbitrations.

The purpose of this legal insight article is to provide a general analysis of the two main investment protection tools generally offered to foreign investors: arbitration and a bilateral investment treaty (BIT). 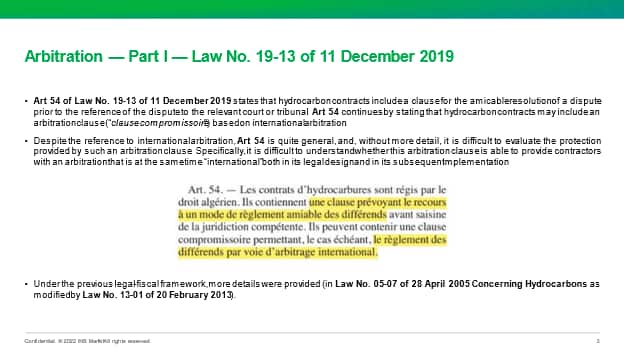 Although it precedes the 2019 law, the 2004 Model Production Sharing Contract (PSC) may offer some guidance on how the arbitration clause in hydrocarbon contracts based on Law No. 19-13 of 11 December 2019 may look.

Art 34.2 Arbitration of the 2004Model PSC states that:
- If a conciliation attempt is not successful, the parties must resort to an ad-hoc arbitration (with a three-arbitrator panel) according to the UN Commission on International Trade Law (UNCITRAL) rules.
- The parties designate the International Chamber of Commerce (ICC) as the authority to appoint the arbitration panel.
- The applicable law is Algerian law, specifically Law No. 86-14 of 19 August 1986 (as amended - this law was the then upstream hydrocarbon framework law) and its related regulations.
- The place of arbitration is Geneva, Switzerland - in our opinion the French word "lieu" refers here to both the "seat" and the "venue" of the arbitration.

Since 1988, Algeria has been a signatory to the United Nations Convention on the Recognition and Enforcement of Foreign Arbitral Awards of 1958 (the New York Convention). This is an additional guarantee to foreign investors, as Algeria's courts generally grant enforcement to an arbitral award obtained in other New York Convention contracting states. 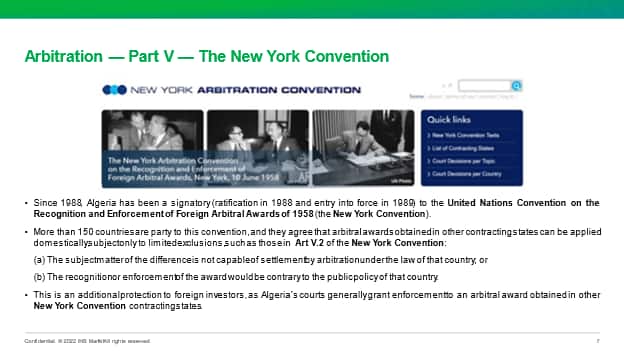 Bilateral Investment Treaties (BITs)
Algeria has a network of BITs (and Multilateral Investment Treaties (MITs)) that may offer various substantive investment protections - for example, fair and equitable treatment (FET), compensation because of expropriation, and a most-favored nation (MFN) clause. The substantive protections across the range of the signed BITs are mostly standardized, but there may be differences. It is important to check the wording of the BIT being relied on.

Almost all Algeria's BITs provide a list of the assets included in the definition of "investment," but the list is accepted as non-exhaustive. Generally, rights granted by law or contract, including concessions granted for prospection, exploration, and extraction and exploitation of natural resources, are included in the definition of "investment."

Some BITs state that if negotiations are not successful, arbitration is the only means to resolve a dispute. Some of these BITs provide the option of choosing from the International Centre for Settlement of Investment Disputes (ICSID), UNCITRAL, or an Arab Investment Tribunal of the Arab Investment Convention arbitration. However, most of Algeria's BITs permit a choice between the local courts and some arbitral institutions.

Moreover, though investors generally recur to the protections offered by BITs only as a last resort procedure, Algeria has a network of BITs, which may offer various substantive investment protections (FET, defence against expropriation, and an MFN clause). The substantive protections across the range of signed BITs are mostly standardized, but there may be differences.

This article is an excerpt from the longer, more detailed, legal insight "Investor Protections in Algeria," delivered to you by the Petroleum Economics and Policy Solutions (PEPS) service.

The full report is available to our Connect subscribers.