How decarbonisation policies will transform the biofuels industry

The climate change debate is leading to an increased interest in renewable fuels. COVID-19 has not changed that. All around the world, governments continue to look at ways how to mitigate emissions from households, industry and the transport sector. While some progress has been made with regards to the former two sources of greenhouse gas (GHG) emissions, the latter has proven more difficult to tackle.

One approach to improve this is a change in the way biofuels policies are designed. While earlier schemes normally provided for specific volume or percentage targets for the blending of biodiesel or ethanol that needed to be met, more recent efforts focus on GHG savings that transportation fuels need to achieve. This change in emphasis has far-reaching consequences.

The most obvious is that GHG savings are now at the centre of interest whereas they had been a (although welcome) side-effect of the earlier policies. Less obvious but nonetheless crucial is that these decarbonisation programs are agnostic with regards to the fuel pathways that result in GHG savings.

Of course, biofuels remain the most obvious solution to achieve these targets as they are available in meaningful volumes, can be used in the current fuelling systems and power-trains and produce much lower GHG emissions when compared to fossil fuels.

However, they are not the only ones and future technological developments in low-carbon generation of electricity or hydrogen could break the current dominance of renewable fuels in this field. This shift makes these policies less vulnerable to critics that say that biofuel policies had become an unsustainable way of support for agricultural interests that re-allocate valuable resources away from food and feed to energy markets.

At the same time agriculture is losing a captive market which in the past has proven to be an important source of extra revenue and provided a long-term perspective. 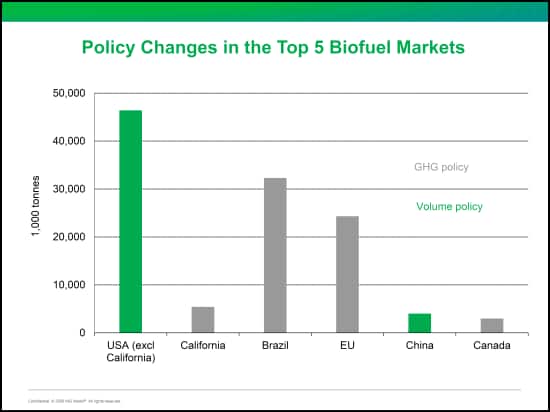 The year 2009 marked a watershed in the way policy-makers tried to tackle the problem of greenhouse gas emissions from transport.

In the US, California's Air Resources Board defined the Low Carbon Fuels Standard (LCFS), which then took effect in 2011. This measure laid down that the CO2 emission from transport had to be cut by 10% by the year 2020 from a 2010 baseline.

In 2020, RenovaBio kicked off in Brazil aiming lowering CO2 emissions from transport by 10% by 2028.

Finally, the Canadian government is working on a Clean Fuels Standard which targets to reduce emissions by 13% by 2030.

These examples show that the climate change debate is increasingly influencing the way transportation fuels will be formulated. 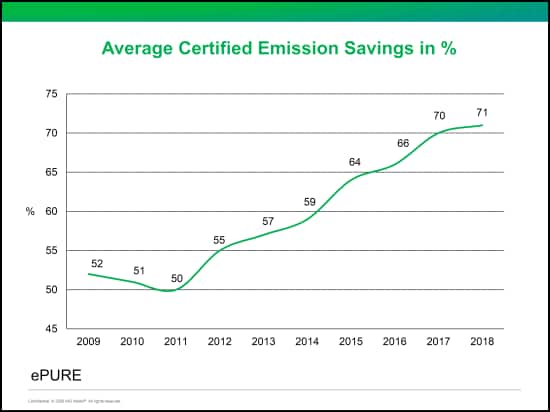 The US is the world's biggest transportation and biofuel market. Therefore, any decision taken there will have an effect on the rest of the world as well in terms of supply and demand but also in the way regulatory rules will be crafted.

The dichotomy between California and the rest of the nation is an interesting one as it highlights how different views on the roles of biofuels can result in very different policy responses.

The federal Renewable Fuels Standard (RFS) is a piece of legislation with a primary focus on blending targets. CO2 emissions also play a role but come in the form of minimum standards which have not changed since the early days of the program

The RFS distinguishes between three types of biofuels:

In a 2019 report the USDA found that corn ethanol on average saved 39% of GHG when compared with standard gasoline. This is much lower than what is found in other parts of the world and can be interpreted as a direct consequence of the volume targets in the RFS where emissions do not really matter. Therefore, it did not make economic sense to invest in technologies that could help to increase the savings. Instead, distillers successfully focussed on yields and costs. For many years now, US corn ethanol has been the cheapest molecule on the market.

The USDA also found that there are plenty of opportunities to improve the emission profile to a saving of up to 70% with relatively little effort. The fact that this has not been done shows that currently plants have been optimised with an exclusive eye to the volume aspect in the RFS.

In contrast to this, the emissions of ethanol consumed in California have been falling over time. In 2019 ethanol had a carbon intensity (CI) of less than 60 g of CO2 per MJ, a record low. This compares with a default value for gasoline of over 100 grams and therefore a saving of more than 40% which is better than the US average.

Agents respond to the incentive structure enshrined in the respective program. If the focus is on volume, distillers will produce that volume while trying to minimise cost. If CO2 savings are at the centre of interest, distributors will try to meet those at minimal costs. Both types trigger innovations but the multi-faceted nature of the CO2-based targets offers more opportunities for creativity. Therefore, technological change in the first case is likely to be incremental while in the latter it can be expected to be of a more disruptive nature.

Of course, this can only go so far. Ramping up corn ethanol production with generous tax subsidies (as was the case in the early years of the US clean fuels program) now looks like a less daunting task than driving down CO2 emissions in an environment where blending rates are effectively limited by existing fuel quality specifications.

Therefore, it can be observed that administrators also have to become creative in order to keep the programs on track. There are numerous ways to do that. The most important for biofuels are:

None of these steps need to be problematic with regards to the integrity of the program.

However, it leads to the second conclusion:

Program administrators are under the same sort of restrictions as obligated parties, but they sit at the other end of the table. In the end, CO2-based programs are a work in progress very much like volume-based programs are. The notable difference is, however, their bigger complexity which offers numerous possibilities for intervention. Again, responses might be more of the disruptive kind than the incremental one.

In California, biofuels still generate most of credits for the system, but administrators have recognised that other sources are needed in order not to de-rail the program. The Air Resources Board's preference in this respect is clearly for electrification as was underlined by recent amendments to the LCFS.

The emphasis on CO2 values not only has consequences for domestic producers but those in other countries as well.

What is important to note is that the falling CI values that can be observed in California are entirely the result of higher imports of sugarcane and molasses-based ethanol from Brazil (and to alesser extent Guatemala). The distilleries there achieve CI values of between 40 and 47 grams of CO2. This compares with 65-75 grams for most corn-based facilities. As the progressive schedule of the LCFS makes it ever more difficult to achieve the targets, imports of cane ethanol from overseas have become one of the few options to not go off spec.

This has been made possible by attractive price structure on the Californian market. Here, Brazilian product enjoys the base corn ethanol price plus the D5 premium plus the Californian CO2 premium. This set-up guarantees that the arbitrage is open most of the time.

This leads to conclusion No.3: CO2 based product can influence trade flows. 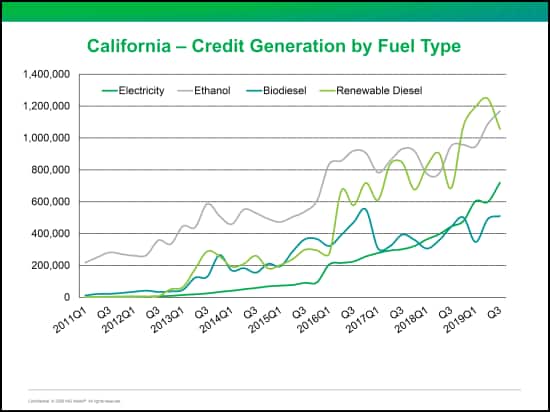 The first is a blending program not dissimilar to the RFS whereas the FQD can be likened to the LCFS.

In contrast to the RFS the minimum CO2 savings laid down in the RED are much higher. For all installations it is at least 50%; for those built after 2015 it is at least 60%.

Just like in the US case the framework resulted in impressive progress with regards to the level of emissions from fuel ethanol plants. According to industry association Epure, GHG savings rose to an average of 72.5% in the EU in 2019 compared with less than 50% in 2011.

In Germany, a country which has transposed the CO2-driven FQD into national law at a very early stage, the savings even reached an average of 84%. For ethanol it was 86% and for biodiesel 83%.

Innovation is not only restricted to the industry level. Just like in the case of the US, program administrators in the EU are very creative to meet the targets.

One very popular tool is the double counting (DC) mechanism. Biofuels that are produced from waste products can be counted double against the blending targets. This has resulted in an enormous increase in imports of used cooking oil and used cooking oil methyl ester from China. Besides, countries with DC provisions such as the United Kingdom and the Netherlands greatly increased their imports from member states without these rules. In the case of the UK, DC was so successful that virtually all biodiesel used in the country is waste-based.

In the case of Germany, where DC is not allowed, it can be observed that imports of CO2 efficient ethanol from Sweden or Belgium have increased a lot while at the same time the country exported a considerable chunk of its less CO2 efficient ethanol to neighbouring countries where this feature played less of a role.

While CO2 based policies can created trade flows they can also act as a barrier to entry. The EU is currently in deficit as far as ethanol is concerned while the US is in surplus. Part of the explanation why imports from the US remain relatively low is that the CO2 savings are simply not good enough for the EU market.

The most recent addition to the club of CO2 savers is Brazil. For decades the country had been at the forefront in terms of renewable transport fuels. Ever since the 1970s, the country operated a blending program which allows up to 27% of ethanol in gasoline and up to 10% of FAME in diesel.

With the start of 2020 this system was put on a completely new footing. RenovaBio aims to reduce the CO2 emission from transport by 10% by 2028 against a 2018 baseline. This would result in a saving of 80 million tonnes of CO2. In response to COVID-19 there is an initiative to revise the schedule downwards but at the time of writing this has not yet been transposed into law.

The program is styled after the LCFS with the notable difference that the decarbonisation credits (CBios) will be traded on the country's B3 exchange just like any other financial product.

The program is too new to tell whether similar effects will be observed as in the case of the EU or the US, but it would be surprising if it does not.

One aspect which is being criticised by Brazil's trading partners (most notably the US) is that corn ethanol is put at a disadvantage because of it higher energy intensity. So far, no US corn ethanol distiller has entered the public consultation phase of the certification process which may be taken as a confirmation of this statement. If true, the RenovaBio scheme would develop trade distorting effects even before taking off. 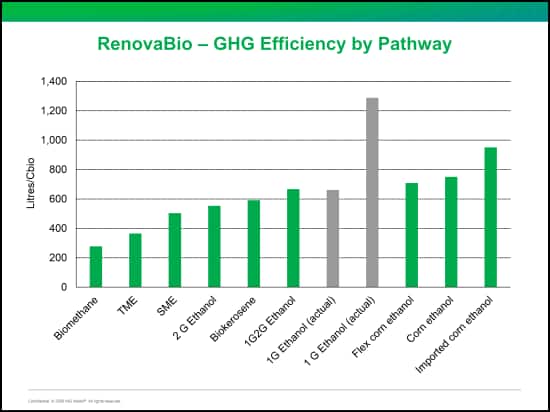 The shift from blending targets to CO2 reduction schedules will have far-reaching consequences for biofuel producers around the world. If done right, the shift can foster innovation, increase choice for consumers and sharply lower emissions from the transport sector.

However, there also are many pitfalls. The increase in complexity can result in higher regulatory cost and opens the door to misconduct.

Nevertheless, the advantages of this new approach seem to outweigh the obvious problems.

In the US a new Clean Fuels for the Midwest initiative was launched late in 2019. There are not few that consider this to be the precursor of a nationwide LCFS.

Get a deeper dive on the biofuels outlook, register for the on-demand IHS Markit webinar with Dr. Christoph Berg and James Simpson.

Bill Gates to speak at CERAWeek 2021