Blog: How COVID-19 is Crushing US Corn Prices

Do you ever think when you are driving your car that you are burning corn? Well, if you are driving in the US, you are, kind of. Nearly every gallon of unleaded gasoline in the US has 10 percent ethanol blended into it. That ethanol is derived from corn. So, in a way, every mile you drive is good for corn farmers.

With the COVID-19 mitigation measures put in place, nearly all of us are driving a lot less than a year ago—even a month. This has caused gasoline consumption to fall and ethanol demand to follow in its footsteps, which has corn prices on retreat at a very rapid rate.

It started with the Renewable Fuel Standard

The Renewable Fuel Standard (RFS) was established under the President George W. Bush Administration in the mid-2000s. This law provided subsidies to various biofuels, including ethanol, and mandated their use in the US motor fuels complex. Some countries, like Brazil, use sugar to produce ethanol but, in the US, the raw material of choice is corn. Quickly, the amount of corn going to producing ethanol went from less than one percent in crop year 2001/02 to nearly 40 percent of all corn grown in the US going to produce ethanol in 2010/11. Since then, US-grown corn going into ethanol production has plateaued at just under 40 percent of production. This has made cars burn cleaner and supported farm incomes. While the subsidies have been removed several years ago, ethanol remains an integral part of the US motor fuel complex today.

In recent weeks, efforts to slow the rate of infections of the COVID-19 virus largely have focused on social distancing and people remaining in their homes. Various government-mandated measures have spread across the country, resulting in nearly all Americans living under some sort of lock-down measure. This has caused gasoline consumption to collapse. Each Wednesday, the Energy Information Administration (EIA) reports on the state of the US energy sector. The report includes production, stocks and usage of all sorts of energy related products, including crude oil, unleaded gasoline, and ethanol. In just the past four weeks, implied gasoline consumption from the EIA data has fallen from a three-year average of 9.50 million barrels per day to below 5.08 million barrels per day—marking a 47-percent decline. 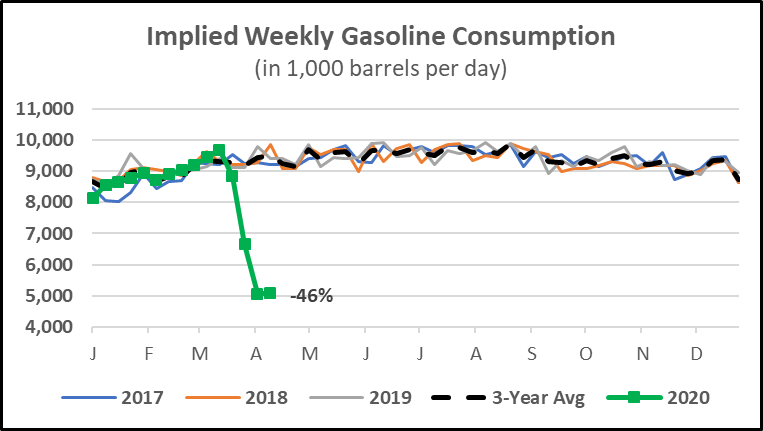 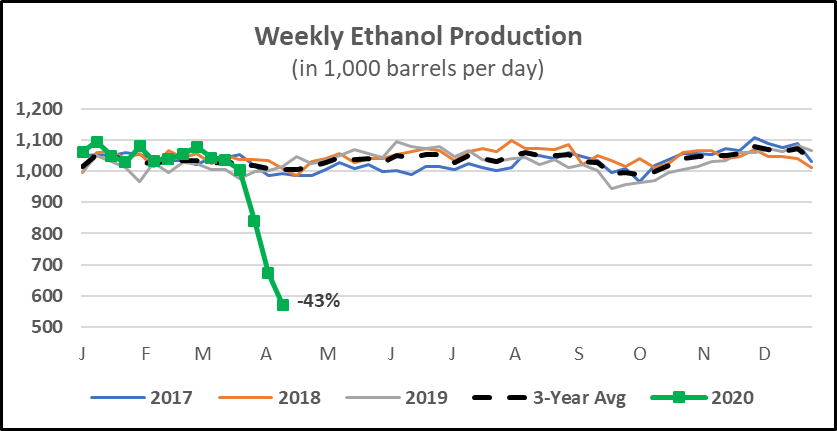 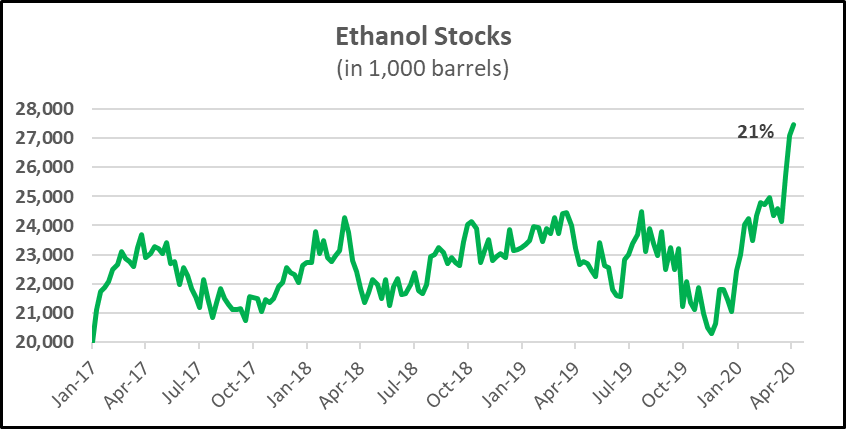 The Farmer Pays the Price

All of this matters to farmers as the slowdown in gasoline demand, which has caused a slowing in ethanol demand, ultimately is causing US corn prices to collapse. Front month corn futures now sit at $3.26 per bushel, the lowest price since September 2016. Moreover, prices have fallen nearly 60 cents since March 4, a little more than five weeks ago.